A significant event in the history of the Canadian Electronic Ensemble (CEE) took place during the last week of February, 2020: the nearly 50-year-old ensemble was engaged by Carnegie Mellon University (CMU) School of Music for a four-day residency at their Pittsburgh campus. It was one of the most ambitious and impactful tours in the long history of the CEE, a live-electronic music group that Jim Montgomery and I co-founded in 1971, together with David Grimes, who left in 1986, and the late Larry Lake (1943 – 2013) The current membership includes violinist, synthesist, composer Rose Bolton; pianist, synthesist, composer John Kameel Farah; synthesist and composer Paul Stillwell; synthesist and composer David Sutherland, as well as Jim and me. The significance of the residency, which felt at the time like it was opening up new audiences, soon revealed itself as having prepared the CEE members for a creative path through a pandemic.

The residency was organized by CMU assistant professor of Musicology, Alexa Woloshyn, who is Canadian. She created a plan that had CEE members working closely with CMU students in masterclasses, lecture demonstrations, composition workshops, and of course, live performance. “Pittsburgh and CMU have vibrant electronic music communities,” said Woloshyn. “I thought it would be great to learn from the CEE’s almost 50 years of experience in electronic sound-making and collective improvisation. The week was energizing for the students. I witnessed new and renewed interest in improvisation, modular synthesis, electronic composition and collaboration.” 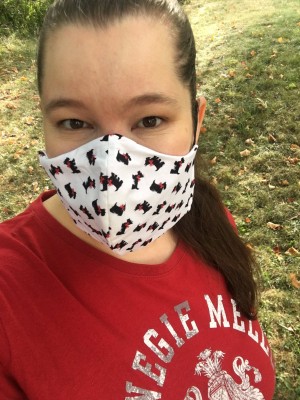 Woloshyn partnered with several of her CMU colleagues, including composer Jesse Stiles, professor of Sound Media, who directs an innovative student performance group known as the Exploded Ensemble that also works in the live-electronic music medium. The two ensembles rehearsed together and it became clear from the outset that both groups operated with similar and compatible procedures and musical languages. Stiles and Woloshyn had the idea to invite the extraordinary violinist and composer Pauline Kim Harris to join in the sessions.

Stiles wrote, “CEE visited Exploded Ensemble rehearsals several times to share their methodologies for electronic sound-making as well as their approach to improvised performance. They would set up their various mountains of rigs beside those of Exploded Ensemble and very quickly a vast neural network of audio and control cables sprawled across our rehearsal space. With roughly 20 musicians blasting out electronic sound it would be easy for matters to devolve into sonic chaos – but the Canadians were able to guide the students that comprise Exploded Ensemble through a thoughtful approach to performance that balanced listening and responding. This yielded performances with exhilarating dynamics that swept between quiet fields of spatialized chirps and squeaks to tremendous waves of drone and thrilling thunderous noise. A few days later, when the students walked onstage with CEE and Pauline, they did so with confidence and eager excitement.  That concert was one of the finest performances in which Exploded Ensemble had ever participated.” 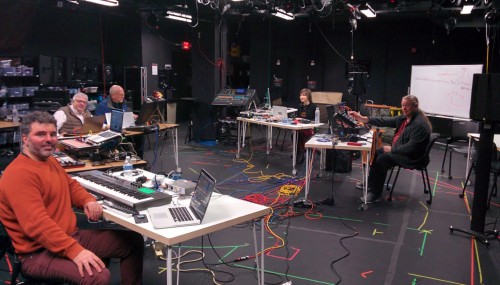 At that final concert, the two ensembles played together, and the CEE performed two of its own works, including a homage to Larry Lake, in which the CEE improvised variations on a signature Lake gesture. Lake’s Psalm for solo oboe and electronic tracks was performed by oboist Hanna Senft, a gifted graduate student. And the impressive undergraduate violist Sara Frankel delivered a brilliant performance of my Sarabande for viola and live electronics. We departed Pittsburgh on February 28 feeling gratified that we had left a positive impression with the students and buoyed with the connection our music had made. Paul Stillwell said, “The success of our recent trip to Carnegie Mellon University shows that we are relevant to both longtime fans of electronic music and younger students of the craft.”

Just a few days after our return to Toronto, we learned that the CEE was the last foreign group to be allowed to visit the CMU campus, as international borders began to harden, and then to close. But the feeling of such a fabulous visit lingered with us, and with it, a sort of creative momentum. Jim Montgomery wrote in his blog on the CEE website, “As the reality of social isolation and physical distancing set in, we decided to try doing some music while maintaining our isolation. The result: the Pass the Track (PtT) project.” 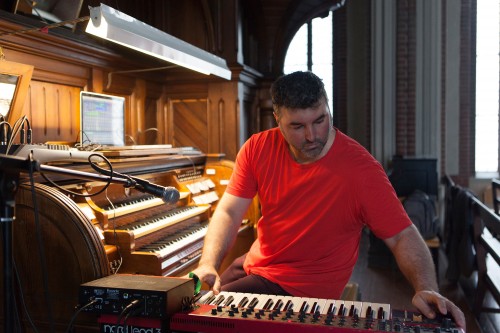 Building on the buzz – “Pass the Track

John Kameel Farah, who has had a thriving international solo career, describes what happened: “I felt unable to make solo music because of the stress and isolation of the COVID-19 pandemic, which left me feeling very little creative inspiration. I thought maybe the answer would be instead to be creative in a collaboration, so I asked Paul Stillwell to send me some electronic sounds to work with. He sent me a beautiful synth drone and I added piano over it. Then we passed it to other members of the CEE and each added another layer. After that was done, we had enjoyed it so much that we thought to do more tracks, but with each starting with a different person, each adding in a different sequence. Each got the chance to be first, last and in the middle. The biggest challenge, if you were a ‘starter’ was to try to leave enough musical space so that three or four musicians could make a meaningful contribution without feeling the space had already been taken up, or without the whole thing becoming an overflowing cacophony.” 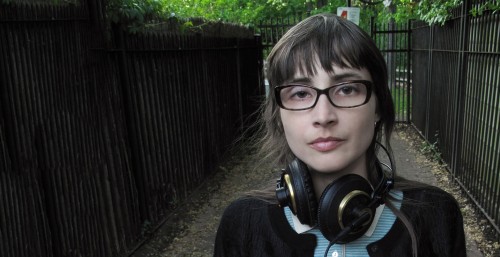 Rose Bolton further pointed out that, in the collaborative method we used, “The process of layering on tracks revealed that the person who puts down the first track in the piece, often sets the tone, shape and sound of each movement. So how each movement sounds, is greatly affected by the musical sensibility and choices that the first person has done.”

As accustomed as the CEE members were to collective composition, this was a fresh approach to collaboration, born out of the COVID lockdown, and the results were highly satisfying. It seemed that those few days on the CMU campus, steeped in intensive interaction with both students and faculty, had energized the CEE and had the members constantly engaged in demonstrating, analyzing and explaining how their music works. And it had helped to refresh the CEE’s own processes with a clarity among the members of the group, enabling us to immediately jump into the creative opportunity that the pandemic presented. No click tracks were needed as the PtT pieces came together – just the free flow of layer after layer of freshly minted electronic music that blended smoothly and naturally.

David Sutherland wrote, “When the CEE was founded, electronic music was pretty much confined to electronic music studios in universities. In 1978 Brian Eno released Music for Airports and called the music ambient. Today there are thousands of people around the world who make ambient electronic music and they have no connection to universities. This expansion of interest in electronic music has both created a much larger audience than existed in the 1970s and in some ways made our music less exceptional.

“What surprises and delights me is how well the recordings of the past stand up in today’s music, and how well we can still play together. In some of the later tracks, there is some really outstanding playing that would stand on its own compared to much of the music produced today. Then you have everyone else adding to the whole and, where I thought there wasn’t any more room, someone has found just the right thing. I find that quite remarkable and inspiring.”

There are now six episodes of PtT, pieces that range widely in terms of style, temperament and duration. Two of the pieces are accompanied with digital animation, the skillful work of Paul Stillwell, who also did the audio mixing. The full set of six pieces is due for fall release on the CEE’s Bandcamp page: thecee.bandcamp.com. People can have a preview right now, however, on YouTube at youtu.be/asGiXXoyC1o (PtT 1) and youtu.be/0D7QPeUcVJ4 (PtT 5).