After more than 50 years of music-making, composing, broadcasting and producing, I’m still truly amazed by what a single virtuoso voice can accomplish. And it doesn’t seem to matter what size the room or time of day. On Wednesday, April 11, I found myself at St. Andrew’s Church in downtown Toronto listening, at noon, to the brilliant young soprano Maeve Palmer. Palmer was the second-prize winner in last year’s Eckhardt-Gramatté competition. She and her accompanist, Joy Lee, have been touring their “Mysteries” program ever since the 2017 competition. Mysteries of the Macabre by Gyorgy Ligeti (1923–2006) is the dramatic closing work in the touring program, and also provides the title of the recital.

Two unaccompanied pieces sung by Palmer struck me the most. Djamila Boupacha by Luigi Nono (1924–1990) and Montreal composer Philippe Leroux’s Ma belle si tu voulais revealed the remarkably expressive power and presence a virtuoso singer can achieve. Palmer’s agile voice created all manner of nearly indescribable feats: rapid leaps, arpeggios, purring, cooing and percussive effects, as well as seductively sweet tonal shadings, rendering the listener helpless to fully comprehend the subtlety and range of the sonic feast she was sharing. Palmer and Lee also performed arias by Kaija Saariaho and Nicole Lizeé. Lizeé’s Malfunctionlieder, the compulsory work at the 2017 Eckhardt-Gramatté competition, calls on both singer and pianist to execute remarkably theatrical interactions, not only with one another and their numerous props (telephone, teapot and teacup, ripped book pages, etc.) but with electronic media, both audio and video.

The Palmer recital was presented by TO.U Collective, led by artistic director Xin Wang, herself a soprano of extraordinary gifts. Both Palmer and Wang are former students of Mary Morrison at the University of Toronto Faculty of Music. Morrison’s legacy of producing great singers is undeniable – Barbara Hannigan is another of her remarkable protégés. Morrison and her teaching colleagues at U of T have made Toronto a mecca for singers, both for the opera stage and the concert hall.

And, speaking of the TO.U Collective series of concerts, I note that their presentation on Sunday, May 27 is in a different venue, Rosedale Presbyterian Church. “TO.U is looking forward, for some of the more delicate repertoire, to our first concert in this smaller, quieter and more intimate space,” Wang says. The concert takes place at 4pm, and, sure enough, it includes the superb soprano Xin Wang, singing the sublimely spiritual music of Giya Kancheli from the Republic of Georgia, and dazzling vocal effects in songs by Toshio Hosokawa. Guitarist Rob MacDonald, saxophonist Wallace Halladay, pianist Stephanie Chua and violist Ethan Filner complete the ensemble. The instrumentalists will also play music by Hindemith and Fuhong Shi. 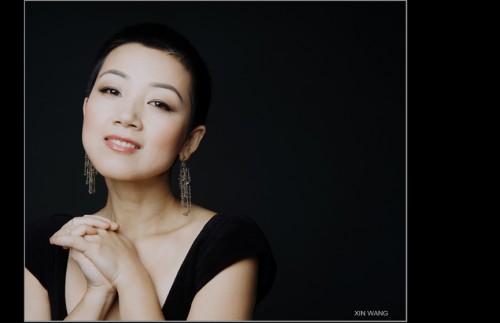 But back to April 11: I found it most interesting that, as I made my way to Maeve Palmer’s TO.U recital, I entered a TTC subway car and found myself face to face with David Perlman, the publisher of The WholeNote! David was making his way to the Richard Bradshaw Ampitheatre to hear yet another young vocal virtuoso, Sara Schabas. Schabas is a highly accomplished U of T grad, a student of Jean MacPhail. She presented a “Holocaust Remembrance” program (together with piano accompanist Geoffrey Conquer and violinist Laura D’Angelo) of music by two composers who died in the Holocaust, Viktor Ullmann and Carlos Taube, followed by Jake Heggie’s one-act opera for solo voice, Another Sunrise, about Holocaust survivor Krystyna Zywulska. (The Heggie work, sung by Schabas, was presented this past February by Schabas’ own fledgling Electric Bond Opera Ensemble, fully staged and paired with Farewell, Auschwitz, a song cycle for three singers by Heggie based on poetry by Zywulska.)

On a personal note, another astounding young soprano I’ve had the pleasure of working with, Christina Haldane, a singer in the DMA program at the U of T Faculty of Music and a student of Darryl Edwards, will be in the studio this month recording a song cycle written for her dazzling, unaccompanied voice. The work in question is the Echo Cycle, with words by Seán Haldane, Christina’s father, a poet and novelist with a long list of published work. The music is by me. I was so impressed by the beauty and versatility of her singing, and by her father’s strikingly musical poetry, I felt compelled to set six of his poems specifically for her voice. The cycle had its premiere exactly a year ago, at Gallery 345 in Toronto. The recording will be available to the public upon completion of the project, which also includes music by Carl Philippe Gionet, Samy Moussa and Oscar Peterson. Watch for it!

With all these thoughts of high-achieving young sopranos swirling around, it seems somehow fitting that, on Friday, April 13, the jury for the 2018 Glenn Gould Prize named American soprano Jessye Norman its latest winner. Norman is the first-ever female recipient of this major award, an acclaimed singer whose long career has included epic accomplishments both on and off opera stages, recital halls and in recording studios. The jury’s citation stated: “Her triumph is an expression of the power of art to transcend all human boundaries.”

And, I might add, an expression of the way the virtuoso solo voice can distill and then unbottle the power of art.