Known as the dean of Canadian choral conductors and called a Canadian choral visionary, Elmer Iseler (1927–1998) will be celebrated in a concert titled “Joyful Sounds, a Tribute to Elmer Iseler, 1927–1998 – Twenty Years Later” on April 14 at 7:30pm at Eglinton St. George’s United Church. Lydia Adams will lead the Elmer Iseler Singers in a program of Canadian choral classics, plus the world premiere of a major new work, commissioned to honour the 20th anniversary of his passing. And I will be part of it too.

Iseler was a champion of Canadian music, and throughout his career he commissioned and performed numerous works by Canadian composers. By the time he founded the Elmer Iseler Singers in 1979, the commissioning of original Canadian works had become a cornerstone of Iseler’s artistic mindset. The Elmer Iseler Singers Choral Series of published choral works contained hundreds of works, 90 per cent of them by Canadian composers. Iseler’s spirit of embracing Canadian choral music inspired Lydia Adams, the current artistic director of the choir, and Jessie Iseler, Elmer’s widow and the choir’s general manager, to shape the April 14 tribute program with Canadian music to celebrate Iseler’s legacy. For all those reasons, when they invited me to host the event I did not hesitate to accept.

The premiere of a major new work by British Columbia composer Imant Raminsh (b. 1943) headlines the tribute concert. Raminsh told me that a number of years ago Lydia Adams had approached him to discuss the creation of a major new work to celebrate both the legacy of Elmer Iseler, as well as the occasion of Canada’s 150th year. Thanks to a private donation from Elizabeth DeBoer and Ross Redfern, the Elmer Iseler Singers were able to commission the large-scale work, titled The Beauty of Dissonance, the Beauty of Strength, which runs over 40 minutes, in eight movements. Raminsh took two years to gather poetry from all the regions of Canada; he told me that he and Iseler shared a love for the Canadian landscape, and this shared passion informed the design of the new work. The two men had met in the 1960s at the University of Toronto. Iseler saw the score to Raminsh’s Ave verum corpus, liked it and took it into his repertoire, the first of several Raminsh works he championed. 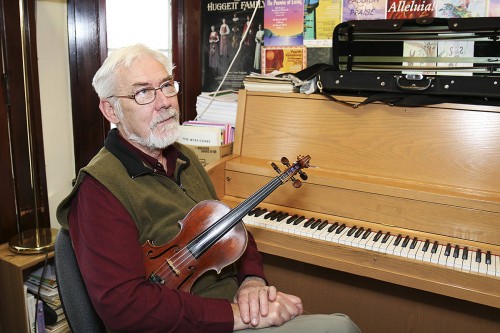 The title of the new work comes from its central movement, which uses a poem by Montreal poet Arthur James Marshall Smith (1902–1980) called The Lonely Land, a depiction of the Canadian Shield inspired by a 1926 Group of Seven exhibition. Raminsh shared with me that he grew up the son of a forester, whom he described as, “an amateur painter of some accomplishment.” His father was fond of the approach of the Group of Seven landscape painters, and Raminsh recalls that the many paintings by his father adorning his family’s home showed a strong affinity with this style.

This early exposure to landscape painting left a deep impression on Raminsh. His concept for this new work was to reflect the many regions of Canada, which led him to poets such as Newfoundland’s Agnes Walsh (b. 1950); Milton Acorn (1923–1986) of P.E.I.; Quebecer Anne Hébert (1916–2000); Barbara Klar (b. 1966) from Saskatoon; Frederick George Scott (1861–1944), known as the Poet of the Laurentians; English-born Vancouverite, Marjorie Pickthall (1883–1922); and Mohawk-English writer and stage performer, Pauline Johnson (1861–1913). The work’s eight movements are highly contrasting in mood and temperament, appropriate to the range of the poetry. The choir is accompanied by an instrumental ensemble that includes flutist Robert Aitken and clarinetist James Campbell.

So what was it about Elmer Iseler that made him unique among choral conductors? In preparation for the upcoming concert, I asked a number of current and past members of his choirs for their insights and memories.

Current artistic director Lydia Adams remembers how after returning from England, studying at the Royal College of Music and the National Opera Studio, and having learned so much from Sir David Willcocks (1919–2015), “it was more than interesting to find myself working with Elmer and his marvellous choir. As the pianist for the Elmer Iseler Singers, I was able to watch, listen and discover how he was able to make magic with sound, and I watched as he crafted the sound to reflect the music. Everything was always connected to the text and the music reflecting that text. Nothing was ever sung in an ordinary manner. Every musical moment had a purpose and a musical and emotional intent. Elmer lived in a rarified space of creating magic with sound, and he inspired so many of us to do the same. How fortunate we were!”

Robert Missen, who sang in all of Iseler’s professional choirs and who serves as the Elmer Iseler Singers’ artist representative, also commented on Iseler’s craftsmanship. “His rehearsal techniques were second to none, his ear unerring,” he writes. “On the road he would nimbly make adjustments to turn unfamiliar venues into as congenial a choral acoustic as possible. A consummate showman, he created programs that appealed to a broad range of audiences. He would always include a huge proportion of Canadian works, including popular folksong arrangements such as Song for the Mira.” By the time of his death in 1998, writes Missen, Iseler had garnered high praise from some of the world’s most distinguished choral eminences, including Britain’s Sir David Willcocks, Estonia’s Tõnu Kaljuste and America’s Robert Shaw and Margaret Hillis. “Canada is a major force on the contemporary international choral scene thanks in no small part to Elmer Iseler.”

Maggie McCoy, a student of Iseler and now the director of marketing for the Ottawa Choral Society, remembers Iseler’s talent as a teacher. “Elmer Iseler was possibly the most important influence on, not just my musical education, but on my entire way of seeing the world,” she says. “He was a kindly but challenging teacher who taught his students to seek beauty... in music, in literature, in art, in the heavens, and most importantly, in the small miracles of the natural world. I don’t really know who I would have become if I had not met him as a young person. He opened my eyes and my mind.”

Stephen Powell, a tenor in the Elmer Iseler Singers from 1991 to 2005, says this: “Interpretively, Elmer was a man of the big phrase, and by phrase I don’t mean notes simply linked together, but rather an overarching musical concept encompassing the entire musical content. ‘No two notes,’ he said, ‘should ever sound the same.’ Powell recalls how in the spring of 1997, shortly after his return from brain surgery, “Elmer was rehearsing with us Healey Willan’s short motet Who is she that ascendeth? which begins with three 4/4 bars scored for double soprano and alto. As he worked on this section repeating it several times, I realized that every beat in every bar was laden with purpose and meaning. The master was back.

“For me, Elmer was one of the greats and I’m glad to have worked with him so closely. Beneath his musical proficiency there was passion, warmth, commitment and meaning, all providing a musical outlook which I could relate to strongly and which influences me to this day.”

Jean Stilwell sang in the Festival Singers under Iseler, along with her mother, Margaret Stilwell. Jean was 18 years old at the time. “I’d had approximately ten voice lessons. I sang for Elmer with a mind to sing in the Mendelssohn Choir. Instead he invited me to sing with the Festival Singers, which was the professional nucleus of the Mendelssohn Choir,” Jean says. “It was a great honour for me. The greatest joy was sitting beside my mother making beautiful music together for seven years. We made up the second alto section. She taught me so much. I expect Elmer knew she would make sure I was well prepared for rehearsals and concerts. The first piece we worked on was Bach’s cantata Lobet den Herrn. Elmer did a fabulous job preparing us to perform it. His attention to detail and musical expression was such a joy of which to be a part.”

Conductor David Christiani was artistic director and choirmaster of the St.-Lambert Choral Society in Quebec for 35 years and remembers [Iseler] talking a bit about airplane travel. “[It] surprised me, knowing how nervous it made him to travel that way,” Christiani recalls. “He told us that when the planes are thundering down the runway for takeoff, at one point the pilot tells the control tower, ‘We are committed’ when the wheels are about to leave the ground and the plane enters into full flight. He said that was the kind of singing he wanted to hear in the music we performed. It is that kind of commitment that has always marked our performances, be it by the Festival Singers or the Iseler Singers and it is that committed singing that …o, Lydia [Adams] and Jessie [Iseler], are keeping alive today.

“I remember all too clearly that, when he passed into heaven far too soon 20 years ago, that great man’s spirit renewed that flame in me as a conductor. Suddenly everything that I did in music became that much more in earnest and that much more committed. Long may it inflame the singers and conductors of tomorrow to remember and preserve his legacy.”

And finally, Carol and Brad Ratzlaff both sang for Iseler, and both also became choral conductors. Carol Ratzlaff remembers: “Brad and I spent the first years of our marriage in EIS with Elmer conducting, 1985 to 1988. These years were a gift which we still treasure. They were busy touring years and offered rich musical experiences which were diverse and challenging. Elmer has had a profound effect on our music-making at every level. His steadfast commitment to and belief in the choral art as an essential part of life has unceasingly inspired my work. I would say that my own sense of calling and unswerving commitment is, in part, due to my musical roots as a very young singer and conductor with Elmer. He had a singularity of purpose, was passionate and stubborn beyond anyone I had met. That awakened something in me, perhaps a sense of calling. I know that Elmer would be proud of our work in VIVA! Youth Singers. He was so supportive of my teaching career, and always interested in what Brad and I were creating. We miss him.”