It was a pleasant, late summer sunny day, and I was having a nice, relaxed conversation with composer Elisha Denburg, at the Canadian Music Centre on St. Joseph St. in downtown Toronto.

Denburg serves as the general manager of the Canadian League of Composers (CLC). We were reflecting on the coming uptick in CLC activity towards the end of October, as the pre-eminent annual international contemporary music festival, the ISCM World New Music Days, approaches, returning to Canada for the first time since 1984, and to Vancouver for the very first time.

The CLC is home to the Canadian Section of an international organization, the International Society of Contemporary Music (ISCM), which sponsors this contemporary music festival each year in a different country. The stated purpose of the festival is to “present music from each of our members, showcasing the incredible diversity of musical practice in our time.” 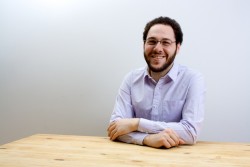 In the course of our conversation, Denburg reminded me that the previous time the ISCM festival was in Canada, in 1984, it was not the CLC, but rather the now defunct Canadian Music Council (1946–1990) that hosted the Canadian Section of the ISCM, and thus the festival. His observation triggered a flood of memories for me, as I vividly recalled participating in that earlier edition of the festival, both as a broadcaster with CBC Radio, and as a composer/performer with the Canadian Electronic Ensemble (CEE).

The 1984 ISCM festival had been a grand event, held over 13 days, with concerts presented in both Toronto (September 21 to 28) and Montreal (September 28 to October 3). Many of the concerts were recorded for broadcast on CBC’s English and French language radio services, including those heard on Two New Hours, the national network new music series I had created in 1978.

Over the course of the festival, a great number of new and recently composed works by internationally recognized composers were performed, including those by Canadians such as Serge Arcuri, John Burke, Brian Cherney, Micheline Coulombe St.-Marcoux, Denis Gougeon, Alex Pauk, John Rea and many others. Esprit Contemporaine (now Esprit Orchestra), only in its second season, gave the world premiere of one of Cherney’s most important works, Into the Distant Stillness, as well as the Canadian premiere of Ritratto by Finnish composer Magnus Lindberg. Toronto’s New Music Concerts presented the Canadian premiere of Laboratorium by French composer Vinko Globokar. The CEE presented the Canadian premieres of two outstanding electronic compositions, Klang by British composer Jonty Harrison and Love in the Asylum by American Michael McNabb, as well as repertoire works by the members of the ensemble: David Grimes, Larry Lake, Jim Montgomery and me. And of course, there were dozens more concerts with compositions from nearly 50 different countries.

It was not my first World New Music Days. I had also been to the 1983 ISCM festival, which had been held in Århus, Denmark. Steen Frederiksen, the head of music for Danish Radio had contracted to broadcast the entire festival on the Danish national radio network. He noted that there were an unusually large number of Canadian compositions in the programming that year, and persuaded CBC Radio Music to send me and members of my Two New Hours team to produce CBC broadcasts from Århus. Being at the Århus festival also served to prepare us for the 1984 ISCM festival in Toronto and Montreal, which had already been confirmed back in 1981.

The new concert hall in Århus had opened just the year before, and at that time was the largest in Scandinavia. We made several Two New Hours broadcasts there, and were able to include major interviews with such notable Danish composers as Per Nørgård, Bo Holton and Bent Sørensen, as well as with visiting composers from other countries. In the course of making this series of broadcasts we came to appreciate the magnitude of the organizational effort such a festival entails.

In 1990 a funding crisis forced the Canadian Music Council to fold, and the designation of Canadian Section of the ISCM was transferred to the CLC. Nineteen years later the idea to host the ISCM festival in Canada was rekindled. “I had the initial idea to do this, while talking with ISCM Canadian Section president André Ristic in June 2009, sitting outside a house in Vancouver after a reception,” Winnipeg composer Jim Hiscott told me. “I had just been elected as vice president of the Canadian Section, and was thinking about how great it would be to have the festival in Vancouver. Many new music groups are in the city and province, and there’s a different aesthetic and cultural range than in most European communities. We both started developing it immediately.”

The CLC made its bid to present the 2017 edition of the festival in 2014, in partnership with the Vancouver series Music on Main and its artistic director, David Pay. The pitch was accepted, and the process of organizing and producing the concerts in Vancouver began. The first Canadian edition of the ISCM festival in 33 years will take place November 2 to 8, with more than 30 concerts and events in a number of popular Vancouver venues. The Vancouver team shortened the festival title, calling it simply ISCM2017.

Which brings us back to the CLC office and my conversation with Elisha Denburg. Near the end of October, Denburg will travel to Vancouver to set up and host the Festival Hub, a centre for festival information which will act as a space that provides opportunity for artists, delegates and audience members to connect, network, share resources and refresh between concerts. The Festival Hub will be in a space know as The Post at 750, which houses the offices of Music on Main near the CBC Vancouver building on Hamilton St., and close to many of the concert venues. There will be concerts at The Centre in Vancouver for the Performing Arts, Christ Church Cathedral, the Orpheum, The Annex, the Roundhouse, UBC School of Music, Vancouver Playhouse and the Vancouver Public Library.

There will be many programming highlights during ISCM2017, as can be expected in a festival this large. Artistic director David Pay was successful in attracting a number of touring groups, including the National Arts Centre Orchestra and music director Alexander Shelley; the Ensemble contemporaine de Montréal; the Aventa Ensemble; Land’s End Ensemble; the Bozzini Quartet; and the Victoria Symphony, as well as a number of internationally recognized soloists. Add to these the many local Vancouver ensembles, such as the Vancouver Symphony Orchestra, the Hard Rubber Orchestra, the Turning Point Ensemble, the Vancouver Chamber Choir, Elektra Women’s Choir, musica intima, the Emily Carr String Quartet, the Standing Wave Ensemble and many more, and you realize that this is an event of enormous scale and potential impact on new music in Canada.

There are too many concerts to single out a fair selection of significant works to be performed. Having said this, I will confess that, on my personal wish list, I’m eager to hear violinist Andréa Tyniec give the world premiere of Evta, Ana Sokolović’s violin concerto, with ECM+; as well as Land’s End Ensemble performing Omar Daniel’s compelling Trio No. 2; and a late-night, free concert in the atrium of the Vancouver Public Library’s downtown branch, featuring the spatially deployed Redshift Vertical Orchestra, with surround sound performances of music by seven Canadian composers – Jordan Nobles, Lisa Cay Miller, Alfredo Santa Ana, Rita Ueda, James Maxwell, Tim Brady and Benton Roark.

(None of this, of course, can happen without significant resources, and the ISCM2017 team acknowledges the Department of Canadian Heritage, the Canada Council for the Arts, Creative BC and the Government of BC, the City of Vancouver and the SOCAN Foundation as its major funders.)

If you’re able to be in Vancouver the first week of November, it’s an opportunity to hear some of the best new concert music in the world. As of this writing, two of the concerts have been cleared for what the festival team are calling viewing events. See the ISCM website for up-to-date information. There will also be a documentary of the entire festival, scheduled for release later in November.