Perfection, and in particular, the pursuit of perfection in the performing arts, can be an infectious thing. An artist who has attained a high standard of perfection cannot tolerate anything less than that standard in their ongoing work.

Thus it was with pianist, composer and media artist Glenn Gould, whose obsession with and ability to achieve perfection in his recordings is well documented.

I experienced this on a personal level during our work together, making broadcasts on CBC Radio during the last eight years of his life. His approach to making radio paralleled his philosophy as a recording artist: every last detail would be determined by him as the creator of an artistic act. 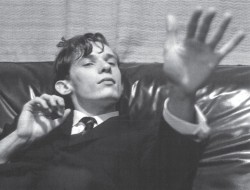 Gould and I met early in 1974, when I was producing with CBC Radio’s national network music department. This was the same music department through which Gould’s very first broadcasts were heard in the 1950s, before he signed as a recording artist with Columbia Masterworks. And it was through CBC Radio that Gould also honed his skills as a radio artist. He related so completely as an artist to the medium of radio, that his many radio documentaries were, essentially, his symphonies.

Prior to 1974, Gould had already begun to plan a series of CBC Radio broadcasts to celebrate the centennial that year of the birth of a composer he admired every bit as much as J.S. Bach or Richard Strauss: Arnold Schoenberg. Gould told me that these three composers were his avatars, and this was precisely the word he used. These were the three composers whose complex counterpoint most fascinated him, and whose music satisfied his need for a convincing musical, intellectual and spiritual discourse. The celebration of Schoenberg’s centennial was of enormous importance to Gould, and he managed to convince the senior managers of CBC Radio music to devote ten one-hour-long broadcasts on the national network to mark the occasion. The programs, naturally, would be planned, written and hosted by Gould, and much to my surprise, he approached me to serve as his producer. And so it was through an exploration of Schoenberg and his music that I came to encounter the workings of Gould’s very particular and ever so precise mind.

“Perfection was the focus of everything we did,” audio engineer Lorne Tulk, Gould’s lifelong friend, told me. It was Tulk who spent countless hours with Gould after his recording sessions, reviewing takes and marking the musical scores with him, to show where the edits would be made. Gould once proudly showed me one of these resulting “paper edits” with its detailed markings. It was a Mozart sonata, and he was eager to show me where a certain passage had been “regenerated” by Lorne and inserted into the edited master, every time that particular passage appeared. Regeneration was, to the world of analogue recording, what cloning is in the digital world.

The point was, once Gould had determined that a key ingredient of an edited performance was perfect, nothing less than that perfect representation would be allowed to stand.

Likewise, in making Gould’s radio broadcasts, every detail was scripted, including his and his co-host’s supposed personal opinions and observations. For example, there was this brief exchange in episode nine of the Schoenberg series:

Glenn Gould: Of course he did. I assumed you knew that, Ken.

Ken Haslam: No, I didn’t. That’s the most unlikely bit of casting, yet!

Such was a moment of scripted spontaneity in Glenn Gould’s wondrous world of radio. As a broadcasting collaborator, he was always inventive, provocative and stimulating, and as a friend he was delightful and considerate, if occasionally demanding, such as when his late night phone calls came at inconvenient moments.

The 85th anniversary of Gould’s birth is being marked in a great variety of ways. Perhaps the most notable of these is the release, by SONY Classical, of a new multi-disc album titled GLENN GOULD, The Goldberg Variations, The Complete Unreleased Recording Sessions, June 1955. As the title indicates, the album documents Gould’s complete takes of Bach’s Goldberg Variations from those famous recording sessions, which took place between 10 and 16 June 1955. It was the 22-year-old Gould’s debut recording for Columbia Masterworks, and took place in Columbia’s 30th Street Studio in New York.

In the extensive album booklet, writer Robert Russ calls the new release, “...the chance to attend the birth of a legendary album and gain an insight into the analogue recording process.” The booklet documents every aspect of the recording, from the background story leading to Gould’s signing his original contract, to his choice of the piano, to technical matters such as the qualities and limitations of recording to analogue tape. There’s a discussion of how the recording team dealt with Gould’s singing along with his playing, as well as a detailed transcript of the spoken exchanges between pianist and producer, associated with every recorded take. There’s also an interview with the late Howard Scott, the producer of the recording, in which Scott, among other things, comments on the advisability of such a release.

I asked Lorne Tulk what he felt of the decision to release these unedited sessions, given the constant striving for perfection in their work together. Lorne was unconcerned and of the view that Gould wouldn’t have objected. Ray Roberts, the man who served as Gould’s aide in all practical, non-artistic matters, responded to the same question somewhat differently.

“There are two sides to that particular coin,” Ray told me.

It’s a question that can never be answered definitively, but the speculation may continue a good long time, adding to the fascinating Gould legacy.