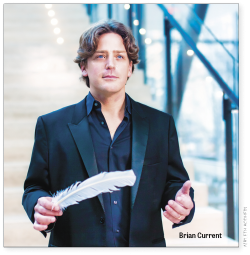 People sitting in Winnipeg’s Centennial Concert Hall on February 1, 2002, for the opening concert of the Winnipeg Symphony Orchestra’s 11th New Music Festival, as well as those listening to Two New Hours, the contemporary music series I created on CBC Radio Two, got a real jolt of high energy as the concert opened with the performance of Brian Current’s orchestral work, This Isn’t Silence. It truly was not anything resembling silence, but rather a work that quickly reached its maximum intensity and then sustained that level forcefully throughout its nearly 12-minute duration. “The notion of cranking it up and just letting it rip was borrowed from electronic music,” Current confided. In this he was also echoing the late Frank Zappa (1940–1993) who, in a 1987 interview on Two New Hours, compared writing for orchestra to creating rock music, pointing out that, “When you write fff in either case, you expect to hear some real F’s coming out.” Brian Current also admits to referencing Murray Schafer at a certain point in his composition when he requires the trombonists in the orchestra to “Howl like wolves through their trombones.”

Current had originally drafted This Isn’t Silence in 1998 while serving as composer-in-residence for the University of California Berkeley Symphony Orchestra. But he revised the work for the Winnipeg orchestra and their, by then, internationally famous New Music Festival, and this performance in Winnipeg was the premiere of that revised version. But in the meantime, Brian was also writing other orchestral music, including his superb composition, For The Time Being, the work that won him the Grand Prize in the CBC/Radio-Canada National Radio Competition for Young Composers, in its 2001 edition in Vancouver. It seemed the logical choice for me, as CBC’s delegate to the International Rostrum of Composers (IRC) in Paris, to bring Brian’s winning piece, and that prize-winning performance by the CBC Radio Orchestra and conductor Bramwell Tovey as one of CBC’s submissions to the 2001 Rostrum. It was the right decision, as Brian’s composition was selected by the IRC delegates that year as the outstanding work by a composer under the age of 30. His work would eventually be broadcast on the public radio services in all the 33 participating countries. It was also given a fresh live production by the Polish Radio Symphony Orchestra in Warsaw.

Current’s success at the IRC began a string of positive results in the international arena for the Two New Hours team’s productions of Canadian works. At the 2002 IRC, Lacrimosa, by the young Vancouver-based composer Jocelyn Morlock, was voted to the top ten list of works presented, and in 2003 it was Brandon, Manitoba-composer Patrick Carrabré, whose Inuit Games was also voted to the top list. In 2004, Dissolve, by young Toronto composer Abigail Richardson-Schulte, not only shared the award for the best work by a young composer, she was also offered a commission by Radio France for a new string quartet to be produced in Paris. Incidentally, 2002 was also the year that our production of Christos Hatzis’ Constantinople (with the Gryphon Trio plus guest vocalists Trish O’Callaghan and Maryam Toller) was awarded a medal at the International Radio Festival of New York. And there were more honours yet to come.

There was another notable development at the conclusion of that 2002 session of the IRC in Paris. After having served as CBC’s IRC delegate for 25 years, I suddenly found myself first nominated and then, elected IRC president. This was a remarkable turn of events in several respects. First of all, it was the only time in the 63-year history of the IRC that a non-European was elected its president. Secondly, aside from any personal assets I was perceived to be bringing to the leadership of the project, it signalled that Canadian music, and of course CBC Radio as its producer, was garnering an increasing amount of respect from the international delegation participating in the IRC. The investment that we at CBC Radio Music had made in Canadian music was recognized by our sister public broadcasters around the world, who showed an intense curiosity about new Canadian repertoire. And the series of Canadian composers who had been selected and recommended by this international delegation over the years, from Murray Schafer to Brian Cherney, to Chris Paul Harman, to Paul Steenhuisen, to Jocelyn Morlock, to Brian Current and others, represented an endorsement by a highly influential group of producers. This broad international recognition also began to bear another surprising result: the commissioning and production of contemporary Canadian works by foreign broadcasters. Whether it was Harman and Schafer being produced by NHK in Japan, Steenhuisen by ORF in Austria, Current by PRT in Poland, Richardson-Schulte by Radio France or Marjan Mozetich by Slovenian Radio, our steadfast development of Canadian composers had demonstrably positive and concrete results. We were, for example, able to reap the benefits of offshore productions by obtaining the rights to these performances through the system of international program exchange. Clearly, in the eyes of the world, new Canadian music, just like Current’s composition, “wasn’t silence!”

Our Two New Hours recordings of Current’s This Isn’t Silence, For the Time Being, and three more of his orchestral works were leased from CBC Radio archives by the Canadian Music Centre for their Centrediscs label and released on a CD in 2007. The title of that CD, as might have been expected, is This Isn’t Silence, and it’s still available as Centrediscs CMCCD 12607. And just as Current’s This Isn’t Silence was used to kick off the 2002 New Music Festival in Winnipeg, the very same programming idea was repeated in 2012 by the Toronto Symphony Orchestra when guest curator Peter Eötvös chose the work to open the TSO’s New Creations Festival that year.

A final footnote to this very creative and productive period of CBC Radio and Canadian musical history is that in 1998, the year Brian Current composed his energetic This Isn’t Silence, the late and highly esteemed Russian/Canadian composer Nikolai Korndorf (1947–2001) completed a CBC Radio commission, The Smile of Maud Lewis. Composed for the now defunct CBC Radio Orchestra, this work stands as one of the gentlest, most sublime works ever commissioned by CBC Radio. Nikolai Korndorf died, unexpectedly, while playing soccer with his son, 15 years ago this month. And that was a thundering silence.