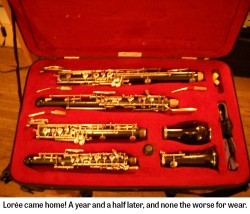 Many of you know me as the person who does display-ad bookings for this magazine. Others might remember me as the writer of the World Music column from mid-2004 to early 2011. In addition, I’m an oboist, a longtime member of the Niagara Symphony, and freelancer around the Toronto area. A year and a half ago, I did something no musician should do – I left my instruments, oboe and English horn in a single black rectangular case, in my car. Mind you, I’d been doing this for years, on all those highway stops on the way to gigs, catching a quick bite to eat, or a coffee. Why lug around more than I needed? And besides, who would know what that is anyway – the case isn’t shaped like a violin or cello, nothing to give away its contents or value.

It was September 11, 2014, and I had just driven back to Toronto from Ottawa. It was a Thursday evening and the traffic on the 401 coming into the city was heavy and slow, making the trip longer than usual. I picked up some groceries, dropped off a passenger, then instead of going home to unload my car, decided to head to The WholeNote office to catch up with some work. It was around 8pm, and I parked on Lennox St. just off Bathurst, south of Bloor, across from the Midas automotive shop. I grabbed my purse, a bag of food, and my WholeNote-related work satchel, and headed up to the office nearby. I’d glanced at the instrument case on the back seat of my trusty 1995 Toyota Corolla wagon…naw, too much to carry…and who’d know what that was anyway.

I guess I had a lot to do at the office; it was 11pm when I returned to the car, got in and drove home up toward St. Clair Ave. There was a chill in the air, but I was too tired to register the fact that there shouldn’t in fact be a breezy chill, since all my windows were closed. I parked in my usual spot behind my building and began to unload on the driver’s side. You can imagine my shock when, lo and behold, no instrument case to be found! And my blue backpack containing an old computer was also missing. Then I noticed the shattered glass, and the entirely missing rear passenger-side window.

Without going into too much detail, my feeling from Toronto police was that this was not a high priority for them. Though they assured me they were taking the case seriously, being “theft over $5,000,” it was three weeks before any investigation began. To make matters worse, the instruments were not insured. In the meantime, I needed to borrow an English horn for the opening concert of the Niagara Symphony season only a week away. (I still had my old Greenline oboe; the stolen one was a new Lorée). Gary Armstrong owner of Gary Armstrong Woodwinds, came to the rescue, and when I entered his Queen Street shop the day after the theft to pick up an instrument, he informed me he’d had a call from someone at Knox Presbyterian Church on Spadina, saying they’d found some of my stuff in their dumpster area in the laneway behind the church. They knew to call Gary, because of a repair receipt containing his info, and my name, that they’d found. I raced over – in addition to the receipt that I’d left in the pouch of the instrument case, there was my Niagara Symphony music, a reed case with my name on it, and the blue backpack, but no computer and no instruments or case. But now I knew exactly where the thief had been after the theft, to dump items that might link me to the instruments. And, there were surveillance cameras on a private garage in the laneway facing the dump site! I contacted the homeowner, but by the time police got onto the case and then waited for the camera owner (the homeowner’s son) to return to town, the footage from that evening had been erased!

I had an outpouring of support from friends and colleagues on Facebook. I posted my instrument serial numbers, which were in turn shared by colleagues to their contacts, including music stores and instrument dealers. The WholeNote ran a monthly classified ad with all the info. I posted the theft to a couple of online stolen instrument registries, looked in pawn shops, and had help from friends checking sites such as eBay and Kijiji. Time passed. Life went on. I eventually bought a used English horn, and continued to play my 20-year-old reliable Greenline oboe. I thought about my stolen instruments a lot, imagining them rotting in landfill somewhere, or perhaps enjoying a new life in China, never to be traced again. Or perhaps they were nearby, in the possession of someone wondering what to do with them.

And then the miraculous happened! Twelve days ago at the time of writing, I got a phone call from a music store not far from Toronto – they had my instruments! Someone had brought them in for appraisal. After exchanging some information, I was able to pick them up from that region’s police station. The music store wished to remain anonymous here, fearing that eventually word might leak out, deterring would-be thieves or individuals in possession of stolen instruments from bringing them in for repair or evaluation, so I am respecting that wish. But thanks to a community of individuals who spread the word, and to the on-the-ball employees of that music store who smelled a rat and checked their internal system, I have my precious instruments back, and in good condition I might add. Miracles do happen, with a bit of help from friends.