Eric Paetkau, tall and lean, appeared confident, serious and enthusiastic on a mid-November visit to The WholeNote’s office as he described the program for group of 27’s January 30 concert “Journey.” He characterized it as “ a wonderful mix of music,” from Mozart’s beloved Symphony 35 “The Haffner” to the lyrical Dvorak Romance and Andrew Staniland’s Voyageur, with Beethoven’s rarely performed, delightful 12 Contredanses broken up and interspersed between the three works. Each piece is a kind of journey, he explained, “taking you to a different place.”

Staniland’s dates from 2007 and was inspired by the adventurous, boisterous spirit the composer believed the early voyageurs must have had as they searched for a water route over the Rocky Mountains to the Pacific Ocean. “Composers at their best embody this very spirit: exploring the new and unfamiliar, charting new courses of statement and expression,” Staniland wrote at the time.

Then there were Mozart’s own travels around Europe and Dvorak’s Romance which went on a specific musical journey, beginning life first as a movement of a string quartet, only to be fleshed out and re-orchestrated when the quartet was discarded.

Paetkau began group of 27 (g27) -- “a supergroup [led by] a freelance violist with really good friends,” he called it -- with a single concert in 2007. Drawing on a base of TSO and COC orchestral players with a coterie of freelancers – he’s clearly very well connected – to add to the talent pool, he was able to cobble together additional concerts in 2009 and 2011. Two concerts in 2012 were a springboard to four in 2013 and 2014. An added recital series featuring friends or members of the group provided even more programmatic opportunities.

The latest in g27’s recital series takes the form of a holiday party December 10 in the intimate Heliconian Hall. After mezzo-soprano Krisztina Szabó, a friend, sings, accompanied by another friend, pianist Gregory Oh, she will lead the audience at this PWYC event in song in what promises to be a celebratory evening of music, food and fun.

That kind of audience participation offers a hint of Paetkau’s more ambitious outreach aims. Whether it’s working with students from the Regent Park School of Music and Dixon Hall Music School (eight of them played side-by-side with g27 in selections from Grieg’s Holberg Suite at the recent November 7 concert), contemplating pop-up open rehearsals at public spaces or toying with the idea of setting a concert in a bar à la England’s Orchestra of the Age of Enlightenment pub shows, there’s no shortage of innovative thinking when it comes to community involvement.

The Mercer disc received raves inside and outside Canada. Lynn René Bayley wrote in the February 2013 Fanfare magazine: “I was immediately captivated by Mercer’s singing and could not stop listening or write a single word of comment until the entire cycle was finished. Yes, she’s that good. This is the work of a master artist.

“In some places, it’s almost difficult to realize that it is only being played by 27 musicians, so full and rich are the textures, and Paetkau shows how good he is in shaping and pacing this music. In short, this is a “must-get” item if you are a fan of Les nuits d’été, modern music in a lyrical vein, or just plain outstanding performance quality. With this disc, Shannon Mercer shoots to near the top of sopranos I will be on the lookout for in the future, and Paetkau a conductor I’ll make note of as well.”

Fanfare’s Raymond Tuttle wrote in July 2013: “This CD introduced me to Eric Paetkau, group of 27, Shannon Mercer, and Norbert Palej. I am looking forward to my next encounter with any of them, or with all of them together, and I hope I do not have to wait too long. This is Want List material.”

Paetkau’s methodical route to making g27 viable sprang out of his vast experience as a freelancer himself, from his early days playing viola in the Nuremburg Symphony, TSO, COC, National Ballet of Canada Orchestra and Tafelmusik to three years as a conductor in Quebec, most notably 40 dates with the prestigious Les Violons du Roy.

Conducting had always been in the back of his mind. In the early 2000s he quit Nuremburg, freelanced and made the switch. School in Amsterdam and an 18-month program in the U.S. provided a very intense musical education from the basics to hours in front of an orchestra. This was on top of his earlier viola studies under the guidance of the legendary Lorand Fenyves and the tutelage of Steven Dann.

With g27’s ability to draw on Toronto’s top orchestral professionals, the musicians can do much more than in their normal concerts. In the performers’ minds, Paetkau explained, indie and classical is the same world. They might play with Arcade Fire one day and g27 the next. What matters, says Paetkau, is “the artistic integrity that has to be fantastic.”

“Musical excellence should be anyone’s goal,” Paetkau said. Knowing the score inside out is the first step in bringing out as much of the music as possible and “giving the players the confidence to explore within that realm. “I really love to learn the scores so well you can play the piece in your head the way you want it. It’s also a lot of fun when you’re off hiking or on a plane.”

Paetkau describes conducting as the conduit that translates “what is part of you to what is part of the players.” His excitement is clearly contagious. “I love it when things are really tight; I love that intensity so that every concert is an event, the connectiveness between conductor and orchestra.”

And it’s a two-way street: “The players enjoy the energy, the intensity and the musicianship; we’ve built a bond.”

You could say that g27 is where Toronto’s musicians go to play, on their day off. 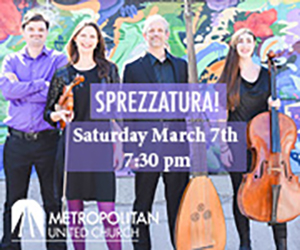