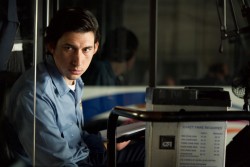 Paterson, Jim Jarmusch’s clever and captivating neo-minimalist film, chronicles seven days in the life of a Paterson, New Jersey, bus driver (named Paterson), his happy marriage and daily routine. In this city of the poet William Carlos Williams, Paterson (Adam Driver, bringing subtle levels of sensitivity to the role) is also a poet. So is Jarmusch in his own refreshingly natural and observant way. Paterson is two hours of serenity, a musique concrète of city sounds and overheard conversation, the music of daily life. The spare, ambient score is by Sqürl (Jarmusch and Carter Logan). 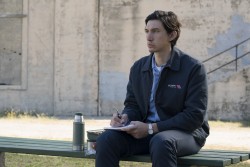 Sqürl’s tentative electronic murmurs are first heard under the film’s opening credits before morphing into warm synth electronica to accompany Paterson’s written words (we see them onscreen as he writes): “We have plenty of matches in our house.” What begins as a reference to a preceding scene where we saw Paterson examining a box of matches at home continues at lunch on a park bench overlooking the city’s Passaic River and Great Falls. After his Monday bus driving is done, he presents the completed Love Poem to his wife; it stands as a tangible memento of the day. That poem and the others Paterson composes were written for the film by American poet Ron Padgett. 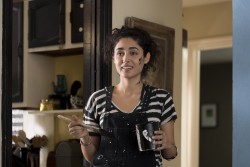 Paterson’s wife Laura (Golshifteh Farahani) is joyfully obsessed with various projects: baking cupcakes, learning guitar (with the goal of being a country music star) and black and white colours. She wears various black and white patterns, does black and white interior decor in their house and of course, ices her cupcakes in black and white. The couple’s willful English bulldog Marvin is another component of Paterson’s daily routine. Each night after dinner the two walk to the neighbourhood bar where Paterson  has a social drink or two while Marvin waits outside.

Jarmusch is fond of doubles, like Paterson the man and Paterson the city; twins are noticeable as bus passengers or in passing; Paterson tells Laura about Petrarch who wrote sonnets to another Laura. Jarmusch uses poets and Paterson personalities as signposts: Williams’ epic Paterson; references to Allen Ginsberg, Dante Alighieri, the boxer Hurricane Carter, Sam Moore, the original Sam of soulsters Sam and Dave, comedian Lou Costello, founding father Alexander Hamilton, even a deadpan reference (by Moonrise Kingdom’s Jared Gilman and Kara Hayward as aspiring anarchists) to the Paterson immigrant who returned to Italy in 1898 to assassinate King Umberto I.

Paterson has a chance encounter with Method Man (a.k.a. Cliff Smith) rapping in a laundromat about the 19th-century black poet Paul Laurence Dunbar. He stumbles on a young girl (Sterling Jerins) who reads him a poem, Water Fall, she has written under the influence of Emily Dickinson. Later, Paterson's writing, briefly and accidentally curtailed, is revived by a conversation with a Japanese tourist (Masatoshi Nagase). Nagase, who was fixated on Elvis in Jarmusch's 1989 Mystery Train, plays a writer caught up in Williams’ Paterson, which he carries in a Japanese translation.

A poetic film with touches of Zen.