In the enchanting fable Kumiko The Treasure Hunter, an alienated 29-year-old Japanese Office Lady (a kind of corporate executive assistant) becomes obsessed with finding an attaché case filled with money that she believes is buried near Fargo, North Dakota. Her information has come from a VHS tape of the Coen brothers’ film Fargo which she believes is based on real events. (She found the tape while treasure hunting in a cave near the ocean.) On her company’s credit card she flies to Minneapolis in the middle of winter to pursue her dream. Ignoring the sage advice of helpful strangers she meets along the way, she eventually finds herself face to face with her Fargo reverie.

The sensitive ambient soundtrack by The Octopus Project is a prime example of a film and its score moving in lockstep. Never does the music intrude on the action. In fact its judicious use, from its gentle beginnings as Kumiko finds the VHS, is always part of the film’s fabric. The most graphic moment is the subtle electronically altered version of steel guitarist Pete Drake’s version of  Johnny Mercer’s Dream (“Dream when you’re feeling blue”) as she lands in “The New World.”

From the calliope-like music that follows her into a drugstore to the unsettling pure tones as day breaks through the window of her motel room, from the heavenly chorale that briefly underlines her foot being measured for new shoes and the high-pitched ghostly sounds that accompany her into the woods lit only by her flashlight to the slow-motion music box-like sounds of the climactic day, The Octopus Project’s support of the narrative is unwavering. 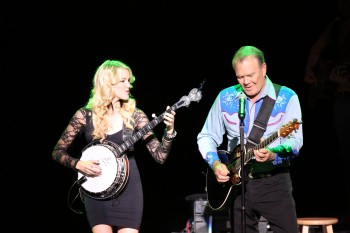 Anyone who has had the good fortune to see The Wrecking Crew, the absorbing documentary about the eponymous group of 60s and 70s L.A. session musicians, would have noticed the guitarist Glen Campbell during the recording of the Beach Boys Pet Sounds. Campbell went on to have a major career as a country music pied piper for the masses with hit records (many of which are thanks to composer Jimmy Webb) and a popular TV show. Glen Campbell: I’ll Be Me documents his last musical hurrah after he was diagnosed with Alzheimer’s in 2011 at 75.

Part tutorial on a particularly cruel disease and part celebration of a great musical talent, the film follows Campbell and his fourth wife from the Mayo Clinic to the tour bus and the concert stage as the singer and his band (including their three children) play 151 dates ending on November 30, 2012. Filled out with minutes of touching home movies and video, candid revelations of the indignities of Alzheimer’s and copious examples of the depth of Campbell’s musical reservoir (which allowed him to stave off some aspects of the disease), I’ll Be Me is a touching film that unashamedly shows its subject’s vulnerability and joy of life unashamedly.

Among the movie’s many unexpected treasures: Campbell singing Hank Williams’ Lovesick Blues on the bus with his banjo-playing daughter Ashley; outpicking Willie Nelson on his TV show; and recording his last song with Hal Blaine and other survivors of The Wrecking Crew. 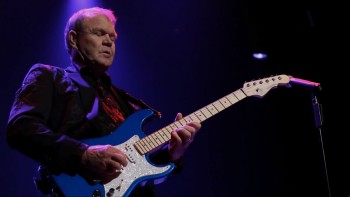 Bruce Springsteen, one of the doc’s many talking heads, eloquently described Campbell’s singing as well as anyone: “beautiful voice, pure tone, with a world of emotion underneath.”

In I’ll Be Me, the emotion is no longer underneath. See it at the Bloor Hot Docs Cinema from April 3 to 9. Kumiko The Treasure Hunter can be seen at TIFF Bell Lightbox beginning April 3.