Two historical dramas, both inspired by true events, are appearing in Toronto theatres beginning August 16 and 23.  Lee Daniels’ The Butler (which opens first) follows the Civil Rights movement from the late 1950s tand the turbulent 60s right up to Obama’s election, all through the vantage point of a black White House butler, Cecil Gaines. Gaines’ character is based on Eugene Allen who served eight Presidents from Truman through Reagan (although the film has him beginning his service in 1957 to coincide with the first blast of the federal government’s interventionist role in Little Rock, Arkansas against the segregationist Governor Orville Faubus). 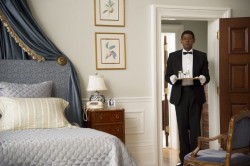 These history lessons never get old, from lunch counter sit-ins to the Bloody Sunday of the Selma march, the Freedom Bus incident with the Ku Klux Klan through the assassination of Martin Luther King and the rise of the Black Panthers, even as they are all too often subsumed by melodrama. That the film’s narrative is never completely thrown off its dynamic trajectory is chiefly due to Forest Whitaker’s nuanced, dignified performance in the title role (Oprah Winfrey is awards season bait as his wife). And to be sure, having one of his sons (played by David Oyelowo) become a participant in the struggles of the 1960s adds a special perspective to balance the cloak of invisibility that Gaines must wear in order to do his job. 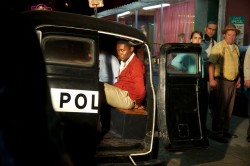 The period soundtrack is at its best when it turns to R & B hits like Faye Adams singing “Hurts Me To My Heart” (1954) or Shorty Long doing “Function At The Junction.” Dinah Washington’s take on “I’ll Close My Eyes” (1956) enlivens the transition between Kennedy and Johnson; Gladys Knight brings great depth to Lenny Kravitz’s “You and I Ain’t Nothin’ No More.”

But the classical excerpts, like Gerald Robbins and the Moscow Philharmonic with Kenneth Klein conducting Schumann’s Concerto for Piano and Orchestra in A Minor are too nondescript to make a significant impact, beautiful as the music may be intrinsically. Mozart’s C Major Sonata, K. 545 and his Rondo No 2 for Violin and Orchestra, K. 373 are a solid upgrade on run-of-the-mill movie music but act only as a way to class up the production. Bach’s Praeludium from his Partita No. 1 stands out (undoubtedly because the pianist is Maria Joäo Pires), as does Walter Klien’s all-too-brief moment with Mozart’s Piano Variations on ‘Ah, Vous Dirai-Je, Maman.’ 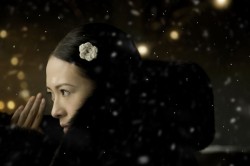 The Grandmaster conflates Wong Kar Wai’s best known film, the über romantic In the Mood for Love with his earlier martial arts homage to Sergio Leone, Ashes of Time. Warm strings and marching drums set up a kung fu match in the rain in Foshan 1936, a brassy orchestral combat between Gong Yutian the grandmaster of northern China and Ip Man (Wong favourite Tony Leung Chui Wai), from a well-to-do southern family. A piano solo introduces us to the Gold Pavilion brothel (which was a social club for martial artists) and to Gong’s daughter, Gong Er (Zhang Ziyi). Lots of facial close-ups serve the iconographic landscape well. Operatic music in the vein of Lakmé follows the breaking of the cake dance, a marvellously well-choreographed battle of wits between Gong and Ip, which Gong wins.

The Japanese invasion is conveyed through the shattering of a Gong family portrait, like going straight to winter from spring. Meanwhile, Ip likewise refuses to collaborate and loses two daughters, moves to Hong Kong in 1950 to support what was left of his family bringing his Wing Chun style of kung fu A-game. (The film is filled with ritual and customs like Ip Man’s stylized acceptance of a cigarette from the “Tai Chi Master.”) The orchestral introduction to “Casta Diva” for a crucial knife fight shows the different use of classical music in the two films. Here it enhances, in The Butler it just fills space. We never hear the voice in the Bellini; Wong Kar Wai knows how to build and savour the romantic moment. 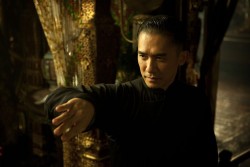 Hyper romantic diffused images and the warmth of a cello set the scene for Ip’s second meeting with Gong Er, in Hong Kong where she is a doctor, having renounced martial arts but paying physically for her old injuries as a martial artist.

“How boring life would be without regrets,” she says. feeding Wong’s remorseful bent, as the soundtrack resonates with the action on the screen; in The Butler the use of classical music feels slapped on.

Wong uses excerpts from several Chinese operas, Deborah’s theme by Ennio Morricone from Once Upon a Time in America, Stafano Lentini’s Stabat Mater for soprano and orchestra and original music by Nathaniel Méchaly and Shigeru Umebayashi to enhance the rich imagery of his film. Meanwhile, the spirit of Wing Chun kept Ip Man going through the 1950s; his most famous pupil was Bruce Lee (an electrifying few seconds of a young boy smiling knowingly precisely capture his precocious talent).