Welcome to Hot Docs, where content is the star, the story is the glitter and the grit is the glamour. There was no shortage of music-centric docs at the festival’s recently concluded 20th anniversary edition. From the audience award-winner Muscle Shoals to Pussy Riot – A Punk Prayer’s courageous young Russian women, from As Time Goes By featuring the world’s oldest jazz combo to the Live Cinema: Image/Sound Mixing performance by Peter Mettler and Biosphere, there were at least 15 films exploring a multitude of musical worlds. Here are ten: 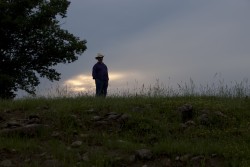 Take a cracking good yarn about a recording phenomenon that reveals as much about well-known (and enormously talented) musicians as it does of the music they make and you have Greg “Freddy” Camalier’s Muscle Shoals, voted Number One by this year’s Hot Docs audiences. It’s a film with many strong components beginning with the northern Alabama terroir where it’s situated, on the banks of the Tennessee River, which sang, according to native folklore. Its central character, Rick Hall, is the key to it all, a musician with childhood scars who started the FAME recording studio in his late 20s, staffed it with a groove-making back-up band, the Swampers, and committed some of the biggest names in soul music to vinyl. From Percy Sledge (“When a Man Loves a Woman”) who had gone from singing in the nearby cotton fields to serenading patients at the local hospital where he worked as an orderly to Aretha Franklin and Etta James. He was making integrated music in the era of the segregationist governor George Wallace. Keith Richards’ priceless recollections of and actual footage of the recording of “Wild Horses” is one of many highlights, but none more potent, in a narrative sense, than the Swampers leaving Hall to start a rival studio.

Anyone who has ever heard the Kronos Quartet’s version of Perfidia in which they accompany a Mexican leaf-blower in one of the most romantic pieces of music ever recorded would be fascinated by Mladen Kovacevic’s Unplugged. This sometimes tongue-in-cheek look at how three Serbians relate to this most primitive of instruments follows two superb practitioners of the art – Vera, an ex-private detective who began refining her technique at the age of five, and Pera, a joyous farmer whose exuberant music making’s only restraint is the miserable state of leaves in the Vlach countryside. Meanwhile, Josip, an amateur inventor and self-taught performer on two dozen mostly unique wind instruments endeavours to add leaf blowing to his resume. 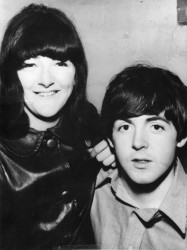 Ryan White’s Good Ol’ Freda is a charming footnote to the Beatles history, telling the formerly untold story of the young Liverpudlian, Freda Kelly, who was hired by Brian Epstein as a secretary and ended up managing the Beatles fan club, answering mail and obtaining autographs with an admirable dedication. She was just 17 when she began her 11-year employment and she dispenses some surprising nuggets as the film progresses, mostly to do with her special relationships with the lads’ parents, especially Richie’s (Ringo’s) mum. “Paul was agreeable, John could be grumpy,” she recalls. “Mr. and Mrs. Harrison loved the fame; Harry Harrison taught her to dance.” In the early days she seemed to have a crush on Paul one week and on John the next, and as the years went by her loyalty and integrity never wavered. The joy of the Beatles from 1961 buoys the film and the soundtrack brings it all back through the use of 19 originals that the band would later cover (Little Richard’s “Long Tall Sally” and the Cookies’ “Chains,” for example) and four bursts of energy by the fabulous foursome themselves used to great effect: “I Will,” “I Saw Her Standing There,” “Love Me Do” and “I Feel Fine.” 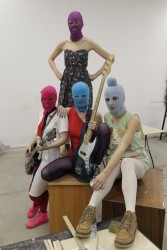 Pussy Riot – A Punk Prayer, which examines three young Russian women on trial for performing a politically charged punk song in Moscow’s St. Christ Cathedral, is an apt example of the Brecht quote that opens the film: “Art is not a mirror but a hammer with which to shape it.” Directors Maxim Pozdorovkin and Max Lerner skilfully weave footage of musical protest street theatre with intimate portraits of the principals in their own words and those of two fathers and a mother to convey the fervor with which they pursued their goal  “as artists to change humanity, to be the voice of the voiceless, to change the system.” This chronicle of their bravery lingers long after the movie ends. 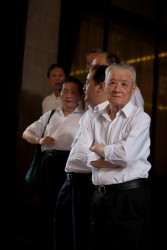 As Time Goes By In Shanghai, Uli Gaulke’s loving look at the Peace Hotel Old Jazz Band, so-called because it’s been performing daily in the bar of Shanghai’s art deco wonder since Christmas Day, 1980 -- and whose members range in age from mid-60s to upper 80s – is no “Sentimental Journey.” Rather it’s a tribute to six musicians as they prepare to make an appearance at the North Sea Jazz festival in Rotterdam. Their style evolved from listening to old records and their playing carries the charm of another age. Their stories, too. Memories of the ballrooms of old Shanghai dovetail with the Cultural Revolution crackdown on the arts but it’s the flirtatiousness of Mr. Bao, the drummer with the band’s young female singer and the humour of Mr. Sun, the saxophonist that captivate. When Sun is hospitalized in Rotterdam, he sings the funeral march from Beethoven’s “Eroica” symphony. And when the bassist, Mr. Li, describes how he fell for the bass because of the indescribable deep passion he heard in the beginning of Schubert’s “Unfinished” symphony, you realize yet again that music is a universal language. 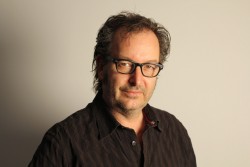 Toronto-based Peter Mettler, the subject of a retrospective at this year’s Hot Docs, used the extensive technical facilities of the Royal theatre to present Live Cinema, in which the filmmaker worked with a pre-existing music track by Geir Jenssen (who performs under the name Biosphere) and a four-channel mixing board (made by DERIVATIVE) with many options for inserting and blending film and audio clips into images that appear onscreen. Mettler, who has an extensive interest in music (and plays electronic chamber music), acknowledged after the show that a lot of his films are structured like music. He’s been doing these improvisations since completing Gambling, Gods and LSD about ten years ago. It’s as if he’s inviting the audience to “relax and float downstream” in the manner of the Beatles’ “Tomorrow Never Knows.” Over a strong ambient pulse, the images begin out of a foggy northern lake. For the next 45 minutes this refreshing visual-aural tour touched on outer space, the familiar lava flow from The End of Time and moments from other Mettler magic from paramecia to the double helix. The music was squarely at the service of the images as the images poured out in a random puddle of connectivity. 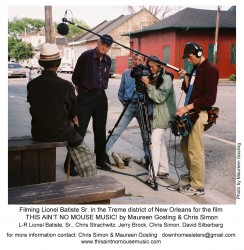 Forced to abandon his familial Silesian estate as Soviet troops marched westward at the close of WWII, by 1947 the teenaged Chris Strachwitz had made his way to America where his passion for records and roots music eventually led him to found the Arhoolie label and become one of the giants of the niche recording industry. Strachwitz was guided by an unerring sense of what he liked; at first it was New Orleans traditional jazz. His love affair with making records began with a trip with folklorist Mark McCormick to “a Houston joint I’ll never forget.” Lightnin’ Hopkins was “hurting, making up stuff, making up poetry on the spot in the beer joint.” Hopkins’ moving “Tom Moore Blues” spurred the two to discover the farm in Navasota, Texas that was the impetus for the song. That’s where they found Mance Lipscomb. 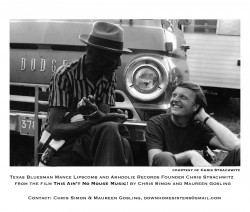 As McCormick remembered it: “This man had the whole history of rural black families in his head.” Strachwitz made Lipscomb the first of countless artists who would carry the Arhoolie (which means “field holler”) banner for 50 years. Bluesmen Fred McDowell, Big Joe Williams, Big Mama Thornton, Buddy Guy, Robert Pete Williams and Hopkins, Cajun superstar Clifton Chenier, Tex-Mex guru Flaco Jimenez as well as lesser known musicians from Texas, southwest Louisiana and even Appalachia are all testament to a man who “didn’t want to record things I don’t like.” And it helped his company immeasurably that he was the publisher of Country Joe and the Fish’s anti-Vietnam anthem “I Feel Like I’m Fixin’ To Die Rag.” Especially after its exposure at Woodstock. There’s nothing inauthentic about Chris Simon and Maureen Gosling’s portrait of  “a classic record man” as Ry Cooder calls him and nothing inauthentic about the music depicted in This Ain’t No Mouse Music -- a clear-eyed documentary that took eight years to make. 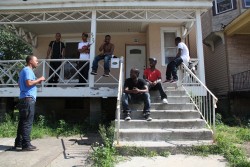 Reuben Atlas’ The Brothers Hypnotic follows eight of Phil Cohran’s 23 offspring as they forge a career for the Hypnotic Brass Ensemble through fierce independence and musical smarts, moving from street performances to playing with Prince and  Mos Def. But the film is also a tribute to the musical training their father gave them: “Long tones were the first things we ever learned. It’s the essence. One note. It’s meditation and it connects you to the universe. And because anything that’s worth anything lasts long.” The elder Cohran played trumpet with Sun Ra among others, but was at least as well known for his work with Chicago’s African-American community and his Afro arts centre. Just as important as their musical education was the self love and sense of identity he taught them, which enabled them to inspire and bring joy and happiness to people. You can enjoy them  live July 27 in a free concert at Harbourfront Centre. 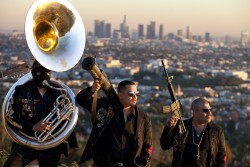 When you’re lost in Juarez these days, you’re in the murder capital of the world (3622 in 2010, for example – El Paso, Texas across the Rio Grande had five that year). Shaul Schwarz’s Narco Cultura is a cinéma vérité look at the Mexican drug cartels’ pop culture influence on a narco corrido singer, Edgar Quintero, with stars in his eyes and bullets in his belt, set against a crime scene investigator who must mask his identity to protect his life in Juarez. The singer makes the brutal life of a cartel member glamorous; fans on both sides of the border eat this stuff up. One journalist puts it in perspective: “Narcos represent limitless power but they are a symptom of a dead society; 92 per cent of murders have not been investigated.” Quintero takes a trip to Culiacán, in the heart of the northwestern state of Sinaloa. Schwarz follows him into a beautiful cemetery with big tombs filled with young dead men.

AJ Schnack and David Wilson’s We Always Lie To Strangers lifts the veneer off the showbiz mecca that is Branson, Missouri, a town of 10,000 in the Ozark mountains that is the Las Vegas of middle-American musical entertainment. It’s also a bastion of conservatism and heavily Republican. Exuberant as its performers are they would be hard-pressed to find an audience here in Toronto. Well, there’s just no accounting for taste. And in the middle of the place where the Osmonds, the late Andy Williams and Larry Welk (Lawrence’s son) all filled theatres for years, are the Lennon family, staunch Democrats, blessedly flag-waving and genuinely family-oriented, lured to Branson by Welk (the Lennon Sisters were a staple of the 1960s’ Lawrence Welk Show). The filmmakers’ skill enables us to see the struggles, artistic, economic and political of a world we would never want to imagine while making its participants human nonetheless.