Audiences returned to Roy Thomson Hall on November 10 for the first time since March 2020, welcoming the Toronto Symphony Orchestra and their new music director, Gustavo Gimeno, for a musical triptych—three programs spread over seven evenings. It was Gimeno’s initial foray into repertoire selection for the TSO, his first venture into curation—which became a means for conductor and audiences alike to get reacquainted with their orchestra.

Unusually, the opening trio of concerts began with a stage empty of musicians. Half of the orchestra members entered single file from a door on the left, the other half from a door on the right. For a brief moment they stood in place beside their chairs before noisily applauding in anticipation of Gimeno’s entrance. The audience, as if on cue, then stood and applauded in an emotional welcome which grew as the conductor made his way through the first violin section to the podium—a veritable lovefest.

The opening program was designed for the occasion. It started with Anthony Barfield’s Invictus for brass ensemble, completed in the summer of 2020 as Black Lives Matter protests intersected with COVID-19, a Lincoln Center commission that represented, in part, the resilience of the arts and the Black community. Hearing it in Roy Thomson Hall in its Canadian premiere felt like a rallying cry: “Unconquered.”

Haydn’s Overture to L’isola disabitata (The Desert Island) followed, an exciting example from the composer’s Sturm and Drang period that balanced sedate dance tunes with rousing string playing, the strings at times feeling like they were one instrument. Hindemith’s Concert Music for Strings and Brass continued the evening’s sense of ceremony, with highly polished brass and joyous strings while splashes of jazz paved the road to a welcome conclusion.

“I wonder if I am dreaming, or am I really here.” Gimeno took a moment to speak about the joy and the drama—“so many lights and shadows”—in his first night as music director, as he reflected on the importance of the arts and music before leading the orchestra in an elegant, smooth and well-rounded performance of Schubert’s tuneful Symphony No.5. Flute and oboe musings helped guide the first movement, while the second featured a lovely theme in the violins that spread delicately throughout; a slow Viennese dance floated into the next movement with an assertive beginning that played up the orchestral colour. A lively and well-balanced finale featured yet another dance tune, leaving us wanting to hear more of Gimeno’s TSO.

Unlike Benjamin Britten’s The Young Person’s Guide to the Orchestra, where a theme travels through each section of the orchestra in turn, Gimeno’s choice of an orchestral guided tour focused in-depth on the sections: strings (November 17 and 18) and the winds, brass and percussion (November 19 and 20).

The String Showcase got underway with Caroline Shaw’s Boris Kerner, a duet between cello (TSO principal Joseph Johnson) and two flower pots (TSO principal percussionist Charles Settle), with Johnson in fairly typical 17th-century continuo style, according to Shaw, before getting stuck in a repeated pattern. The flower pots enter “as an otherworldly counterpoint to this oddly familiar character” driven by Settle’s virtuosic stick work and the clash of two disparate centuries (the 17th and 21st). The strings and Gimeno—facing the back of the hall—remained onstage and completely in the dark throughout, until Johnson rejoined the cello section, Settle left the stage and the lights came up, as the strings drifted into Dinuk Wijeratne’s A Letter from the After-life from Two Pop Songs on Antique Poems. Included are two quotes from Schubert’s Death and the Maiden string quartet. “Ironically, they struck me as being Pop-like and so I allowed them to emerge as though improvised; then to be improvised upon,” Wijeratne writes. It was an immediate reference back to the opening concert and Schubert’s fifth symphony. 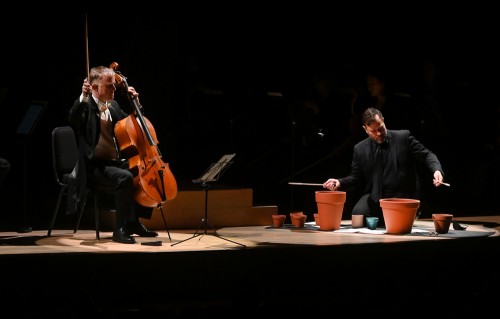 According to the composer, Kelly-Marie Murphy’s Rains of Ash and Embers with its shades of Mahler—the addition of two harpists made that point more emphatic—“combines beauty and devastation; one that acknowledges our fragile relationship with an ever-changing ecology.” It’s quite a workout, anguish and all; the TSO was up to the challenge.

Following the three contemporary works, the concert concluded with two of the most beautiful pieces in the Romantic canon: Mahler’s Adagietto from his Symphony No.5 and the 1943 string orchestra version of Schoenberg’s sultry Verklärte Nacht (Transfigured Night). The Mahler was beautifully paced, like breathing. Pure heaven. The audience was so entranced they allowed Gimeno to hold the final silence until he put down his baton.

It was a tribute to the skills of conductor and strings that Verklärte Nacht, this apotheosis of Romanticism written originally by Schoenberg as a string sextet in 1899, did not seem overweight in its orchestral version. The piece is based on a poem structured as a conversation between two lovers: the woman discloses that she is pregnant with a former lover’s child; her new lover assures her that their love will prevail and they will love the child as their own. Gimeno’s spirited baton floated in support of the many mood changes. Acknowledging the applause, the conductor chose to stand behind the podium in the midst of his orchestra.

Opening the Winds, Brass and Percussion Spotlight, and taking Aaron Copland’s Fanfare for the Common Man as its template, Joan Tower’s Fanfare for the Uncommon Woman No.1 is dedicated to the conductor Marin Alsop—the first of five short fanfares “dedicated to women who take risks and who are adventurous.” The piece harkens back to Barfield’s Invictus and the opening salvo of the first concert program, with brass streams buttressed by the exciting addition of percussion.

Dvořák’s bucolic Serenade in D Minor Op.44 focused so much attention on the oboe that it felt like an oboe concerto supported by the French horn, and featuring sublime playing by principal oboe Sarah Jeffrey and principal horn Neil Deland. As the jolly finale wound down, a mysterious high-pitched sound could be heard rising through Roy Thomson Hall. As the players departed, it was evident that it was Gimeno striking the clave to begin Steve Reich’s mesmerizing Music for Pieces of Wood, a quintessential minimalist composition for five percussionists in which a rhythmic pattern slowly moved from player to player. Gimeno seemed utterly relaxed – almost Zen-like – while he was continuously playing, his prowess a reminder that he had been principal percussionist of the Royal Concertgebouw Orchestra from 2002 to 2012. 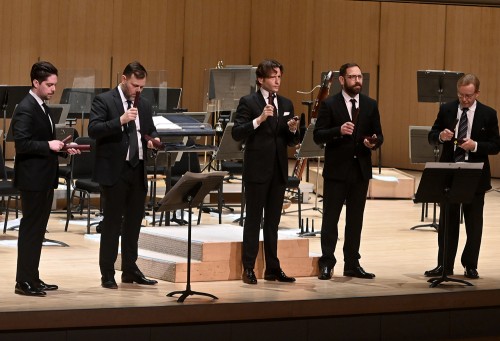 Stravinsky’s Symphonies of Wind Instruments (1947 version) with its folk tunes and angularity, its distinct colours and echoes of Petrushka and The Firebird, and its rhythmic niceties and striking modality, proved (along with the Reich) to be the evening’s highlight—the 20 musicians all on the same wavelength throughout.

Tying it all together was Oscar Morawetz’s Symphony for Winds and Percussion, which felt like the offspring of Dvořák and Stravinsky, with a touch of jazz and some anthemic passages leading to a big, brassy climax.

Joel Ivany's mini-portrait of the conductor, Gustavo Gimeno – In Real Time, appeared on the TSO website just before the opening concerts. In it, Gimeno admitted he was afraid of not taking risks because when you do dare to take risks, “if you are lucky, there are moments being on stage in the middle of a piece of music where you enter a different world, even for only a few seconds. The combination of the energy of the music [and] of the people, brings us all together to a place where we couldn’t get to on our own. You cannot plan when that’s going to happen, so that makes it very special. It is something I search for all the time. When I look ahead, the future of the TSO is to be curious, eclectic and daring. My goal is to inspire as many people as possible to feel proud of this orchestra… As much as possible I hope to create a feeling of unity and oneness. That would be a wonderful thing.”