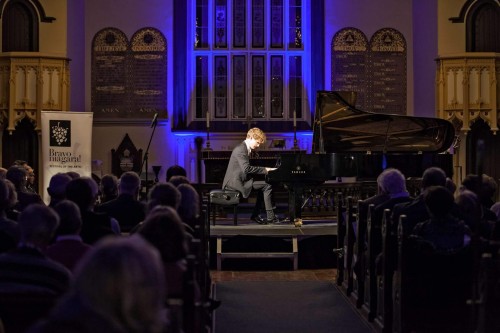 It’s been more than two years since Jan Lisiecki’s last solo piano recital in Toronto. Not wanting to wait another year for his Koerner Hall concert next March, I took advantage of Bravo Niagara!’s serendipitous scheduling to hear this exceptional pianist perform March 10 in the historic St. Mark’s Anglican Church in Niagara-on-the-Lake. The critically acclaimed 22-year-old Calgary-born Polish-Canadian is now an established professional, with four Deutsche Grammophon recordings, and his extensive touring has made him a member of the one million mile club. The Bravo Niagara! recital was bracketed by appearances with the OSM in Montreal on March 6 and 8 and a solo date in São Paulo, Brazil on March 13.

Lisiecki has always been comfortable speaking to his audience, charming and at ease, with a maturity beyond his years. After opening his recital with Chopin’s two Op.55 Nocturnes, he took to the microphone to introduce the “night’s music theme” that tied together the evening’s repertoire. He spoke of Schumann being awoken in the middle of the night by a brass chorale, an event he soon learned had coincided with his brother’s death and which later inspired the writing of Nachtstücke (Night Pieces) Op.23, the next work on the program. The opening movement felt like a march in the dark; the second, more harmonically complex, had the sense of looking back. After the turmoil of the third movement, Lisiecki brought the piece to a satisfying place of resolution and repose.

Lisiecki introduced Ravel’s demonic Gaspard de la Nuit by demonstrating at the piano how the repetition of one note and the harmonies Ravel wrote around it create a chilling picture. In Ondine, the first movement, Lisiecki’s unerring phrasing was coupled with a technical prowess that served the music. Le Gibet was well-paced, icily haunting, its inexorability evoking the spectre of death. Scarbo, the third and final movement, was (Lisiecki told us) the result of Ravel’s intention to write the hardest piece ever written. Lisiecki’s dazzling performance of it brought the generous helping of music before intermission to an exhilarating conclusion.

Rachmaninoff’s Morceaux de fantaisie Op.3 is a youthful composition that nonetheless typifies the Russian keyboard virtuoso’s later works in its tone colours, textures and harmonies. The Elégie harkens back to Chopin, and the famous Prélude with its searing lyricism is one of the composer’s most popular pieces. Lisiecki showed great dynamic range in both and showcased the contrasts in the Mélodie with elan, while bringing out the sinister charm of Polichinelle.

Lisiecki had command of the keyboard throughout the recital, beginning with the pointed rhythm and accelerated rubato of Chopin’s Nocturne Op.55, No.1 and strong voicing of the night music element of Op.55 No.2. The Nocturne Op.72, No.1 was overshadowed by the marvellous fusion of art and technique in Chopin’s Scherzo No.1, which the pianist brought off with matchless impetuosity. He brought a welcome serenity to its lovely midsection before the tumultuous finish produced the evening’s second spontaneous standing ovation from the capacity crowd. 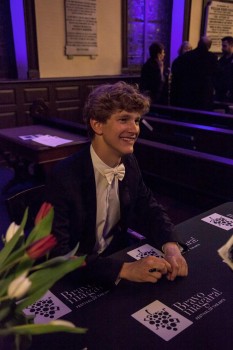 Träumerei, the matchless Reverie from Schumann’s Scenes from Childhood, brought the concert to a sublime musical and apt thematic end, a tranquil balance to the force of the Scherzo and a reminder of Lisiecki’s ability to make every note count while working with the quirks of the Yamaha grand piano he was playing.