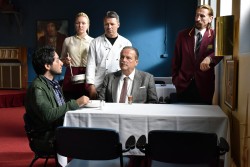 Twin stories of a Syrian refugee and a Finnish restaurateur dovetail nicely in The Other Side of Hope, the second film in a “ports trilogy” by director Aki Kaurismäki. Kaurismäki’s profound humanism dominates the screen as his poetic, intense portrait of a tragic life comes face to face with the director’s trademark comic deadpan style. The result is a sweet and droll story driven by optimism and fuelled by the generosity and concerns of its characters.

A little squeezebox music sets the dockside scene, as a man slowly emerges from a shipboard slag pile just before dawn. Meanwhile, a second man wordlessly leaves his wife, dropping his house keys and wedding band on the small table where she sits drinking, before driving off in his big black car accompanied by the sound of a Finnish blues song on a box guitar. As he passes the stowaway on the street, we see the source of the music: a street busker played by Tuomari Nurmio, often called the quintessential Finnish musician for his ability to perform a variety of genres.

The stowaway, Khaled (Sherwan Haji), cleans up in a hostel before reporting to police to officially seek asylum. The husband, Wikstrom (Sakari Kuosmanen), sells his entire carload of shirts and gives up his travelling salesman life to pursue his dream of opening a restaurant. He uses the proceeds of the shirt sale as a stake in a stud poker game and, with Kaurismäki’s deadpan style put to good use, wins a small fortune, enough to lease a restaurant well past its prime and the assortment of staff that comes with it.

Khaled, who has made the long and hazardous trek from Aleppo to Helsinki despite being separated from his sister, befriends an Iraqi refugee who helps him adjust to the local red tape. One night, he winds up sleeping in a dumpster behind Wikstrom’s restaurant. Wikstrom hires him on the spot, arranges for an identity card and the story evolves from there, with the aid of Kaurismäki’s amazing actors, like the marvellous Kati Outinen, from his older films.

The musical component is an intrinsic part of the whole. Virtually all the music we see and hear is within the action of the movie. From street performers like the left-handed guitar-playing, harmonica-blowing Ismo Haavisto (performing his song Midnight Man) to the sad old dancehall tune by Henry Theel; from the left-handed guitar players Harri Marstio and Marko Haavisto to Nurmio’s Skulaa Tai Delaa, the blues that subtly caresses the crowd in a club that includes Khaled and his friend; to the music of Toshitake Shinohara, who also contributed to the score of Kaurismäki’s 1992 film La Vie de Bohème; to a touching scene with his Iraqi friend, in which Khaled (Haji) plays the oud.

The world of The Other Side of Hope has a timeless feel; it seems to swing between the past and the future with its richly expressive cinematography and matter-of-fact dialogue. At its core is the tender humanism of Jean Renoir.

The Other Side of Hope plays until Thursday, December 14 at TIFF Bell Lightbox.