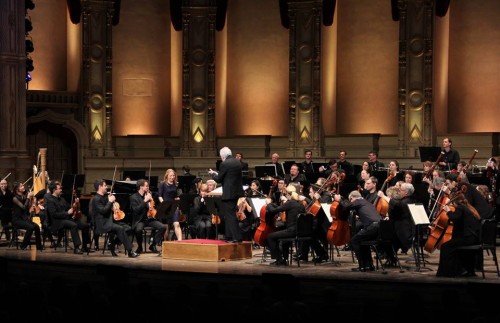 Of the 30 or more concerts that took place in Vancouver during ISCM 2017, the annual festival presented by the International Society for Contemporary Music, only a few involved orchestras. Naturally, due to the greater costs of larger musical forces, the majority of concerts in the festival were for smaller ensembles. It was, nonetheless, impressive that the organizers of ISCM 2017 Vancouver were able to include several orchestras: the Vancouver Symphony Orchestra, the National Arts Centre Orchestra, and the Victoria Symphony. And then there was the Vertical Orchestra, definitely not your conventional classical orchestra – but more about that in a moment.

On November 5, day four of the week-long ISCM festival, the Vancouver Symphony Orchestra (VSO) and music director Bramwell Tovey presented a concert of Canadian and international works at Vancouver's Orpheum Theatre. VSO composer-in-residence Jocelyn Morlock introduced the evening, which began with the premiere of a re-write of her own 2015 composition, That Tingling Sensation. She said that her work was inspired by “that fascinating human experience of being physically thrilled by music.”

“I think that this is why people love music – that visceral reaction to beauty, to energy, to lovely or powerful sound,” she explained. “I've named my piece out of love for this ideal, and for the kaleidoscope and electrifying palette of sounds the orchestra can create.” Whatever prompted the re-write of the piece, Morlock seemed to get everything right: her ten-minute composition scintillated with energy and orchestral colour.

Every ISCM concert contains works that are chosen in advance by an international jury. At the VSO concert, this was the case with UK composer Charlotte Bray's brilliant composition, At the Speed of Stillness. Bray explained that the imagery that prompted the music was a poem by the surrealist poet Dora Maar. “The energy, sense of endless movement, and exhaustion encapsulated in the poem permeates the music,” she wrote in the program notes. “Important also is the play of paradoxical ideas: the contrary notion that something moving quicker than the human eye detects can appear to be motionless.” Bray read Maar's poem, and then Tovey and the orchestra immediately dazzled the audience with her powerful musical depiction, revelling in colourful and inventive orchestration and an unstoppable pulsing drive.

German composer Friedrich Heinrich Kern's Indigo was another jury-selected composition at the VSO concert. The work had been commissioned by the German chemical company, BASF, to celebrate the restoration of a concert hall in Ludwigshafen, Kern's hometown. Kern said he intended the work to exploit the acoustics of the hall. However, Kern shared another impetus for the work – namely the connection of BASF to the creation of synthetic indigo dye in the late 19th century. In fact, the celebratory nature of the work was uplifting in a broadly stated sense, and yet another take on colourful orchestration.

A highlight of the evening was the collaborative composition Pressed for Time, a sitar concerto jointly composed by the soloist, Mohamed Assani, from Pakistan and Vancouver composer John Oliver. Oliver and Assani managed to create an attractive, effective work that was very well received – a true meeting of Hindustani classical music and Western orchestral composition, and a wonderful example of community-building.

Later in the festival on November 7, an orchestra of a very different nature performed at the Atrium of the Vancouver Downtown Public Library: the Redshift Vertical Orchestra, named after the way that Redshift organizes ensembles to play spread out throughout the seven levels of the library space. The November 7 show, titled “21st-Century Guitars,” involved seven world premieres for guitar ensemble, performed by what composer and organizer Jordan Nobles described to me as “18 of the most innovative and respected guitarists working in Canada today.”

According to Nobles, “the Vertical Orchestra brings music into the public sphere with works addressing important themes and ensemble configurations tailored to unique architectural spaces.” Nobles told me this was the seventh time that he and his Redshift organization had staged such site-specific events.

As the audience entered the enormous atrium, the 18 electric guitarists were already positioned high up in alcoves lining the outer wall of the library atrium, tuning up their gear. The air was filled with random frequencies, exactly as one might hear in a conventional hall where a classical orchestra is preparing to play. But in this case, the sounds of 18 electric guitarists were sending signals that bounced around the reflective surfaces of the space, producing a sort of audio halo that was at once chaotic and mesmerising.

At the appointed time, all fell silent, and we were welcomed to the performance by Nobles, whose piece would be the first of the seven on the program. At Nobles' signal, the music began.

From composition to composition, each composer's work played with the acoustics of the space, stringing a succession of contrasting sonic adventures with pieces by Nobles, Lisa Cay Miller, Alfredo Santa Ana, Rita Ueda, James Maxwell, Benton Roark and Tim Brady – all Canadian composers. The effect of all this cascading, reflecting, enveloping sound was magical – and made the Redshift Vertical Orchestra’s performance an ISCM festival highlight.

The 2017 edition of the ISCM festival took place in Vancouver from November 2 to 8. This report is part of a series of articles on thewholenote.com on ISCM 2017 and related music in the Vancouver area this month.