In the WholeNote podcast that editor/publisher David Perlman and I did earlier this year, Jonathan Crow, the Toronto Summer Music Festival’s artistic director, called James Ehnes “the greatest violinist Canada has ever produced.” Last week, Ehnes’ four-day sojourn with the Toronto Summer Music Festival provided ample opportunity for local audiences to experience his playing for themselves – and served as a shimmering showcase for a peerless Canadian performer.

The first of Ehnes’ appearances, a chamber music masterclass that he hosted on July 16 for fellows from the TSM Academy Chamber Music Institute, began with Fire, the first movement of Kelly-Marie Murphy’s wildly intense, rollicking piano trio, Give Me Phoenix Wings to Fly. Ehnes praised the Academy musicians for their enthusiasm, musicianship and commitment to a piece of music that he was hearing for the first time. “For something written so freely, it’s very precise in how to create that freedom,” he observed. “The more you’ll play it, the more you’ll be aware of the details.”

It was his own attention to detail that marked his solo recital the next evening at Koerner Hall. Opening with Bach’s Partita No.1 in B Minor, BWV 1002 and closing with Bach’s Partita No. 2 in D Minor, BWV 1004, Ehnes’ playing featured a smooth, singing tone and exquisite, relaxed openness. He scaled the heights of the second partita’s famous Chaconne in a moving performance that touched the power and the glory of the music, from its complex passagework and mesmerizing broken chords to moments of delicate beauty. In between was an astonishing performance of Ysaÿe’s Sonata No.3 in D Minor, Op.27 “Ballade.” Ehnes brought a soulful power and seemingly effortless technique to this complex and lyrical six-minute piece built around a three-note motif.

The morning of July 19, Ehnes played the Ysaÿe for an enthusiastic audience of children, many of them budding violinists, in the first-ever TSM Festival Kids Concert. The hour-long event was a sneak preview of the Bach Celebration concerto program that evening, with Ehnes, fellow violinists Jonathan Crow and Andrew Wan, harpsichordist Christopher Bagan and the TSM Festival Orchestra playing the first movement of the three-violin concerto and Ehnes and Crow the third movement of the Concerto for Two VIolins in D Minor, BWV 1043. Mooredale Concerts Music & Truffles engaging host Joanna Kellam kept the proceedings moving without talking down to her audience as she questioned each of the soloists. Ehnes, for example, after explaining that “all violinists are sort of obsessed with Bach,” compared his solo recital to taking a free throw in basketball, and playing a concerto to passing to the ball to a teammate. After Ehnes and Crow played the Allegro from the concerto, Kellam had them play it Lento (lugubrious), Presto (spectacular, but inappropriate) and Vivo (animated and hammed up) to illustrate the difference between the tempo markings. 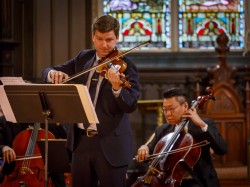 Later in the day at TSM’s special “Bach Celebration” concert at the Church of the Redeemer, Ehnes and Crow were once again well-matched, as they exhibited impressive togetherness and all-round excellence. The evening opened with Ehnes performing Bach’s Violin Concerto in A Minor, BWV 1041. His singing tone and the ease and strength of his playing again stood out in the profound loveliness of the Andante and the playful, sunny Allegro Assai. His commanding technical prowess was evident in the jubilant Allegro of the Violin Concerto in D Minor, BWV 1952R.

The concert came to a thrilling conclusion, when Ehnes joined Crow and Wan in a performance of Bach’s Concerto for Three VIolins in D Major, BWV 1064R. The concerto’s third movement proved to be another life-affirming shout of joy, leading to the coup de grace: the first movement of the Brandenburg Concerto No.3, with Ehnes, Crow and Wan taking the violin parts. It was a fitting end to Ehnes’ TSM Festival activities, and an experience that all who were there will remember for a long time.