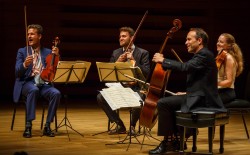 Toronto Summer Music (TSM) began its second decade with an electrifying performance at Koerner Hall by the St. Lawrence String Quartet on July 13. It was the first time in its storied history that the quartet had performed in that fine acoustic space and they made the most of it, seemingly expanding their audience to many who had never heard them at their usual venue, the Jane Mallett Theatre. The appreciative whoops that accompanied the standing ovation that followed R. Murray Schafer's String Quartet No.3 just before intermission and the fervid applause that greeted the conclusion of Beethoven's String Quartet No.14 in C-sharp Minor, Op.131 were an appropriate response to the SLSQ's passionate music-making.

First violinist Geoff Nuttall refrained from introducing the evening's opening work – Haydn's String Quartet No.25 in C Major, Op.20, No.2 – in favour of saluting Schafer (who was in the house) as the great living composer he is. Nuttall encouraged the audience to sing along while leading the SLSQ in Happy Birthday in honour of Schafer's 84th birthday, which falls on July 18. The quartet is currently in the midst of recording the set of six Op.20 Haydn quartets for a free online release later this year. Their affection and familiarity with the opening work was evident from the clarity they brought to the humorous development of the first movement (almost cartoonish at times) in the context of an otherwise serious statement made by the wisp of a main theme. The sombre Adagio of the Capriccio was built on a strong foundation and featured a striking tuneful solo by Nuttall. The Minuet had a fine lightness and a fleeting hint of modernity while the concluding fugue was enlivened by the SLSQ's superb ensemble playing.

The Schafer began with an impassioned cello solo, with cellist Christopher Costanza alone on stage. Soon he was joined by the offstage viola echo of Lesley Robertson. Nuttall appeared left rear followed by second violinist Owen Dalby on the right. The musical disconnection was finally resolved when Dalby was reunited with his fellow quartet members who had by then retaken their customary positions in readiness for the vocalisms that defined the Allegro energico second movement, sounds that wouldn't be out of place in David Lynch's Twin Peaks: The Return. The third movement, hinting of Bartók, with butterfly trills and meditative chants, ended with Nuttall’s sublime mystical solo violin exiting stage right.

Beethoven's Op.131‘s simple four-note opening phrase was soon transformed capriciously by overlapping tunes which are generously melodic. Fragments of lyricism constantly evolved, building on a series of temporal plinths as the breathtaking midpoint of the fourth movement was announced with understated ecstasy. From there the piece took a frenetic turn, before the brief warm respite of the sixth movement gave way to the finale, where, consumed by its own rhythmic force, it showcased its beauty unabashedly.

Nuttall announced the encore: “1771. Haydn Op.20, No.1. Affettuoso e sostenuto.” This glorious (and gloriously played) slow movement written during the first year of Beethoven's life brought the evening to a satisfying, and cyclic, conclusion.

The SLSQ's program harkened back to their 1992 win in the Banff International String Quartet Competition. In an inspired pairing, TSM will present the 2016 winners of the competition, the Rolston String Quartet, in their Toronto debut, on July 24 at Walter Hall. I look forward to hearing the music that brought them their victory.