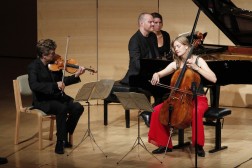 Koerner Hall was nearly full on Friday, February 26, for a concert of impeccably played 19th-century chamber music featuring the consummate musicianship of violinist Christian Tetzlaff, his sister Tanja Tetzlaff and pianist Lars Vogt. Christian Tetzlaff’s musical intelligence and the secure pianism of Vogt anchored the trio for what was very well-balanced ensemble playing. The communication between the three was palpable. (The Tetzlaff siblings have been playing together since childhood.)

It was sophisticated music making, joyously conveyed and received in kind, a rare and memorable evening.

Schumann’s Piano trio No.2 in F Major Op.80 began with a colourful dialogue initiated by Christian Tetzlaff’s solo pianissimo. An onrush of intense thematic development saw the trio playing as if they were one instrument. The slow beauty of the second movement contained moments of awestruck wonder, with the violinist devoutly maintaining a ppp dynamic without being overpowered by Vogt’s sensitive piano. As the violin became transfixed by Schumann’s notes, the piano brimmed with life. The third movement epitomized an ideal balance among the three musicians, close to perfection, before the piece came to a satisfying end with the finale’s low-key charm.

Dvořák’s Piano Trio in E Minor Op.90 “Dumky” consists of six movements, each one built around the Slavonic folk element dumka, each melody of which Dvořák transformed from melancholy to exuberance. In the first movement of the Trio, the composer’s trademark dark cello line was initially coupled with the violin to form a mournful tune. As the piece progressed, the music became richer, more textured, until a sense of abandonment took over and all three players were consumed by the dance. The second movement began with another soulful cello theme, this time supported by Vogt’s lovely piano before the invitation to the dance was taken up enthusiastically by the entire trio. In the fourth movement, filagrees of dance and rhythm co-mingled in the Koerner Hall air, grounded in the keyboard. The wonderful spontaneity of the cello pizzicati greeted a particularly sublime ending.

Youthful streams of emotion became rivers of maturity in the first movement of Brahms’ Piano Trio No.1 in B Major Op.8. The light and jovial Scherzo was a cousin of the composer’s symphonic universe as its Beethoven-like theme thickened and grew. Beginning in the piano with a slow call to a hushed pair of strings in dialogue, the Adagio’s melodic phrases were carved shards of beauty in the trio’s capable hands while the waltz-like Allegro concluded the very satisfying program. 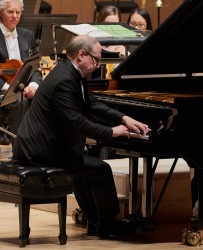 The next day in Roy Thomson Hall, the TSO, under the warm baton of guest conductor Louis Langrée in a program of 19th-century orchestral music, provided solid support for the amazing Marc-André Hamelin in a rousing rendition of Mendelssohn’s Piano Concerto No.1 in G Minor Op.25. Hamelin’s well-judged technical pyrotechnics in the outer movements of the three-movement work glittered under his sensitive touch amidst the composer’s triumphal exuberance. But the highlight was the sublime Andante second movement where Hamelin’s limpid touch and clear approach slowed time down and transported the listener to a higher plane.

The capacity crowd which overflowed into the choir loft gave the Quebec-born pianist a well-deserved standing ovation but showered Langrée and the orchestra with even more enthusiasm at the conclusion of Schumann’s Symphony No.4 D Minor Op.120. The conductor brought an incisive clarity to the density of the symphony’s first movement, coaxed hushed solos from principal cellist Joseph Johnson and concertmaster Jonathan Crow in the second and brought the audience to its feet with the finale’s optimistic climax.

Langrée conducted the Schumann, and Beethoven’s Leonore Overture No.2 Op.72 which opened the program, without a score. He made the most of the overture’s dramatic excitement, much of it reminiscent of the composer’s Symphony No.6 and to a lesser extent, No.5, which were written shortly before. Emphasizing the many silences that followed big orchestral tuttis, added to the overarching fact which I couldn’t resist: that Beethoven’s shadow loomed over both concerts just as it did over much of the entire 19th century.