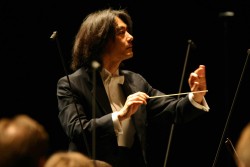 If there is a connection between these two stellar concerts in the last week of November -- the Orchestre symphonique de Montréal (OSM) and the Apollon Musagète Quartet -- perhaps it’s that the OSM’s concertmaster Andrew Wan and principal cellist Brian Manker are themselves members of a notable string quartet, the New Orford. Or perhaps it’s because the OSM’s transparency and sense of ensemble, on display in their Roy Thomson Hall concert November 25, in portions of  Stravinsky’s Capriccio for Piano and Orchestra and Shostakovich’s Symphony No.10 in E Minor, Op.93, are qualities characteristic of the best string quartets.

The OSM evening began with the Suite for Orchestra, Harpsichord and Organ, a selection of four movements taken from Bach’s Orchestral Suites Nos.2 and 3 and arranged by Mahler. In fact, at the world premiere in 1909, Mahler himself conducted the New York Philharmonic from the harpsichord; Kent Nagano chose to conduct the OSM from the podium without a baton.

After a rather quick Overture from Suite No.2, the Rondeau and Badinerie from the second suite served as a showcase for principal flutist Timothy Hutchins, who stood centre stage behind the violins as a proto-soloist. There was a delicate sense of ensemble between Hutchins and a quintet of two violins, viola, cello and double bass (over the harpsichord). The famous Air from Suite No.3 demonstrated the orchestra’s ensemble playing in another guise but it was the second movement of the Stravinsky Capriccio that revealed the transparency exposed between the solo piano and strings on the one hand and piano and woodwinds on the other. 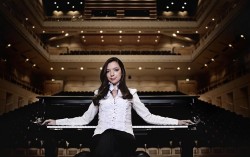 The Stravinsky was also an opportunity to hear Yulianna Avdeeva, who won the 16th Chopin Competition in 2010. She demonstrated a keen rhythmic facility and a fine sense of balance with the orchestra, as well as an empathy with the jocularity of the piece.

The first half of the concert was merely a prologue to the masterpiece that followed. The OSM made a case for Shostakovich’s Tenth as his greatest, most exciting, most profound symphony. The biting second movement with its thundering herd of strings; Hutchins’ terrific flute playing; the sharp attacks and solos by superb woodwinds and French horn. From the picaresque to the fervent, Nagano guided his musicians with a sure sense of the piece’s architecture, culminating in an exuberant conclusion that was as organic as it was powerful. The hall erupted immediately. 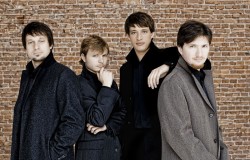 The Apollon Musagète Quartet, named after the leader of the muses in Greek mythology (and the subject of a ballet by Stravinsky), is a young Polish ensemble which has benefitted greatly from mentoring by members of the fondly remembered Alban Berg Quartet. It was apparent from the first notes of the  wonderful pianissimo that began Dvořák’s Quartet No.11 in C, Op.61 that the Apollon Musagète Quartet is special: their togetherness, balance, subtle dynamics; the fact that they listen so well to each other. They made the first two movements in particular among the most memorable of anything this season -- from their interplay as they traded phrases plying the composer’s woodsy tune in the first, to the seductive way they invited us into their sound world in the gorgeous second. The audience in the Jane Mallett Theatre, November 26, sat enraptured in a bubble of sublime silence, as welcome as it is rare.

The second half was taken up with another monumental pillar of the string quartet repertoire, Schubert’s String Quartet in G, D887, his final foray into that realm. The young players (except for the cellist) performed standing up throughout the evening. They were led by the charismatic Pawel Zoleiski in a forceful, dramatic and sensitive study in contrasts -- at one point they suddenly and convincingly went from a fortissimo to a pianissimo in four seconds -- through the typically buoyant Schubertian Scherzo to the jaunty finale. Keep your ears open as their career progresses.