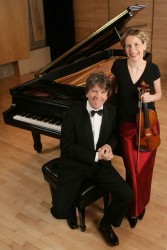 This was not just another Thursday afternoon in Toronto. The Women’s Musical Club of Toronto’s 115th season, which had begun with Paul Lewis’ remarkable traversal of Schubert’s last three piano sonatas six weeks earlier had prepared us for that. The 40-year-old Englishman, widely considered without peer as a contemporary interpreter of Schubert and Beethoven, brought out the melodic concupiscence of those massive pieces without rendering them shapeless. Indeed, the sinews of the penultimate sonata (D959) have rarely if ever been exposed with any greater clarity.

For the second “Music in the Afternoon” concert of the current season, the WMCT presented the Duo Concertante to a sold-out Walter Hall November 28. Based in St. John’s, Newfoundland, Nancy Dahn, violin, and Timothy Steeves, piano, have been performing together for 15 years, all but one of which as husband and wife. It’s a union that has produced a son and daughter as well as five CDs among countless hours of music making.  The name “Duo Concertante” denotes two solo parts and implies equality and balance, qualities that would be most evident in Beethoven’s “Kreutzer” Sonata, the concluding work of their well-founded program.

Right from the opening largo of one of Mozart’s most tuneful sonatas, K454, Dahn’s delicacy on the violin was matched by Steeves’ on the piano, as they set us up for the onrushing allegro, conveying a sense of intimacy while reminding us that this sonata was one of the first to elevate the piano to the level of equal partner with the violin. As the second movement’s wistful sadness turned into steely strength the violin took priority, while the playful third movement was a well-balanced conversation between the two, bringing the duo concertante character to the fore. 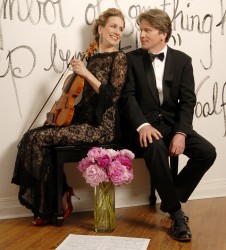 R. Murray Schafer’s Wild Bird, written for the 50th birthday of the flamboyant former concertmaster of the TSO, Jacques Israelievich (“He had just dyed his hair flaming red at the time,” Dahn said in her introduction to the piece.), programmatically lends itself to bird imagery with large swoops and arcs, chirps and plaintive cries in harmonics modifying Bartokian descending phrases on the violin. Here Dahn’s playing was convincing and passionate as it ranged from subtle, quiet glissandi to soaring melodies.

In Robert Schumann’s Sonata No. 1, the romantic melodic warmth of the violin was wonderfully matched by swells on the piano, another example of the togetherness of the duo. Melody upon melody characterized the Allegretto middle movement, with each new phrase bringing out Steeves’ judicious sense of tone quality. The finale featured the intricate passagework of the violin answered by the dense harmonies of the piano. If the violin occasionally seemed more prominent, it was the composer’s doing, not the performers’.

The sublime introduction to the Beethoven sonata illustrated just how well balanced the Duo Concertante truly is. As they continued playing with grace and fire, one of the monuments of the violin-piano repertoire breathed anew. Having just completed recording all ten Beethoven sonatas, their familiarity with the material was evident in this superb performance of the “Kreutzer,” unquestionably the highlight of the recital. The two played up the rich contrasts between fury and repose in the first movement, traded off Beethoven’s idiosyncratic melody splits in the wondrous second and finished with a triumphant mass of non-stop energy in the third.