On January 20, COC General Director Alexander Neef announced the company’s 61st season. Of special significance is that this is the first season planned entirely by Neef. It was clear that Neef looked to see what works the COC had been neglecting because five operas are works the COC has not staged for at least twelve years and two are COC premieres. 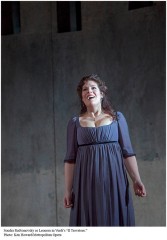 The season opens on October 2 with a new production of Verdi’s Aida directed by Tim Albery and starring Sondra Radvanovsky in her company debut. Next is a new production of Britten’s Death in Venice conducted by Steuart Bedford, who conducted the opera’s world premiere in 1973. The winter season begins with a new production of Mozart’s Magic Flute directed by Diane Paulus and starring Michael Schade and Isabel Bayrakdarian.  This is paired with the COC premiere of John Adams’s modern classic Nixon in China with Tracy Dahl as Madame Mao. The spring season brings a new production of Rossini’s La Cenerentola with Brett Polegato as Dandini; Ariadne auf Naxos with Adrianne Pieczonka and Richard Margison; and finally, and surprisingly, the COC premiere of Gluck’s Orfeo ed Euridice directed by Robert Carsen with Lawrence Zazzo and Isabel Bayrakdarian.

Again the COC Ensemble Studio is allowed to take over one performance of The Magic Flute, rather than being given its own production. This is unfortunate because the Ensemble productions were a way for the COC to stage a wide range of chamber operas, from baroque to  contemporary, that helped to broaden our perceptions of what opera is.