As I write this – on March 20, 2020, five days into Toronto’s period of mass social distancing and self-isolation/quarantine – all live musical performances have been cancelled in Toronto venues for the foreseeable future. While it isn’t possible to know when, exactly, we will all be able to return to some semblance of normalcy, it is still possible to celebrate the April shows that would have been. In this month’s edition of my column, I’ve interviewed five different artists, involved in four different April shows, including a long-term weekly residency at La Rev, a month-long weekly residency at The Rex, a double-album-release show at the Array Space, and a doctoral recital in the jazz performance program at the University of Toronto.

It is imperative, at this critical moment in the history of the Toronto music community, to continue to support one another: musicians, venues, patrons, schools, and publications alike. If you’re new to the artists below, please follow them on social media, check out their websites, and, if you enjoy their music, consider purchasing an album on Bandcamp, or on other services. This goes for any of your favourite local musicians, many of whom, beyond cancelled performances, are also experiencing a drastic cut in teaching, recording and other activities. Also, even in the early stages of this period, many musicians are live-streaming concerts, offering online lessons, and creating new ways to interact with the community. So, please: be in touch! Just not literally. 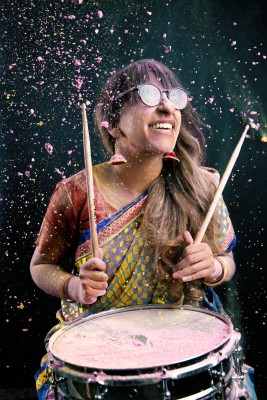 In my column last month, I wrote about the February 7 appearance of the American jazz guitarist Russell Malone at Hugh’s Room Live, an unusually high-profile show to occur in the bleak Toronto winter. What looked like an anomaly for the Dundas West venue, however, now seems as though it’s part of a growing trend. During the week of March 8, Hugh’s Room Live hosts a special event: Drum Week, sponsored by Yamaha. With seven acts taking the stage from Sunday, March 8, to Saturday, March 14, Drum Week will feature leading Canadian and American drummers from multiple generations and stylistic backgrounds.

Starting things off on March 8 is Sarah Thawer, who plays at 2pm. Thawer – who stays busy both locally and internationally as a bandleader, sideperson, and educator – is an exciting, high-energy drummer with a wealth of technique, whose own music incorporates elements of jazz, hip-hop, fusion and other genres. Next up during drum week: the legendary Jimmy Cobb, who, at the age of 91, is the only surviving contributor to the seminal Miles Davis album Kind of Blue, recorded in 1959. Active since the 50s, Cobb has played with a wide range of jazz luminaries in addition to Davis and co., from Dizzy Gillespie, Billie Holiday and Stan Getz, to younger players such as Peter Bernstein, Brad Mehldau and Vincent Herring.

Read more: Drum Week at Hugh’s and Women From Space 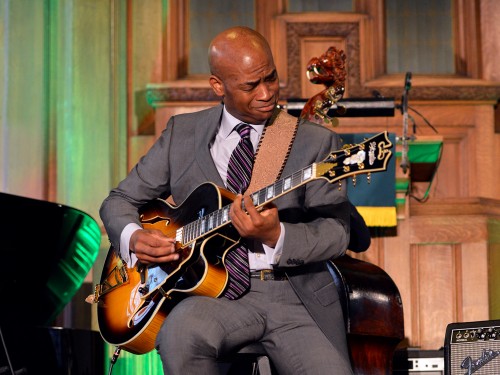 On February 7, the American guitarist Russell Malone plays at Hugh’s Room Live. For those unfamiliar with his work, Malone is a swinging, bluesy player, steeped in the hard bop tradition, who has worked with many of jazz’s leading names, including bassists Ron Carter, Ray Brown and Christian McBride, keyboardists Benny Green, Jimmy Smith and Monty Alexander, and crossover star vocalists Harry Connick, Jr. and Diana Krall. It is unusual to see someone of Malone’s stature playing in Toronto outside of a major festival setting; to see him in a club, as opposed to a soft-seat theatre, is more unusual still, and speaks to the singular nature of this event. Malone favours large, hollow-body guitars, minimal effects and clear, articulate right-hand technique. He is a representative of a jazz guitar tradition that extends back to George Benson, Wes Montgomery and Charlie Christian, and he is an expert interpreter of the Great American Songbook. A highly recommended show, for fans of the guitar generally, Malone specifically and, really, anyone who has an interest in the living history of jazz.

Later on, we’ll conspire
As we dream by the fire
To face unafraid
The plans that we’ve made
Walking in a winter wonderland

“Christmas starts on November 1;” so goes the knowing refrain, spoken in tones of world-weary authority to those affronted by the instant shift from Halloween to Christmas in retail displays, both digital and physical. Those who repeat this defeatist bromide are not necessarily less affected by the sudden onslaught of candy canes and evergreens, of reindeer and elves, of living in a dystopian paternalistic surveillance state ruled by the Clauses. No, they are simply stating the obvious: that the secular advertorial spectacle of Christmas constitutes an overwhelming, inescapable part of our experience of the season, even in households for which the holiday holds a primarily religious significance.

Read more: If Only in Our Dreams

Ah, November. A month so rich in music that it causes one to strain against word limits, bridle at the constraints of the page and discard a number of truly perfect jokes, whose inclusion – if a writer took less seriously his charge to write about, well, music – would have sent this magazine’s readership into dangerous paroxysms of laughter, such that finishing the rest of this column would surely prove impossible. Out of kindness: let’s get to it. 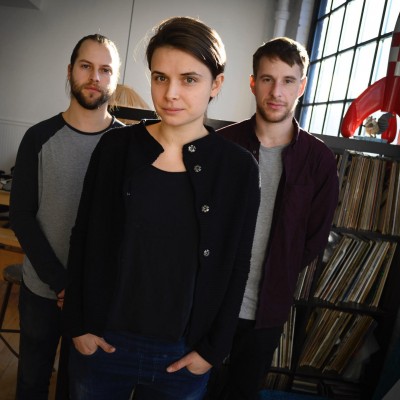 On November 14 and 15, the Montreal-based pianist Gentiane MG (Michaud-Gagnon) leads her eponymous trio at Jazz Bistro in support of her recent album, Wonderland. Though Michaud-Gagnon may be a new name to Toronto audiences, she has been increasingly active on the Canadian jazz scene following her time at McGill, at which she studied with Rémi Bolduc, André White and Jean-Michel Pilc, among others. Her debut trio recording, Eternal Cycle, was on CBC Music’s list of 10 outstanding Canadian jazz albums of 2017, along with the likes of Matthew Stevens, Diana Krall, and PJ Perry. At Jazz Bistro, Michaud-Gagnon brings her working rhythm section, bassist Levi Dover and drummer Louis-Vincent Hamel. The trio’s playing runs the gamut from introspective, pensive ballads to uptempo swingers. Throughout it all, Michaud-Gagnon discharges her pianistic duties with aplomb, playing both single-note lines and lush chords with succinct clarity.

Also at Jazz Bistro: vibraphonist Dan McCarthy, on November 26, appearing in quartet formation with guitarist Ted Quinlan, bassist Pat Collins and drummer Ted Warren. McCarthy’s quartet appears in support of his recently released album, City Abstract, which features the same band. Recorded in May of this year at Canterbury Music Company, City Abstract is something of a homecoming for McCarthy, who, after living and working in New York for 15 years, has moved back to his hometown of Toronto. McCarthy is a superlative vibraphonist, with chops, tone and taste to spare; his performance/recording credits include work with American musicians such as Steve Swallow, Ben Monder and George Garzone, as well as with leading Canadian musicians, including Lorne Lofsky, Terry Clarke and Laila Biali. Though the vibraphone has been something of an uncommon instrument in modern jazz, McCarthy – along with other notable young players, including the American Joel Ross and Toronto’s Michael Davidson – serves as a good reminder of the instrument’s strengths and capabilities, and of the unique music that it makes possible. 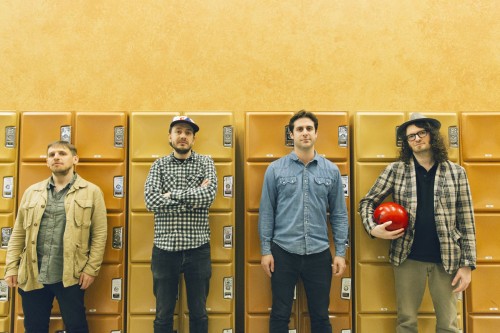 On November 6 and 7, saxophonist Chet Doxas brings the group Landline to The Rex. Though currently a Brooklyn resident, Doxas was born and raised in Montreal, where he attended McGill for both his undergraduate and graduate degrees; his brother, Jim Doxas, is one of Canada’s better-known jazz drummers, and still based in their shared hometown. Landline – whose eponymous debut album will release on November 1 – is a quartet, made up of Doxas, pianist Jacob Sacks, bassist Zack Lober and drummer Vinnie Sperrazza. Landline is something of a family affair: in May of this year, George Doxas, Chet’s father, recorded the album in Montreal at Boutique de Son Studios. Landline gets its name from a two-year-long process of “collaborative composition” by all four members of the quartet, each of whom made contributions to each piece in a process reminiscent of the children’s game “broken telephone.” What this means isn’t precisely clear, but I imagine that all will be revealed at The Rex. What is clear is that Landline represents an intriguing new project from accomplished modern jazz musicians who have played together – both in this specific quartet and in other configurations – for a number of years, with a collective group dynamic that only comes with shared experience. 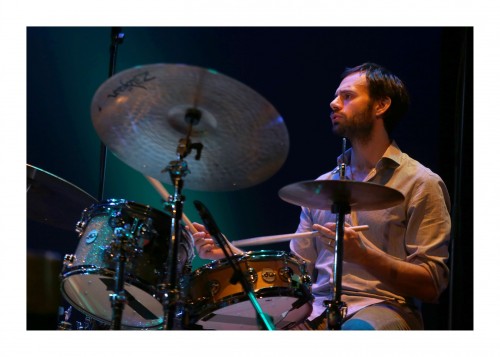 Sacks will be returning to The Rex later in the month with the Dan Weiss Trio, where he – along with Weiss (drums) and Thomas Morgan (bass) – will be playing two consecutive nights on November 20 and 21. The last time that I wrote about Weiss for The WholeNote, it was in the wake of his 2018 Jazz Festival performance with his Starebaby project. Drawing influence from Twin Peaks, the album Starebaby was a study in Lynchian intensity, with bombastic and quiet moments sustained past conventional points of resolution. During the group’s packed Toronto show, this exploratory spirit was on display in full force; the show that I saw qualified as one of the loudest and quietest shows that I’ve ever seen at The Rex, or, for that matter, at any jazz club. Though Weiss’ trio may not have the same mandate for extreme dynamics, it does have the same mandate for intensity and intentionality. It is not hyperbole to say that Weiss is one of the preeminent jazz drummers of his generation; a brief look at his recent schedule reveals engagements with the likes of Nir Felder, Adam Rogers, Miles Okazaki and Chris Potter’s Underground Quartet, amongst many other notable gigs, including his own. As a drummer and as a bandleader, he is much the same: specific, exacting, exciting and, at unexpected moments, funny, in a way that complements the seriousness of his dedication to his craft.

A final note on The Rex: guitarist Robb Cappelletto, who has crafted a unique musical identity that straddles the line between jazz, rock, blues, and other genres, releases his new album Double Red on November 14, in performance with keyboardist Michael Shand, bassist Andrew Stewart and drummer Amhed Mitchel. Cappelletto – a faculty member at York University – has been putting out consistently interesting music since his debut album !!! was released in 2012, both under his own name and with the instrumental group re.verse, which has been heard in its residency slots at 416 Snack Bar and The Drake, as well as at Koerner Hall, collaborating with the likes of Shad and DJ Skratch Bastid. Cappelletto is a fiery player, with ample technical command of his instrument, but what sets him apart from his peers is his conscientious attention to the nuances of tone, and his commitment to building a multilayered sonic world in which his music can live.

NOV 6 AND NOV 7, 9:30PM: Chet Doxas’ Landline, The Rex. Landline, a new project helmed by Montreal-born saxophonist Chet Doxas, play in support of their new self-titled album, the material for which the band composed cooperatively through a musical version of “broken telephone.” With pianist Jacob Sacks, bassist Zack Lober and drummer Vinnie Sperrazza.

NOV 20 AND NOV 21, 9:30PM: Dan Weiss Trio, The Rex. Playing compelling modern jazz, drummer Dan Weiss’ trio, with pianist Jacob Sacks and bassist Thomas Morgan, has been active for over a decade, and has developed a thrillingly intuitive musical connection.