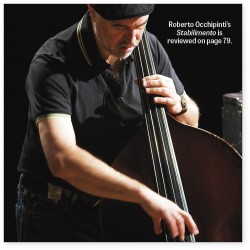 One of my very favourite Canadian jazz albums is one called Valentina, featuring a quartet led by Italian-Canadian pianist, composer and successful entrepreneur Mario Romano. Romano’s bandmates, including Pat LaBarbera on the sax, Roberto Occhipinti on the bass and Mark Kelso on the drums, support him on his imaginative journey through yet unexplored possibilities of old standards like Green Dolphin Street, A Night in Tunisia and Nardis. Romano revamps these tunes with stretched-out interpretations of the melodies, low-end ostinatos and fun new rhythmic underpinnings that frame the heads in interesting ways (without compromising their integrity).

Valentina (released in 2010) is sometimes cerebral and complex, and sometimes primitive and aggressive, but it is, through and through, riveting and beautiful.

Romano’s playing on the album is astoundingly unrestrained. I can’t speak for anyone’s ears but my own, and this is just speculation, but it sounds to me like after the three-plus decades he spent away from the music scene, he returned with a lot of pent-up creative and physical energy. The result was Valentina; I cannot recommend this album enough.

With the exception of Romano, who has been conspicuously absent from the live scene for a number of years, every member of the quartet that played on Valentina can be found leading their own fine ensembles, and acting as sidemen about town; and each can be heard this month at least once. Kelso will be behind the kit with Rich Brown’s Abeng at The Rex on the February 23 and 24; on February 10 and 11 LaBarbera will be on the same stage with an ensemble featuring Kirk MacDonald as well as drummer Adam Nussbaum (about whom I am especially excited); and Occhipinti will be playing with his own quintet (Luis Deniz, Tim Ries, Dafnis Prieto and Manuel Valera) at Jazz Bistro on February 17 and 18. Coming full circle, in Occhipinti’s case the concert is to celebrate the release of a new CD, Stabilimento, featuring the quintet.

Night School Twilight: Since she was a kid, Chelsea McBride has been writing original music. From when it started with, as she puts it, “messing around with little pop songs,” to the present in which she leads and co-leads at least five ensembles in varying styles and genres, McBride has had a drive to create; not to recreate what’s been done, but to create music that is new, interesting and authentically her own. “My whole thing is original music,” McBride says, “I love doing covers, but it’s not me as an artist and composer.”

This is an endeavour which, for any creative person, is never-ending. It’s one that requires not only curiosity and imagination, but dedication and hard work. A whole lot of hard work.

And that labour bears fruit; Socialist Night School, McBride’s large ensemble project which, for five years, has served primarily as a vehicle for her own composition and arranging, released The Twilight Fall, their first full-length album (their second recorded effort after a short, self-titled EP was released in the spring of 2014) this January, on McBride’s 25th birthday.

The music on The Twilight Fall seems to tell a story. Even though there are some tracks with words (sung by the illustrious Alex Samaras, about whom I have written before), it’s hard to decipher what, exactly, that story is. But it’s there. One song speaks to the next. Universal themes are suggested by the lyrics. Tunes range from the angular and assertive (Intransitory) to the poignant and mellifluous (In Dreams).

Like Valentina, I can’t recommend The Twilight Fall enough. It’s the kind of album that you can’t use as background music. It insists upon the foreground. It’s a time commitment of about an hour, but it will pay off.

You can see Socialist Night School live at The Rex on February 20 at 9pm. I have no way of knowing what the cover charge will be, but just like the time commitment you put into listening to the album and doing nothing else, it will be worth it.