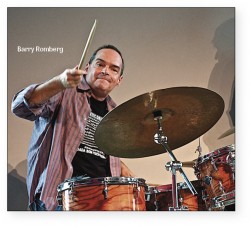 Nobody in the world sounds like Barry Romberg. On top of the  evident influence from certain prominent drummers of the last 50 years in rock and jazz (I think of Keith Moon and John Bonham, I think of Elvin Jones, I think of Bill Stewart), and on top of the playful way he and the rotating cast of musicians who appear on stage with him will imply and weave in and out of various related tempos and grids, just to keep things interesting, and on top of the sweaty machismo with which he plays the instrument (which should not be mistaken for a lack of subtlety, but it is loud, and if you’re going to sit right at the front you should probably wear earplugs), there is a certain frankness about everything he does. Although it’s often complex, dark, ethereal, innovative, or just weird, it’s always music without pretense. Romberg presents the tunes as tepidly, casually, as would a singer-songwriter with an acoustic guitar at your local coffee house. The titles of the tunes even sometimes offer a hint as to what’s musically going on. He evidently feels that the music will speak for itself, that it requires no air of mystery, nothing to set up the mood. 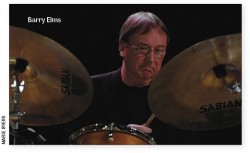 Actually watching (forget your ears for a moment) as Romberg plays the drums is a ton of fun. It’s a wonder to behold. His body language tells all that may not already be aurally apparent: when something interesting is happening that he sees fit to play off, his ear will often lean towards the responsible player, like a growing sunflower to the sun. His shirt will often become more visibly saturated with sweat as the night goes on, a tangible measure of how hard he’s been working. His facial expressions range from satisfaction to immense concentration to apparent anger. He hits the drums with almost comical aggression. Before you even hear it, it’s a thrill to watch. I have never heard Romberg play under the “Barry Romberg Group” name – only under other names such as Random Access and Three Blind Mice, so I really don’t know what will be going down at The Rex on the evening of November 27, but I’m certain, to the degree one can be certain of anything, that it’ll be, as an understatement, enjoyable.

The Pilot: Just one other thing before I wish you a merry winter. A few Saturdays ago, I went to The Pilot for the first time. It seems absurd that The Pilot has been showcasing some of the best musicians in the city for every Saturday of my life and then some, without charging a cover, and I hadn’t been until just this season. I didn’t plan to go to The Pilot; I wandered in off the street. When I arrived, the place was packed, with hardly any standing room left anywhere but the patio. The band, which turned out to be the Barry Elmes Quartet, was on a set break, so I took an empty seat right near the playing area (the musicians do not perform on a raised stage) and was eventually overjoyed to find out who I was settling in to hear. Heavy names are constantly showing up in the listings under The Pilot. Names like Barry Elmes, like Neil Swainson, like Ted Quinlan, like Alexis Baro – names that make me want to perpetually book off Saturday afternoons.

I hope to see more of you warming up in the clubs this winter, and I hope you’ll see more of me doing the same!