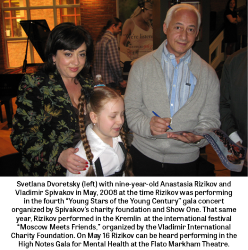 Sometimes it’s not only what you know but who you know. Show One Productions’ founder Svetlana Dvoretsky came to Canada from St. Petersburg in 1998. Culture was a huge part of her upbringing – her mother, after a brief career as a concert pianist, taught piano – and Dvoretsky wanted to be an arts administrator here, having studied management in show business. So she looked for a job in the arts when she arrived but only volunteer positions were available. Instead she worked in retail – “the immigrant school of learning” – then in the corporate world before scratching her “itch” and launching Show One.

It had taken five years, but she was ready. When violinist-conductor Vladimir Spivakov came to Toronto for a concert she sought him out – he and her mother had been students together – and fortune smiled. She buttonholed him on an elevator from floors one to three, just enough time to garner an invitation to meet his management in New York City. She flew south and returned with Spivakov’s endorsement that she bring him to Toronto for his next concert here. “It was a lot of trust on his part,” she admitted. Show One piggybacked onto Spivakov and the Moscow Virtuosi’s 25th Anniversary World Tour with their concert October 30, 2004 at George Weston Recital Hall.

Working with Spivakov’s charitable education foundation, she launched “Young Stars of the Young Century,” a showcase for the crème de la crème of talent from the vast reaches of the countries of the former Soviet Union, alongside a dollop of young Canadians. Five more concerts followed, ending in September of 2009. Dvoretsky was clearly doing something right.

In between the first two “Young Stars” events, she got her feet wet with two popular vocal concerts, Mikhail Turetsky’s Men’s Choir and a second featuring Svetlana Portnyansky and Yevgeni Shapovalov fronting O. Burman’s jazz quartet. The Moscow Chamber Orchestra with soprano Galina Gorchakova and a memorable performance by the legendary Borodin String Quartet firmly established her presence. Not even 13 months had passed since Show One’s debut.

Dvoretsky broadened her reach by linking into Gidon Kremer and Kremerata Baltica’s Tenth Anniversary Tour in the spring of 2007 and then conquering Roy Thomson Hall with Russian superstar baritone Dmitri Hvorostovsky backed by the Moscow Chamber Orchestra that fall. When Spivakov returned with the Moscow Virtuosi and pianist Olga Kern on their 30th Anniversary Tour, Dvoretsky booked them into RTH. She did the same for premier violist-conductor Yuri Bashmet and the Moscow Soloists the following winter. Two months later, Spivakov was back at RTH, this time with his other regular gig, the National Philharmonic of Russia, featuring Siberian-born piano phenom Denis Matsuev (who would return twice under the Show One banner in solo recitals at Koerner Hall).

Less than a year later she paired Dmitri Hvorostovsky with the fast-rising young soprano Sondra Radvanovsky in RTH. Meanwhile she branched out to Montreal, presenting Valery Gergiev and the Mariinsky Orchestra with Matsuev, and then native son Yannick Nézet-Séguin and the Rotterdam Philharmonic with violinist Victoria Mullova as soloist. She would bring Gergiev back twice more and widen her terrain to include Ottawa, Hamilton and Vancouver.

She brought Michel Legrand, John Malkovich and Placido Domingo to us as well as cellist Mischa Maisky for the first time since 1976 (with Yuri Bashmet in a superb program commemorating the 20th anniversary of the Moscow Soloists Chamber Orchestra, then last fall in a recital at Koerner Hall).

Dvoretsky will celebrate Show One’s tenth anniversary with two world-class concerts: Spivakov, clearly her backbone, returns for the sixth time, May 9 at RTH with the Moscow Virtuosi Chamber Orchestra’s 35th Anniversary Tour; Hvorostovsky is back for the third time, June 1, in recital at Koerner Hall with pianist Ivari Ilja. May 9 everyone is invited to a post-concert lobby performance and reception at RTH featuring Canadian-Italian Daniela Nardi’s jazz world project Espresso Manifesto. It’s been quite a first decade. What will the second bring?

The unpredictability of events is certainly a boon to the Ontario Lottery Corporation (among others) but when it smiles unexpectedly (as it did on me a few weeks ago) and reveals its serendipitous side it’s capable of bestowing a big gift.

Richard Goode, in Toronto for appearances with the TSO, was scheduled to give three masterclasses at RCM. Circumstances dictated that I was able to attend only one, Friday afternoon, April 4. The first thing that struck me as I picked up the information sheet at the entrance to Mazzoleni Hall was that there was only one piece on the agenda, Mozart’s Piano Concert No.22 in E-flat Major, K482. The name of Goode’s student for the masterclass, Jan Lisiecki, evoked recognition and disbelief in equal measure: Canada’s own wunderkind, Gramophone award winner, with two DG CDs already under his belt, several summer music festival appearances scheduled, and on the horizon this upcoming November, TSO concerts dedicated to Beethoven’s final three piano concertos.

Lisiecki had just turned 19, Goode was well into his 71st year (he made his TSO debut in 1963). Lisiecki began to play, a 750 ml bottle of San Pellegrino on the floor, his tone steely, the notes tight and crisp. Goode characterized Lisiecki’s playing as “very beautiful, natural, satisfying.” Goode offered a few words: “Feel the force of the passage go all the way through.” Pointing to the bottom of a page, Lisiecki asked what Goode thought of “those two bars.”

“I liked it,” Goode answered.

Goode followed the second movement’s dark melody intently, looking at the score, writing something in pencil (he wrote nothing during the first movement). Suddenly, Lisiecki, who has joy, youth and polka dot socks on his side, leapt up to turn the page of the accompanying pianist’s score before returning to his own piano without missing a beat. For his part, Goode had much to offer at the movement’s conclusion. “I think this is a delicate andante,” he pointed out. “It comes down to which notes to stress and which you want to be less important.” He played the five-bar phrase: “The most important thing is to think of the voices as moving not vertical.” And he added that just because Mozart doesn’t write elaborate dynamics, it doesn’t mean he wouldn’t have played them.

Goode then demonstrated his own consummate pianism, showing off his musicianship in phrasing that emphasized the important passages.

Goode interrupted the joyous third movement several times, acting like a conductor, standing, rolling from side to side, commenting, singing his instructions which seemed a more comfortable way for him to communicate his thoughts (Tellingly, he did verbalize one piece of advice, asking Lisiecki to play a little slower “but with the same pizazz.”) Following Lisiecki’s effortless passagework and an admonition not to “upset the serenity of it,” Goode announced to the audience of 20 or so that “Jan will play some Chopin for you.”

The half dozen Preludes were like ice cream on the afternoon’s cake. Lisiecki displayed a more rounded tone than in the Mozart and Goode offered some salient bon mots. It goes without saying that Lisiecki is a brilliant talent; the trick is to tamp down the brilliance when appropriate. The afternoon saw him being schooled by the old school.

Eight days later, Goode brought his consummate skills to the public in a performance of Mozart’s Piano Concerto No.17, K453 with the TSO under Peter Oundjian. The notes of the first movement melted into the keyboard like butter. Goode gave them a liquid quality but with much definition, well-paced, relaxed, unrushed. The pianist quietly underlined the shape of the arpeggios behind the orchestra, his playing emotionally restrained but tonally lush, practising what he had preached in the masterclass by not emphasizing every note, letting many fall in service of the phrasing.

The darkly capricious second movement gained nobility as Goode displayed a brighter tone in the cadenza while the bright finale showed the classicist at work and play.

The following week I was privileged to sit in on a rehearsal of Brahms’ Piano Concerto No.1 with soloist Hélène Grimaud and Andrey Boreyko guest-conducting the TSO. It was fascinating to hear the concert the next day and notice how the orchestra had faithfully followed the conductor’s instructions; for example, Boreyko had wanted exact articulation in the opening of the first movement. “It is not a question of loudness,” he pointed out. The French horn solo on the other hand, was equally gorgeous in casual dress and in tails.

As for the remarkable Ms.Grimaud, her piano playing was strong and convincing in the rehearsal, each chord struck purposefully, each note sounding lyrically. In the concert she displayed a much greater dynamic range adding rounded pianissimos in particular to expand the music’s range. Her intimate pianism exposed the intrinsic beauty of the slow movement written “for Clara,” Schumann’s wife with whom Brahms was enamoured. (In the rehearsal, before taking up the second movement, Boreyko reminded the orchestra that the concerto was Brahms’ emotional reaction to his friend Schumann’s suicide attempt.) And Grimaud entered fully into the passion of the third movement with its rhapsodic cadenza spurring the audience into an immediate standing ovation.

Mozart in a Day

Violinist Jacques Israelievitch and pianist Christina Petrowska Quilico will play the complete Mozart violin sonatas Sunday, May 4 at Gallery 345. The opportunity to hear all 28 sonatas performed live in one day is likely a first for Toronto audiences. The marathon will be divided into four concerts beginning at 11am, 1pm, 3pm and 5pm, with only short breaks in between.

“Playing the sonatas in one day allows the listener to hear the evolution of the form as the composer goes from featuring mostly the piano to making the violin gradually the equal of the piano,” Israelievitch says. “The earlier sonatas are generally simpler, as Mozart honed his craft. They evolve into works of greater complexity and depth. The performance itself requires a lot of stamina. I am fortunate in having a piano partner who is up to the task.”

In preparation, the two musicians are doing a lot of stretching exercises.

Less than two weeks after his Mozart marathon, Israelievitch joins Benjamin Smith, piano, and Jihyun Ahn, cello, in a trio of trios by Beethoven, Shostakovich and Schumann May 16 at Gallery 345.

Sondra Radvanovsky continues her productive sojourn in our city with a performance of Richard Strauss’ exquisite Four Last Songs June 5 and 7 at RTH with the TSO conducted by Shalom Bard.

One of the many standout concerts presented by the Kitchener-Waterloo Chamber Music Society in the coming weeks is by Trio Arkel (Marie Berard, violin, Teng Li, viola, and Winona Zelenka, cello) May 12. Another is the first concert in QuartetFest 2014 by the Penderecki String Quartet June 1. An intriguing follow-up in the same series finds the Chiara Quartet performing their program of Haydn, Bartok and Brahms entirely by memory. More details on this latest incarnation of QuartetFest can be found on the k-wcms website.

The Kitchener-Waterloo Symphony led by Edwin Outwater attractively pairs Aaron Copland’s Suite from Billy the Kid with Leonard Bernstein’s Symphonic Dances from West Side Story May 2 to 4; on May 30 and 31, Karen Gomyo is the soloist in Tchaikovsky’s Violin Concerto in D in a program that also features Stravinsky’s Petrushka and Sokolovic’s Ringelspiel.