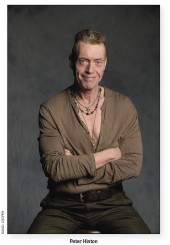 While there are several noteworthy operas on offer in April, one looms over them all. This is the COC’s first new production of Harry Somers’ Louis Riel since it premiered in 1967. Co-produced by the Canadian Opera Company and the National Arts Centre, the new production will give Canadians the rare opportunity to see what has often been called the greatest Canadian opera ever written.

Written and performed for Canada’s centennial in 1967, Louis Riel is being revived for the sesquicentennial this year. Reasons for the scarcity of productions of it are not hard to see. The opera is in three acts and 17 scenes, requires a chorus, a 67-member orchestra and has 39 named roles. Composer Harry Somers and librettist Mavor Moore wanted to create an epic opera on the model of French grand opera and one could say they succeeded only too well.

In an interview in March, director Peter Hinton threw light on how he plans to meet the many challenges that the opera poses. Speaking of his concept for the production, Hinton explained, “What we’ve tried to do is create a setting that can serve each of the locations of the opera but also create a sort of container of imagery that in some ways sets the entire opera at the trial of Louis Riel. So on the one hand the set resembles Fort Garry, an enclosure, the contrast of a colonized building against an incredible landscape of the land, and also a courtroom where the events of history are put on trial and we’re examining the motivations and intentions behind enormous ideas like governments, justice, confederation. So it was very challenging but very exciting because the ideas of the opera are really big, the history is very big, and not surprisingly it’s very contemporary. Yes, it’s a historical story, but it’s one that continues to speak to us today.”

Hinton said that Somers and Moore made an intriguing choice of subject for an opera meant to celebrate Canada’s centennial: “I thought it was very interesting that they chose the history of Louis Riel. And I think that’s a very key kind of distinction because when I first sat down to listen to it I suspected it might be a very pro-Canada, ‘we are one nation,’ idealized kind of history telling. But I was really taken with how critical it is, how it brought forward the problems of Confederation, that it exposed Sir John A. Macdonald and his political motivations for Confederation in a very critical way. And so it poses very contemporary questions about what are we commemorating, what are we celebrating, what, in addition to our history of achievement, [are] our losses, our injustices, what continues to be needed to be worked out and expressed and understood today.”

Thus, Hinton’s concept for the opera as a trial means more than Riel’s trial. Canada and how it was founded are also on trial. In addition, Hinton points out, he is re-examining the opera itself: “In another way we’re sort of putting the opera on trial. Clearly, if the COC were to take on creating a new opera today about Louis Riel, it would have more indigenous and Métis involvement in the creation of it. So even more than the challenges of staging the narrative of Louis Riel, the politics of it have been much more challenging and very, very difficult to reconcile oneself with because opera itself might be characterized as one of the most colonial art forms because its roots are so Eurocentric.” 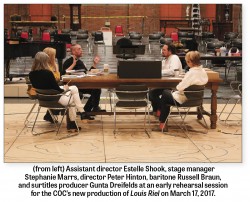 The solution, as he explains it, was to treat Harry Somers’ and Mavor Moore’s opera as an artifact of its time.

“It reflects very much the aesthetic sensibilities of contemporary music of the 1960s and it has great dramatic strength and power and beauty. It also has many colonial biases. So part of the job here is to do the opera and let its beauty be heard and soar and not be afraid to cast light on its biases; not to pretend the opera is an Indigenous creation – it is definitely created by two white settler guys – but to try to open up a more inclusive representation in the show.

“And I have to say honestly that [COC General Director] Alexander Neef knew exactly what I was talking about…it took me a long time to make a commitment to be involved because of issues about inclusion and appropriation especially in light of Truth and Reconciliation. I’m very aware of my privilege and my own cultural heritage as a director for the piece. So I really had to think a way through that I could contribute without continuing a legacy of misrepresentation.”

To achieve this, Hinton has re-envisioned the opera’s chorus: “In the original production there was one very large opera chorus who played a variety of roles from members of the Métis Assembly to demonstrators at an Orangemen’s protest in Toronto. And I decided to split up the chorus and identify them culturally. So we in fact have two choruses in this production – one which we are calling the Parliamentary Chorus. This chorus is in modern dress and sing the allocated choral parts in the score but they are removed from the action. They sit above in a gallery not unlike visitors to a house of parliament and comment on the opera, debate the opera, encourage characters within the narrative to act or not. But they do nothing. They have no physical impact on the story or its outcome. They comment.

“In contrast and in equal representation in the show is a 35-member Indigenous chorus who are a physical chorus and we’re calling them the Land Assembly. They physically embody the world in which the narrative Riel is enacted and are directly involved in all of the action but are not given a voice. So in many respects the opera is one about silence, about who speaks on behalf of whom, and who gets a voice and who doesn’t. And so what I’m very hopeful about is that our Land Assembly brings a very strong Indigenous representation of bodies on stage and has an impact of reminding the audience as they see this story enacted that land is also about people. And the opera is also very much people and groups and where does someone stand as an individual, what do they represent. That’s one aspect of the show that will be very different from the way it was done 50 years ago.”

The COC has cast Indigenous men and women to make up the Land Assembly. In addition new characters have been added to the opera to present a more informed history of the Métis and Indigenous people. The previously unattributed opening vocal line is now delivered by a character known as The Folksinger, to be sung by Jani Lauzon, a singer of Métis heritage. The new role of The Activist, to be played by Cole Alvis of Métis-Irish/English heritage, will deliver the Land Acknowledgement as the opera unfolds, setting the tone for interpreting the action playing out on stage.

A separate group of 30 artists will play the 39 named characters in the opera with baritone Russell Braun as the title character. Among these are Joanna Burt, a Métis/Saugeen Ojibway artist, who sings Sara Riel, Cree actor and playwright Billy Merasty as the Plains Cree chief Poundmaker and Cree bass-baritone Everett Morrison as Cree war chief Wandering Spirit.

Justin Many Fingers, a singer, actor and dancer from the Lavern Kainai Blackfoot Reserve in southern Alberta, will perform two dance sequences titled “Buffalo Hunt,” in the last scene of Act II, intended as a reenactment of a Métis buffalo hunt.

Asked if, despite the opera’s biases, it is still a work worth being revived, Hinton answered, “Definitely. I think it’s a magnificent work of art. And it’s really important that we revive it and examine it. It was the first opera written by Canadians with a Canadian story produced at the Canadian Opera Company and so it’s a very interesting thing to take a look at what was created 50 years ago, where we have come in that time and how this piece sits within the repertoire of the works the COC does. I think it’s a really important complement to that. And I think the work is very powerful and very strong, but it requires context.

“We have to look at Louis Riel as one of the first civil activists. He’s right up there to me with Martin Luther King and Malcolm X in the states. He was an incredibly progressive person for his time. So looking at the history again in operatic terms is incredible and the show has enormous, enormous power and range, from satire in the way that Macdonald and Cartier and their political manoeuvres are expressed, to deep tragedy of someone who gave his entire life for justice for the people and maybe expressed it best in losing it. There’s a tragedy in that. It’s a magnificent work in that regard, so all of the efforts of this production are to bring that genius to light in it and to see how we can see that with the knowledge we have today. Producing the work is not just a chance to look but but also to guide us forward.”

Louis Riel runs for seven performances from April 20 to May 13 at the Four Seasons Centre in Toronto and on June 15 and 17 at the National Arts Centre in Ottawa.