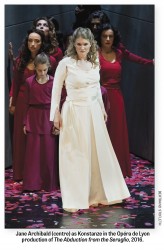 On January 12 the Canadian Opera Company unveiled its 2017/18 season. The season will include the return of two recent COC productions, new productions of three operas not seen at the COC for 17 years or more and a company premiere of an opera by Richard Strauss. It is a well-rounded season that ought to have wide appeal.

One new feature in the evolution of the COC as a company was announced: the naming of its first artist-in-residence. For the coming season this will be renowned Canadian soprano Jane Archibald, who will appear in three of the six operas. In addition to her season-long residency, Archibald will perform in the COC’s Free Concert Series in the Richard Bradshaw Amphitheatre and work with the young artists of the COC Ensemble Studio and Orchestra Academy training programs in a mentorship capacity.

COC General Director Alexander Neef comments, “It’s exciting for the company and our audiences to have someone of Jane Archibald’s calibre choose to spend so much of her time with us… This kind of commitment from Jane is a testament to the international reputation of the COC, solidifying the company and our opera house as a showcase for the world-class talent working in opera today.”

Fall 2017: Opening the fall season from October 5 to 28 will be the company premiere of Richard Strauss’ Arabella (1933). Only the fifth opera by Strauss the COC has ever staged, Arabella is a co-production with Minnesota Opera and Santa Fe Opera and premiered with the latter company in 2012. The opera was Strauss’ final collaboration with his favourite librettist, Hugo von Hofmannsthal, who had written the libretti for Elektra (1909), Der Rosenkavalier (1911) and Ariadne auf Naxos (1912).

Arabella is a comedy set in Vienna in 1860 dealing with the financial crisis of the Waldner family. The family has two daughters, the beautiful Arabella, who needs to marry a wealthy man to save the family, and the younger Zdenka, whom they have brought up as a boy to save the expense of her coming out as a debutante.

Running in repertory with Arabella from October 11 to November 4 is a new COC production of Donizetti’s The Elixir of Love (L’elisir d’amore) from 1832. Elixir has not been seen at the COC since 1999. The new production is based on the 2008 co-production from San Francisco Opera, Colorado Opera and Kansas City Opera. American director James Robinson has relocated the action to a small town in the period before World War I. In this gentle comedy, the poor and shy Nemorino has fallen in love with the wealthy Adina. Despairing that Adina will fall for the dashing Captain Belcore, Nemorino buys a love potion from the travelling charlatan Doctor Dulcamara consisting only of red wine.

Winter 2018: Beginning the winter season in 2018, from January 20 to February 23, will be a revival of the COC’s production of Verdi’s Rigoletto directed by Christopher Alden and last seen in 2011. Audiences will recall this production as the one where the entire action is set inside the central room of a Victorian men’s club. English baritone Roland Wood sings the title role and American soprano Anna Christy is his daughter, Gilda. American tenor Stephen Costello shares the role of the vicious Duke of Mantua with American tenor Joshua Guerrero. Georgian bass Goderdzi Janelidze makes his Canadian debut as the assassin Sparafucile and Canadian mezzo-soprano Carolyn Sproule makes her COC debut as Sparafucile’s sister Maddalena. Stephen Lord conducts.

Running in repertory with Rigoletto from February 7 to 24 is Mozart’s The Abduction from the Seraglio (Die Entführung von dem Serail), not seen at the COC since 1980. The opera concerns the efforts of the Europeans, Belmonte and his servant Pedrillo, to rescue their sweethearts Konstanze and Blonde from captivity by the Muslim Turk, Bassa Selim. In this co-production with Opéra de Lyon, Lebanese-Canadian playwright and director Wajdi Mouawad has added his own prologue and reworked some of the dialogue to avoid caricature of the Muslim characters.

Spring 2018: The COC spring starts with the season’s only nod to modernity, a revival of Robert Lepage’s spectacular production of Stravinsky’s The Nightingale and Other Short Fables running from April 13 to May 19. Most notable as the production where the orchestra is on stage and the orchestra pit is filled with water, Nightingale, last seen in 2010, uses all forms of puppetry from East and West to illustrate songs by Stravinsky as well as the short operas Renard (1922) and The Nightingale (Le Rossignol, 1914).

Making her role debut as the Nightingale is Jane Archibald in her third opera of the season. Singing the Fisherman, who discovers the Nightingale, is Owen McCausland. The Emperor, whose life is saved by the Nightingale, is sung by American bass-baritone Christian Van Horn and American contralto Meredith Arwardy sings the role of Death. Johannes Debus conducts.

Concluding the 2017/18 season is the third in Donizetti’s so-called Three Queens Trilogy – Anna Bolena from 1830. The last time Toronto heard this work was in 1984 with Joan Sutherland in the title role and Richard Bonynge conducting. This time COC favourite Sondra Radvanovsky sings the role of Henry VIII’s spurned queen, the third queen after her Maria Stuarda in 2010 and her Elisabetta in Roberto Devereux in 2014.

Tim Albery returns to direct his acclaimed production and COC music director Johannes Debus takes the plunge by conducting the massive opera for the first time.