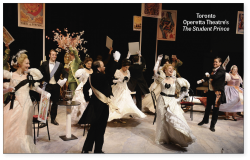 This December and January, there are far more operatic offerings than is usually the case. The largest-scale production will be the Canadian Opera Company’s revival of Wagner’s Siegfried beginning January 23, but that production is preceded by works of a wide variety of musical styles.

FAWN: The first of these is the world premiere of l’homme et le ciel by much-in-demand composer Adam Scime playing on December 3 and 4 at The Music Gallery. It is produced by FAWN Chamber Creative, a company dedicated to bringing new, affordable Canadian chamber opera to Toronto. The libretto by Ian Koiter is based on the Greek text The Shepherd of Hermas from the second century. The story concerns a former slave named Hermas, once owned by a woman named Rhoda, who begins to fall in love with her when they meet again even though Hermas has married. Over a period of 20 days Hermas receives five visions in which Rhoda appears as his heavenly accuser and tells him to pray for forgiveness. In the fifth vision a messenger appears disguised as a shepherd who delivers ten ethical precepts on how to live a Christian life. In Koiter’s version the sacred is a mirror of the profane and Hermas comes to see that his visions derive from repressed sexual impulses.

The 45-minute-long opera, written for a six-piece ensemble and live electronics, will be conducted by the composer. Baritone Alex Dobson sings Hermas, soprano Larissa Koniuk is Rhoda and soprano Adanya Dunn is The Messenger. Stage director Amanda Smith states: “This event will not only be for avid operagoers but for anyone with a hint of musical adventure and curiosity.”

Against the Grain: Following this world premiere is a new look at one of the most inescapable musical features of the Christmas season – Handel’s Messiah. This is a revival of Against the Grain Theatre’s highly acclaimed production of the oratorio in 2013. What places this Messiah in the opera category is that it is fully staged, costumed, choreographed and artfully lit. The cast has memorized their parts to eliminate the need for music stands and choral folders and to allow AtG’s artistic director Joel Ivany and choreographer Jennifer Nichols to use movement to bring out the meaning of the the oratorio.

As Ivany explained in correspondence: “What I’ve found by working on pieces that are not traditionally staged is a new form. It lives more in the world of ballet and contemporary dance. In dance, what you normally have is the mix of music with the movement of the body. The music enhances what the body is doing and, similarly, the movement by the dancers enhance the music.” Exposure to dance caused Ivany to ask: “What if we placed more specific movement in opera and song? Can gesture by a singer cause the same stirring as the movement of a dancer?” Of Messiah in particular, Ivany says, “This work is about peace and striving for good. For this production, I believe that having movement can help accomplish this by enhancing the music with the visual.”

Since the movement and choreography in this production will differ significantly from that in 2013, AtG’s 2015 Messiah is essentially a new show. Ivany says that he and Nichols have striven to create more of a narrative this time. The notion is: “We’re all on a journey. We can pinpoint where it began, and we know that there are several stops along the way before we arrive at our final, unknown destination. AtG’s Messiah highlights, in a somewhat abstract way, some of those ‘stops’ along our life journey.”

As for the soloists, they “do play specific roles, meaning they are each the same ‘person’ throughout the entire production. However, who that person is, is another question. I think they represent all of us – four different people, four different personalities and four different ranges of music and emotion.”

Messiah will be the largest-scale production AtG has ever mounted, and this time the Corporation of Roy Thomson Hall and Massey Hall is partnering with AtG. Music director Topher Mokrzewski will conduct an 18-piece orchestra and a 16-member chorus. The soloists will be soprano Miriam Khalil, mezzo-soprano Andrea Ludwig, tenor Owen McCausland and bass-baritone Stephen Hegedus. AtG’s Messiah runs from December 16 to 19.

TMT’s Mummers’ Masque: Opening just a day after Messiah, is another work that looks at an old tradition in a new way. This is The Mummers’ Masque by Dean Burry presented by Toronto Masque Theatre, December 17 to 19. TMT gave The Mummers’ Masque its world premiere in 2009 and is bringing it back because of its great success. Burry was born in Newfoundland, the one province in Canada where mummering, brought over by the province’s first English and Irish settlers, has remained a living folk tradition at Christmastime.

In the piece Burry weaves together three different versions of mummering. The oldest is that of mummers’ plays with stock characters, as Burry informed me in conversation, rather like an English folk version of commedia dell’arte. The plays always feature a hero, often St. George, and a villain, usually called the Turkish Knight – a memory of when the Ottoman Empire had made great incursions into Europe. Sometimes there would be a Princess, but the character who always appeared was the quack Doctor. In the plays, either the Hero or the Knight is killed in battle and the Doctor, through various outrageous cures, brings the dead man back to life. Though the plays are comic, the theme of death and resurrection is what ties them to the winter solstice and to celebrations of Christmas and New Year.

Mummering, or mumming, which derives from the German word for “disguise,” presently survives in Newfoundland as a form of “adult Halloween,” as Burry calls it, where people go from door-to-door in homemade costumes, usually cross-dressed, while playing instruments, singing and dancing. The people of the house give their strange visitors food and drink and try to guess their identities. The third tradition Burry uses is that found in the parts of Newfoundland settled by the Irish. This involves the mummers carrying a dead wren – nowadays just a likeness of one – and asking for money to bury it. Wren Day is December 26 and it is theorized that the wren represents the death of the old year, with December 25 as its last day.

Musically, Burry’s task as a composer was to blend his own modern classical idiom with the folk idiom of Newfoundland while allowing for audience participation in the singing of hymns and carols. Burry says that the greatest challenge was finding musicians who would be comfortable in both classical and folk traditions, especially in the case of the flutist, Ian Harper, who has to play the flute, the penny whistle and the uilleann pipes. The opera also contains the only known classical solo for the Newfoundland ugly stick, a homemade instrument made of a mop handle, a rubber boot and bottle caps nailed to the handle.

In The Mummers’ Masque, Carla Huhtanen will sing St. George, Marion Newman will be the Rival Knight and the Dragon, Christopher Mayell will be Princess Zebra and Giles Tomkins will be Father Christmas. There will also be step dancers and a children’s choir. Larry Beckwith will conduct the five-member band from the violin and Derek Boyes is the stage director.

TOT’s Student Prince: The main production for Toronto Operetta Theatre always straddles the old and new year. This season the operetta will be The Student Prince by Sigmund Romberg from 1924 playing December 27, 28, 31, January 2 and 3. The Student Prince was the longest-running work of music theatre in the 1920s with hits like Golden Days, Deep in My Heart, Dear and the tenor aria Overhead the Moon is Beaming. Since 1974 the operetta has been performed annually in the original English in its nominal setting at the University of Heidelberg. This will be the operetta’s third staging by the TOT – the first in 1989, the second in 2001/02.

The story uses one of the main plot clichés of operetta, the disguised aristocrat who falls in love with a commoner, but here the focus is not on the particulars of the plot but rather the universal feelings of nostalgia and regret for past deeds. Tenor Ernesto Ramirez sings Prince Karl Franz, who as a student falls in love with the local barmaid Kathie, soprano Jennifer Taverner. Tenor Stefan Fehr and baritone Curtis Sullivan are also in the cast. COC resident conductor Derek Bate is at the podium and TOT general director Guillermo Silva-Marin is the stage director.

COC’s Siegfried: The COC begins its winter season with a remount of its highly acclaimed production of Richard Wagner’s Siegfried by François Girard. The production debuted in 2005 and was last seen as part of the COC’s complete Ring Cycle in 2006. German tenor Stefan Vinke, one of the finest Siegfrieds in the world, makes his Canadian debut in the title role. Returning in the role of the warrior maiden Brünnhilde, after universal acclaim as Brünnhilde in Die Walküre earlier this year, will be American soprano Christine Goerke. Austrian Wolfgang Ablinger-Sperrhacke makes his Canadian debut as the sly dwarf Mime who raises Siegfried for malign purposes. British baritone Christopher Purves makes his COC debut as Mime’s evil brother Alberich. The COC has informed us that American contralto Meredith Arwady, who sang the role of Death in the 2011 COC production of Stravinsky’s The Nightingale and Other Short Fables, will sing the role of Erda. American bass-baritone Alan Held sings Wotan, known in this opera as The Wanderer. Canadian bass Phillip Ens reprises the role as the dragon Fafner, who guards a golden hoard. COC music director Johannes Debus conducts his first Siegfried. Siegfried is sung in German with English surtitles and runs January 23, 27, 30, February 2, 5, 11, 14.