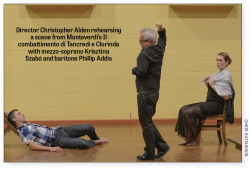 One of the most anticipated events of the opera season is the world premiere of Pyramus and Thisbe (2010) by Canadian Barbara Monk Feldman, staged by the Canadian Opera Company. It is the the first Canadian opera that the COC has produced on its main stage since The Golden Ass by Randolph Peters in 1999. This will also be the first Canadian opera ever staged in the auditorium of the Four Seasons Centre. In addition, this will be only the second opera by a female composer that the COC has ever staged, the first being L’Amour de loin (2000) by Kaija Saariaho in 2012, and the first ever by a female Canadian composer.

Pyramus and Thisbe is presented with two vocal works by Claudio Monteverdi (1567-1643), the Lamento d’Arianna (1608) and Il combattimento di Tancredi e Clorinda (1624). The first is the sole aria remaining from a lost opera by Monteverdi, while the second, though sometimes called an opera, is really a narrative sequence of madrigals. Both are company premieres. Krisztina Szabó sings Arianna, Clorinda and Thisbe; Phillip Addis sings Tancredi and Pyramus; and Owen McCausland sings Testo, the Narrator in Il combattimento.

American Christopher Alden, who directed La Clemenza di Tito for the COC in 2013, Die Fledermaus in 2012 and Rigoletto in 2011, is the stage director for Pyramus and Thisbe. I spoke with him in mid-September about the project.

About two years ago COC General Director Alexander Neef approached Alden about directing the works. Impressed by Monk Feldman’s score and the challenges it poses, Alden accepted: “It’s always exciting to be offered a brand new piece since 90 percent or more of my profession is dealing with pieces from the past where the composers are long gone and there have already been so many productions and interpretations of the piece you’re doing. So it’s a breath of fresh air to be offered the chance to be involved in the creation of a work yourself.”

About Monk Feldman’s work itself, Alden comments, “It’s an amazing piece, very unique and unusual and intensely abstract and non-literal. It’s the opposite of a new opera based on a film or something like that. Barbara has created a piece in a very strong modernist vein which is an exciting thing to come up against because it forces one to reach into different areas to find a way to bring this piece to life. It’s quite an exciting challenge.”

The idea of presenting the two Monteverdi pieces in conjunction with Pyramus and Thisbe was there from the start because, as Alden notes, “The idea was to pair Barbara’s piece which is on a mythological subject with other pieces that come from that same world. And each is about these different couples – Pyramus and Thisbe, Tancredi and Clorinda and Ariadne and (even though he doesn’t sing in this piece) Theseus. Three couples, all of whom have rather problematical relationships, are connected in illustrating Shakespeare’s statement that ‘the course of true love never did run smooth.’ After this, the idea came to us of tying the three pieces together even more by casting the same two singers as each of the couples.”

The works will be presented beginning with Arianna, followed by Il Combattimento and concluding with Pyramus and Thisbe. Faced with staging three pieces without an interval, Alden says he “started to come to terms with how to make a theatrical event out of these three pieces, on the one hand, letting each piece play itself out telling its own story, but also at the same time finding an overall shape to the evening, so that one piece leads into the next.”

There is no visual shift in moving from the works from the 17th century to the 21st. Instead, Alden says, “This production isn’t so much about any particular time period, but places all three pieces within a rather abstract, rather open-ended theatrical setting. It’s very simple, very stripped-down and very focused on the two soloists plus the third soloist Owen McCausland, the Narrator of Il Combattimento. Even though he sings only in the second work, we’re finding a way to give him [McCausland] some strong personal involvement in the whole theatrical event so that he is actually on stage for all three pieces.”

Alden notes that “the issues involved in each of these three pieces bleed in and out of each other – issues about relationships between men and women – with Il Combattimento (which is to me the ultimate piece about the battle of the sexes) in which there is a literal fight to the death between a man and a woman in the dead of night and the male doesn’t realize until the end that the guy he has been fighting is his beloved disguised as a male warrior. This raises so many interesting issues about male-female relationships that have such an aggressive aspect as if they were two mortal enemies, like two different species.”

“But,” he continues, “the flip side of the coin is their attraction to each other, their desire for each other. These issues about relationships float through the other two pieces, including Barbara’s. In Pyramus and Thisbe you have two people from families who are enemies and build a wall to separate them. Yet the two young people find a way to communicate through a chink in the wall – an amazing image about separation and two people finding a relationship despite all of the forces that get in the way of that desire that we all have, to connect with another person in a deep relationship.”

Monk Feldman’s work, nevertheless, is quite abstract as Alden points out. Although the story comes from Ovid’s Metamorphoses, Book IV, the libretto of the opera is made up of very diverse material including William Faulkner’s “The Long Summer” from The Hamlet (1940), St. John of the Cross’ Dark Night of the Soul (c.1578) and Rainer Maria Rilke’s Sonette an Orpheus (1923). In the preface to the score, Monk Feldman writes, “There is little or no drama: this opera is about the subtlety of the unconscious which substitutes for the wall in Ovid’s original, uniting as it separates the two lovers.”

Asked how he deals with such information, Alden replies, “There’s a lot more information than that. She’s been feeding me over the last year or so that we’ve been planning the opera. Barbara has very strong ideas about it and it’s been interesting for me, for once, not necessarily to be the sole auteur of an opera production which I’m directing (which I’m sort of used to by now), but also to have the writer right there with very strong feelings about it. It’s been a very exciting collaboration with Barbara.”

“It’s a fascinating challenge to bring to life this piece which is very abstract and written not as a conventional piece of theatre. It’s not about conventional theatrical tension, but rather it’s about creating a very sustained contemplative atmosphere, in a way very different from the Western theatrical tradition. The more ritualized tradition of Asian theatre has been an inspiration to me in thinking about her piece, to play it out in a somewhat more ritualized and detached way. That’s the challenge not just to me as a director but to the performers.”

“In the context of the whole evening, quite a bit of drama and conflict will already have been acted out in the Monteverdi pieces, so, in a way, in Barbara’s piece the male and female begin to move beyond that. Barbara’s piece is very much about transcending one’s ego issues and starting to move beyond them in a quasi-Buddhistic way and let go of all the patterns and cycles that we all get trapped in in our lives and to start to free ourselves up to find a different kind of relationship with existence and our worldly lives and ultimately our perceptions about mortality.” Mortality is symbolized in the opera by the lioness, which Pyramus mistakenly believes has killed Thisbe.

Monk Feldman’s Pyramus and Thisbe, preceded by the two Monteverdi pieces, plays from October 20 to November 7. The running time is only one hour, ten minutes without intermission. Johannes Debus will conduct.