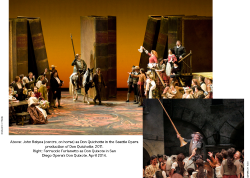 This May opera companies are presenting several works new to Toronto audiences.  One of the operas, East o’ the Sun and West o’ the Moon, is a world premiere, but the others are works from the early part of the 20th century making a very belated first appearance.

The first work of note is The Cousin from Nowhere by Eduard Künneke (1885-1953) receiving its Canadian premiere from May 1 to 4 by Toronto Operetta Theatre. The curious title is one of two English versions of the original German title Der Vetter aus Dingsda.  After the operetta’s great success first in Berlin in 1921, then Vienna, and then all over German-speaking Europe, it opened in London in 1923 under the title The Cousin from Nowhere.  In 2000 when the Ohio Light Opera revived it and later recorded it, the company used the title The Cousin from Batavia.  The problem is that the word “Dingsda” just can’t be translated compactly into English.  Just as we say “whatshisname” when we can’t think of a the name of a person, Germans say “Dingsda” when they can’t think of the name of a place.

What is certain is that The Cousin from Nowhere is one of the most delightful works from the Silver Age of operetta.  You need only listen to the excerpts on iTunes from the recording with the Kölner Rundfunkorchester to understand why the operetta was such a big hit.  Try the operetta standard for tenor “Ich bin nur ein armer Wandergesell” or the operetta standard for soprano “Strahlender Mond” to have a sense of Künneke’s gentle romantic side.  Then try “Sieben Jahr lebt’ ich in Batavia” for an idea of his clever satirical side.

The action is set in a small castle in Holland.  Julia (Lucia Cesaroni), heir to the castle but who has not yet come of age, is chafing under the rule of her aunt (Elizabeth Beeler) and uncle (Michael Nyby) who are her guardians.  She still dreams of her beloved cousin Roderich de Weert, who has been away in the Dutch colony of Batavia (in what is now Indonesia) for seven years.  Although she has sworn to be true to him, her aunt and uncle say she can’t wait any longer for Roderich.  Her uncle wants her to marry his nephew and a family friend wants her to marry his son.  One evening a mysterious traveller (Christopher Mayell) turns up looking for a place to stay.

Eventually, Julia begins to wonder if this traveller may actually be Roderich who has returned quite changed from the time spent in the Far East.  The traveller, however, denies it.  The next day, Julia’s best friend Hannchen (Charlotte Knight) arrives with a man who tells her that he is Roderich de Weert.  Who is the real Roderich and who is the impostor?  And what about Julia’s vow now that she has fallen in love with the traveller?  Those are the mysteries that the operetta poses and quite skilfully sorts out.

In Europe there have been five new productions of Der Vetter aus Dingsda since 2012.  The TOT production will be the first new production in North America since the revival of the extremely popular Ohio Light Opera staging in 2002.  As someone who has seen this charming work twice before, I urge operetta-lovers and anyone who loves the kind of 1920s dance music made popular by Max Raabe and his Palastorchester definitely not to miss it.  With Cousin, Jurgen Petrenko makes his TOT conducting debut and Guillermo Silva-Marin directs.

Bat-ta-clan postponed: In On Opera for April, I mentioned that from May 1 to 3 Opera 5 intended to present a pair of French operetta rarities in the form of Ba-ta-clan (1855) by Jacques Offenbach and L’Île du rêve (1898) by Reynaldo Hahn.  The performances were to inaugurate the new Alliance Française de Toronto Centre Culturel at 24 Spadina Road.  Unfortunately, the performance hall will not be ready in time, so Opera 5 has postponed the production until September.  Still on May 3 it will provide a preview of this unusual double bill at a party it is holding at Alliance Française at 8pm.  Teiya Kasahara and Adrian Kramer will sing accompanied by Maika’i Nash.

Bass Showcase: In its seventh and final opera of the 2013/14 season – and its last seven-opera season, for now – the COC is presenting Don Quichotte (1910) by Jules Massenet (1842-1912) for the first time.  The COC has staged only two of Massenet’s 28 extant operas – Manon in 1952 and Werther in 1981 and 1992.  Massenet wrote the opera with the great Russian bass Feodor Chaliapin in mind for the title role.  The work has since become a showcase role for a bass with Ferruccio Furlanetto, who will sing it in Toronto, as one of the opera’s premier proponents.  Quinn Kelsey, who won praise here in 2011 for his Rigoletto, will sing the aged knight’s trusty companion Sancho Panza and Anita Rachvelishvili will sing the role of Dulcinée, the lusty wench whom the knight imagines to be a fair damsel.  The colourfully whimsical production, set among gigantic books, comes from Seattle Opera and will be directed by Linda Brovsky, who directed it there.  COC Music Director Johannes Debus conducts.

East of The Sun: May concludes with the world premiere of East o’ the Sun and West o’ the Moon, a new children’s opera commissioned by the Canadian Children’s Opera Company. Based on the Norwegian folktale, the 70-minute-long opera is composed by Norbert Palej to a libretto by K.T. Bryski and has public performances May 30 to June 1.  Palej, originally from Cracow, Poland, is currently an associate professor of composition at the University of Toronto Faculty of Music.  K.T. Bryski is a fantasy novelist living in Toronto, best known for her novel Hapax (2012).

The folk tale was one of those collected by the Brothers Grimm of Norway, Peter Christen Asbjørnsen and Jørgen Moe, who published their collections of Norwegian folk tales and fairy tales between 1841 and 1871.  English speakers will likely best know the story from its translation by Sir George Webbe Dasent who gave its title to his 1910 translation of tales by Asbjørnsen and Moe.

The plot, a variation on Beauty and the Beast, concerns a young farm girl who saves her starving family by befriending a mysterious white bear, who promises to make her father rich if he gives him his daughter.  The girl knows the bear changes his form at night but it is too dark to see him.  One night she brings a candle and discovers that he is really a young prince condemned to take on animal form during the day.  Unfortunately, the girl’s lack of trust in him means he must now go to his wicked stepmother, the evil queen of the trolls who cursed him in the first place, and marry her daughter, a troll princess.  The young girl now must seek the palace of the queen of the trolls that lies “east of the sun and west of the moon” to rescue the prince.  CCOC artistic director Ann Cooper Gay will conduct a chamber orchestra and Joel Ivany, founder of Against the Grain Theatre, will direct.