Details
Written by Christopher Hoile
Category: On Opera
Published: 02 May 2013 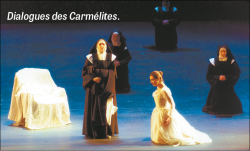 April has become a month so replete with opera that May, which used to be rather quiet, is beginning to fill up with opera as well. The Canadian Opera Company’s production of Salome continues to May 22 and its production of Lucia di Lammermoor to May 24. They are joined on May 8 by the final opera of the 2012/13 season, Dialogues des Carmélites. What is usual among the other offerings this month is the high concentration of 20th- and 21st-century operas.

Dialogues des Carmélites (1957) by Francis Poulenc has not been seen at the COC since 1997. The opera is based on the true story of the 16 Carmelite nuns of Compiègne who were martyred during the Reign of Terror on July 17, 1794. The upcoming production is notable for its high concentration of Canadian talent. The cast unites such stars as Isabel Bayrakdarian as Blanche de la Force, Judith Forst as Madame de Croissy, Adrianne Pieczonka as Madame Lidoine, Hélène Guilmette as Soeur Constance, Frédéric Antoun as the Chevalier de la Force and Jean-François Lapointe as the Marquis de la Force. Except for the role of Mère Marie sung by Russian mezzo Irina Mishura, all the remaining roles are sung by such well-known Canadian singers as Doug MacNaughton, Megan Latham, Rihab Chaieb, Michael Colvin and Peter Barrett.

The production is directed by Canadian Robert Carsen who created it for De Nederlandse Opera in 1997 and is designed by Canadian Michael Levine, who designed the COC’s Ring cycle. The physical staging is minimalist, relying on a few significant props and the use of light to set the many different scenes. Carsen’s staging, however, uses more than 100 supernumeraries to evoke the constant threat of the French Revolution that Blanche does not escape by taking the veil. The opera runs May 8 to 25 with Johannes Debus conducting the COC Orchestra.

Among the new operas is the welcome return of Laura’s Cow: The Legend of Laura Secord composed by Errol Gay to a libretto by Michael Patrick Albano. The 75-minute opera written for the Canadian Children’s Opera Company, premiered in 2012 during Luminato as part of the commemoration of the War of 1812. It was specifically written to include all levels of the 200-voice CCOC from oldest to youngest, with the addition of three professional adult singers. Emily Brown Gibson and Mary Christidis alternate in the role of Laura Secord, Andrew Love sings the roles of Caller, Balladeer and Lt. FitzGibbon as he did last year; and Tessa Laengert sings the delightful role of the Cow. Having reviewed the opera last year for The WholeNote blog, I can testify that it is an ideal opera for the whole family. Laura’s Cow runs from May 3 to May 5 at the Enwave Theatre. Michael Patrick Albano directs and Ann Cooper Gay conducts the 14-member orchestra.

From May 10 to 12, Toronto Masque Theatre presents the world premiere of The Lesson of Da Ji by Alice Ping Yee Ho to a libretto by Marjorie Chan. The one-act opera plays on a doublebill called “The Lessons of Love” with John Blow’s 1683 opera Venus and Adonis and thus provides a view of the masque from past and present, West and East.

The story is inspired by real events in the Shang dynasty (c. 1600–1046 bc). In the version by Ho and Chan, Da Ji, the king’s concubine, takes music lessons from the young nobleman Bo Yi to play the guqin, a type of zither. The king becomes jealous and exacts a grisly revenge on Bo Yi.

On May 14 and 15, the COSI Connection will present the world premiere of The Wings of the Dove by Canadian composer Andrew Ager based on the 1902 novel by Henry James. The story concerns Kate Croy and Merton Densher who are engaged but too poor to marry. The entrance of the rich but terminally ill Milly Theale complicates and completely alters the couple’s relationship.

Toronto audiences will remember Ager as the composer of the opera Frankenstein, first performed by TrypTych Productions in January 2010. When Ottawa’s Thirteeen Strings premiered the Interlude from the opera in 2011, the Ottawa Citizen declared, “It’s gorgeous, if intensely wistful. Ager’s writing is subtly layered, its emotions being persistent and powerful without ever venturing into a hint of melodrama.”  “COSI” stands for the Centre for Opera Studies in Italy that commissioned the work. Ager’s opera will launch the COSI Connection which intends to bring back to Canada the fruit of the labour and training Canadians have received at the centre in Sulmona, Italy.

The staged production at the Heliconian Hall in Yorkville will feature soprano Leigh-Ann Allen, baritone Bradley Christensen, soprano Clodagh Earls, mezzo Stephanie Kallay and baritone Dimitri Katotakis. Michael Patrick Albano is the stage director and the composer will provide the piano accompaniment. After the produc-tion in Toronto, the opera will be produced in July at COSI in Italy, with full orchestra, choir and soloists.

Opera by Request has several operas-in-concert on offer in May. There is Janáček’s Jenůfa on May 5, Mozart’s Così fan tutte on May 24 and Puccini’s La Bohème on May 27. The rarest of the offerings, however, is Douglas Moore’s 1956 opera The Ballad of Baby Doe on May 11. The plot is based on the true story of the “Silver King” Horace Tabor (1830–1899), who built the opera house in Central City, Colorado, his wife, Augusta, and the woman, Elizabeth “Baby Doe” McCourt, with whom Tabor had an affair before divorcing his wife. Lisa Faieta sings the title role, Keith O’Brien is Horace Tabor, Eugenia Dermentzis is Augusta and Tracy Reynolds is Baby Doe’s mother. All the Opera by Request performances this month take place at the College Street United Church and are accompanied by William Shookhoff at the piano. OBR takes a new step withBaby Doein that the performance will not be in concert but semi-staged, with Lisa Faieta as the director.

Those seeking out 20th-century operas from Spain need look no further than the double bill by Opera Five of Goyescas (1915) by Enrique Granados and El retablo de maese Pedro (1923) by Manuel de Falla. The singers include mezzo Catharin Carew, soprano Emily Ding, soprano Rachel Krehm, baritone Giovanni Spanu and tenor Conrad Siebert. Maika’i Nash is the music director and pianist.Aria Umezawa directs. Performances on May 1 and 2 take place at Gallery 345.

From May 2 to May 5, Toronto Operetta Theatre presents Offenbach’sLa Vie Parisienne(1866) as its season finale. Last staged in 1992, the new production stars Elizabeth DeGrazia as the Swedish baroness with Stuart Graham as her wayward husband. Adam Fisher and Stefan Fehr play Parisian rogues ready to show the two foreigners a good time and Lauren Segal is the glamorous comedienne, Métella, ready to gamble for love. Christopher Mayell sings the role of the billionaire Brazilian whose masked ball concludes the madcap proceedings. Larry Beckwith conducts TOT Orchestra and Guillermo Silva-Marin directs.