There were so many opera performances crammed into November that it may come as a relief to opera fans that the pace lets up a bit for the last month of 2012 and the first of 2013. The period takes on a distinctly Germanic flavour with the COC’s GrimmFest (a tribute to the 200th anniversary of the Grimm brothers’ collection of fairy tales), Toronto Operetta Theatre’s production of The Merry Widow and the COC’s production in January of Wagner’s Tristan und Isolde. The key, though, is that there is opera available to appeal to a wide range of tastes. 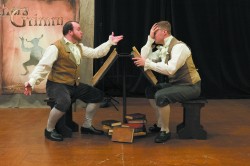 GrimmFest: December begins with the COC’s GrimmFest (coc.ca/GrimmFest) running from December 4 to December 8. The occasion is the 200th anniversary of the publication in 1812 of Kinder- und Hausmärchen (Children’s and Household Tales) by linguists, cultural researchers and brothers, Jacob and Wilhelm Grimm. One of the effects of the rise of Romanticism was research into folk traditions in an effort to uncover the strands of national identity. Besides that, people were aware that with the rise of industrialization, the traditions of an oral culture were gradually dying out and many scholars set out to record oral poetry and stories before they were lost. There is some dispute about the sources that the Grimm brothers used, but the result of their work gave us such famous stories as “Rapunzel,” “Hansel and Gretel,” “The Fisherman and His Wife,” “Cinderella,” “Little Red Riding Hood,” “The Bremen Town Musicians,” “Tom Thumb,” “Sleeping Beauty,” “Snow White” and “Rumpelstiltskin” among the two hundred tales collected.

The centrepiece of GrimmFest will be the 500th performance of the children’s opera The Brothers Grimm by Dean Burry. The anniversary performance by the COC Ensemble Studio takes place on December 7 at Daniels Spectrum in Regent Park with two more performances on December 8. The opera was commissioned by the COC in 1999 and has since become the most performed Canadian opera of all time. Wilhelm and Jacob Grimm are characters and the 45-minute opera shows how they were inspired to write “Rapunzel,” “Rumpelstiltskin” and “Little Red Riding Hood.” It has been a staple of the COC’s annual school tour since it premiered in 2001. In March 2012 it had its European premiere in Cardiff, Wales.

According to Burry, “When The Brothers Grimm premiered in 2001, I never expected that we would be celebrating its 500th performance 11 years later. It means so much to have been a part of this incredible journey and to have introduced so many young people to opera through the magic of these incredible fairy tales.”

Toronto Operetta Theatre (torontooperetta.com) will, as usual, present an operetta during the immediate pre- and post-New Year’s Eve period with a gala performance on New Year’s Eve itself. This year the work will be that ever-popular evocation of turn-of-the-century Paris, The Merry Widow (1905) by Franz Lehár. This will be the TOT’s fourth staging of the piece after productions in 1995, 2000 and 2007, bringing it equal with Johann Strauss, Jr.’s Die Fledermaus as the company’s most performed operetta.

Anyone who found the COC’s recent production of Die Fledermaus rather too concept-heavy should know that the TOT has always placed its emphasis on a work’s musical values above all else. The story involves the plan of the ambassador of Pontevedro, a bankrupt Balkan country, to find a Pontevedrian husband for Hannah Glawari, the country’s richest citizen, so that her money will remain in the country. With the current monetary crisis in the European Union, this amusing plot has acquired a strange new relevance. For the TOT production Leslie Ann Bradley sings the title role; former COC Ensemble member Adam Luther is Count Danilo, the man sent to woo her; David Ludwig is the ambassador Baron Zeta; Elizabeth Beeler, a former Hannah Glawari herself, is his wife Valencienne; and Keith Klassen is Camille de Rossillon, Valencienne’s admirer. Derek Bate, assistant conductor at the COC, conducts and Guillermo Silva-Marin directs. The operetta runs from December 28, 2012, to January 6, 2013. 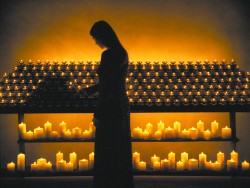 Tristan: One of the most anticipated offerings of the COC’s 2012-13 season is its production of Wagner’s Tristan und Isolde, the company’s first production of the masterpiece since 1987. This staging is also notable as the COC debut of renowned American director Peter Sellars. Sellars first created this vision of Tristan in 2005 for Opéra Bastille in Paris. Its most notable aspect is the use of a film by video artist Bill Viola that is projected on a colossal screen above the singers’ heads throughout the entire length of the work. The film can be justified on the grounds of Wagner’s goal of creating a Gesamtkunstwerk or “total work of art” in the theatre that would combine the various artistic disciplines. Wagner’s own view of the role of the visual arts in opera was rather conventional as can be seen in sketches of the first production of the Ring Cycle, where stagehands push the Rhinemaidens mounted on trolleys back and forth behind painted waves. Sellars’ notion is that Viola’s film will serve not just as the set but will provide an ongoing visual commentary on the action as a parallel to Wagner’s concept of the orchestra as chorus.

Using extreme slow motion, Viola’s video uses actors to portray the metaphorical action behind Wagner’s story. He views the first act as an extended ritual of purification for the two lovers, while on stage the two characters maintain a strained stance of indifference to each other. As one can see from the examples on the COC website, Viola makes much use of fire and water imagery. Viola’s video has accompanied concert performances of Tristan in Los Angeles in 2004 and in New York, Los Angeles and Rotterdam in 2007. Only at the Bastille Opera in Paris — and now recreated for the COC — has the video been used for staged performances.

Ben Heppner, who sang Tristan for the premiere of Sellars’ production in 2005, sings the role January 29, February 2, 14, 17 and 20, with German tenor Burkhard Fritz of the Staatsoper Berlin taking over on February 8 and 23. German soprano Melanie Diener sings Isolde on the same dates as Heppner with American Margaret Jane Wray taking over opposite Fritz. Franz-Josef Selig sings King Marke, to whom Isolde is engaged. Daveda Karanas is Isolde’s maid Brangäne, who misguidedly concocts a love potion for her mistress, and Alan Held sings Kurwenal, Tristan’s loyal servant. At the podium is the world-renowned Czech conductor Jiří Bělohlávek, who has recorded widely for Chandos, Harmonia Mundi and Deutsche Grammophon among other labels.

In his program note for the original production, Sellars described the love duet in Tristan by saying, “We hear the celestial voice of compassion expounding Buddha’s four noble truths to mortals.” Given the influence of Buddhism on Wagner via the philosophy of Arthur Schopenhauer (1788-1860), this statement is not as far-fetched as it might at first appear. Sellars aims to present Tristan as an exploration of spirituality, rather than sex as past directors have done. Whatever the result, the chance to see Tristan und Isolde in Toronto after such a long absence and to see Sellars’ work in our own Four Seasons Centre will start the new year on an aesthetic high.