One of the most notable developments in Toronto’s opera scene this season is Opera Atelier’s first-ever production of an opera from the 19th-century — Der Freischütz (“The Marksman”) from 1821 by Carl Maria von Weber (1786–1826). Even though the opera is standard repertory in central Europe, it has never had a fully staged professional production in Toronto as far as anyone can determine. The OA production will be the work’s first period production in North America. 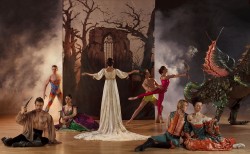 What marks Der Freischütz as the first important Romantic opera is its use of local folk legend as the subject matter, as opposed to classical history or mythology, and local folk music as inspiration for many arias and themes. Set in Bohemia near the end of the Thirty Years’ War in 1648, the story centres on the forester Max (Krešimir Špicer), who loves Agathe (Meghan Lindsay) and is set to succeed her father Kuno (Olivier Laquerre) as head forester if he can pass a test in marksmanship. During practice, however, Max continually fails and his fear of losing brings him under the influence of the malevolent Kaspar (Vasil Garvanliev), whose soul is already forfeit to the Devil and who hopes to substitute Max in his place. Max persuades Kaspar to cast seven magic bullets for him to use in the contest. This occurs in the mysterious Wolf’s Glen where Kaspar calls upon the infernal spirit Samiel (Curtis Sullivan) for assistance in the midst of frightening images and demonic sounds. Meanwhile, Agathe, filled with foreboding, is consoled by her friend Ännchen (Carla Huhtanen). The contest itself brings a series of unexpected mishaps but concludes with the advice of a wise hermit (Gustav Andreassen) on how to cope with the outcome.

In a telephone interview with OA co-artistic director Marshall Pynkoski, I learned how OA came to make this leap into the 19th century and how it came to choose Weber’s opera as its first experiment. Pynkoski says, “For a long time Jeannette [Lajeunesse Zingg] and myself and our designers had talked about the concept of a ‘period production.’ It’s hard to believe now, but our first conflict on this point came when we announced we were going to do a period production of The Magic Flute [in 1991]. People told us the idea was ridiculous, that the work was standard repertory and asked why we would do this. We had to draw a line in the sand and say, ‘No, we think there is a very important and legitimate statement to be made by hearing Mozart on period instruments and looking at a period-sensitive production that is unique and has not been said in a long time.’ Now no one even thinks there’s anything odd about Mozart on period instruments.

“Freischütz simply takes the basic concept of Flute and pushes the envelope farther which we’ve wanted to for some time. It’s been a long time since we’ve used the word ‘baroque’ in our company description. We call ourselves a ‘period opera and ballet company’ and our point now is that a ‘period production’ can be a reference to any period. That’s what fascinates. Of course, our initial focus was the baroque and that remains our first love, particularly the French baroque. But it is only natural as you start to explore these things that it keeps pushing you into new directions. It pushes you back and it pushes you forward, into earlier repertoire and into later repertoire. I think it’s a natural progression. The whole reasoning behind it is, ‘What was the original intention of the composer, of the librettist, of the designers? Where does it sit musically, dramatically, politically, artistically? What have we lost touch with over time? Have we lost anything worthwhile that is worth coming back to re-examine and that can challenge us in a new way?’

“I don’t want to do a museum production of Freischütz and I don’t think Freischütz will ever have looked like what we are doing. What we are doing is a Freischütz that explores all the possibilities that would have been open to performers in the early 19th century. Those ‘restrictions’ for want of a better word, have become the most thrilling take-off point, just as they were with Flute, and it has made us make huge jumps musically, dramatically and in terms of design. It’s taken us in directions we never dreamed we were going to go.

“Just to take one example: For the famous Wolf’s Glen scene, full of those wonderful, frightening satanic visions, there is no record of how they were created at the time. My first impulse was that they must have used a cyclorama, a huge painting that passed by on rollers. But such a technique would be far too expensive nowadays. Of course, we have our dancers and they are a tremendous asset. We thought of the magic lantern coming into use at the time, but slide shows have a negative resonance for us today that they did not have in the period. Then we thought if we use images what would they be of? Samiel is referred to as the ‘Black Huntsman’ so images of the hunt seemed natural. I looked at Géricault with his violent scenes of lions and cheetahs tearing animals apart, but they were too exotic. Then I thought of the crazy painting ‘The Nightmare’ by the Swiss-born British painter Henry Fuseli [1741–1825], an exact contemporary of Weber. The more I looked through his catalogue of works, the more I realized his visions of horror were a perfect match for the atmosphere Weber conjures up in the Wolf’s Glen. So it will be images from Fuseli that we will project on stage during that scene in the mode of a period phantasmagoria. We will be doing nothing that was not available to artists in the early 19th century. We will just be using 21st century technology to recreate it.”

How did OA come to choose Der Freischütz as its first foray into a new period? Pynkoski had considered doing a 19th century work for some time and had first considered Beethoven’s Leonore (1805), as the first version of his Fidelio is called. But it was conductor David Fallis, who suggested about three years ago that he and Jeannette Lajeunesse-Zingg have a look at Der Freischütz. What galvanized their attention happened in April last year when Krešimir Špicer was singing the title role in La Clemenza di Tito. Pynkoski, wondering when he and Špicer might ever work together again, said, “Kreš, tell me something you’re dying to do. We’ll do it for you. We just want you to come back. And he said instantly, ‘Well, I think you should be doing Freischütz and I should be singing Max.’” Pynkoski and Zingg went home, immediately listened to the CDs Fallis had given them, were overwhelmed by the work and told Špicer the next day they would be doing it — they didn’t know when — but they would be mounting it as a vehicle for him.

The 19th century may be new territory for Opera Atelier, but it is not for their orchestra, Tafelmusik. Tafelmusik has already played Beethoven’s symphonies to great acclaim and has programmed Chopin for next year. The most practical challenge is that the opera requires a 40-piece orchestra and David Fallis is still trying to figure out where to fit everybody in and around the pit at the Elgin Theatre.

Meanwhile, Pynkoski was bubbling over with news on a completely different topic. Two weeks after Freischütz closes, he and Zingg fly off to Salzburg to begin rehearsals for Mozart’s early opera Lucio Silla (1772), written when he was only 17. As it happens early music conductor Marc Minkowski has become the head of the Mozarteum in Salzburg. Ever since Minkowski first conducted for OA, he, Pynkoski and Zingg have longed to work together again, but Minkowski’s growing fame made scheduling trips to Toronto too difficult. Now he has asked the OA co-artistic directors to direct for him in Salzburg. Lucio Silla will premiere at the Mozarteum during Mozart Week on January 24, 2013, then travel to Bremen and Halle before returning to Salzburg in the summer.

But before that happens, Pynkoski and Zingg are focussing on Der Freischütz. Like The Magic Flute it is a singspiel, with spoken dialogue and sung arias. For Freischütz, the dialogue will be spoken in English and the arias sung in German with English surtitles. Flute and Freischütz make an excellent pairing. Both deal with the supernatural and both move from darkness to light, but Mozart’s focus is on the rational while Weber’s is on the irrational that lies just below the surface in everyday life. Der Freischütz runs from October 27 to November 3 at the Elgin Theatre. For tickets and more information visit www.operaatelier.com.