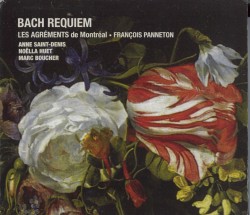 The sheer volume and inventiveness of Bach's work is astounding to us all. Yet we often ask the question: what else would J.S. Bach have accomplished given a different set of circumstances in his life? Those exploring the same question have interpreted Bach on modern instruments, jazzed up his rhythms, and substituted new lyrics. But what would Bach have created given a wider audience than his humble life in Leipzig as organist and schoolmaster provided? What if he were granted commissions beyond the scope of the Lutheran Church? We already have a hint of this with his Mass in B minor in Latin which he composed with the intention of widening his prospects.

It seems that scholar and conductor François Panneton has mused long and deliberately on this very question. The result is a Requiem that Bach could have written, given the opportunity. It is indeed his music; seamlessly patch-worked together are a number of movements from cantatas, keyboard works and the St. Matthew Passion organized into the standard requiem structure. As we know from Bach's cantatas, meditations on the agony and ecstasy of death appear frequently, and every chorus, aria and duet appearing in this work is chosen for its poetic similarity to the Latin section of the Requiem that replaces it, thus preserving the character. Thoughtfully crafted, beautifully performed, this recording provides a refreshing new perspective without compromising the integrity of the original sources.