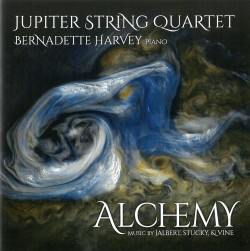 Being a devotee of the piano quartet and quintet I’m gratified to hear four fine 21st-century examples originally commissioned by the Arizona Friends of Chamber Music. The American-based Jupiter String Quartet and Australian pianist Bernadette Harvey play these demanding works vividly and expressively, their virtuosity suited to the brilliant motions that American composer Pierre Jalbert induces in his Piano Quintet (2017) and Secret Alchemy for Violin, Viola, Cello and Piano (2012). The players also excel in reflective passages and evocative sonorities, such as the “outer space” part of the Quintet’s Mannheim Rocket movement. In Secret Alchemy’s movement, Timeless, mysterious, reverberant, Jalbert’s miraculous mood creation suggests a medieval cathedral in modern terms. For me it brought to mind, uncannily, the Notre Dame Cathedral fire earlier this year.

Australian Carl Vine’s Fantasia for Piano Quintet (2013) is in a lighter vein which the composer describes as “quasi-improvisational.” Featuring plenty of idiomatic virtuosity, I found the work’s style more conventional with recurring four-bar phrases in the last two movements that could have stood a few metric surprises. Finally, I can only offer the highest possible praise for the late, Steven Stucky’s outstanding one-movement Piano Quartet (2005). A long, sorrowful melody begins shortly after the opening, broken into motifs yet somehow finding the strength to go on. This work is too rich to describe in words; I hope readers will find their way to hearing it.