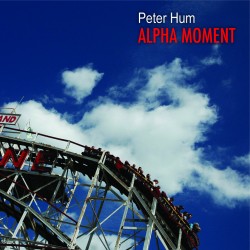 The following is an excerpt from Jazz 'eh (November 2015) which can be read in its entirety here.

Pianist/composer Peter Hum may be better known as a jazz and food critic for the Ottawa Citizen, but there’s nothing to suggest anything but full commitment to his art on Alpha Moment (peterhum.com). Hum leads a sextet here, and his group concept is almost orchestral. His compositions are well formed and subtly voiced, with solos arrayed against his own lush chords, Alec Walkington’s resonant bass and drummer Ted Warren’s constant sonic shadings. While the band’s members are currently spread out geographically, the group clearly came together at a special moment for the Ottawa jazz scene, much of the excitement coming from two Ottawa-raised saxophonists who have since moved on: Kenji Omae, now resident in Seoul, may be the most exciting tenor saxophonist to emerge in Canada in recent years, a powerful, impulsive player who’s also capable of lustrous ballad playing; Nathan Cepelinski, now a New Yorker, plays alto and soprano with quicksilver thought and phrasing. Along with glassy-toned Montreal guitarist Mike Rud, the six make up a terrific band, something that’s apparent everywhere here, but most pointedly on the aptly named title tune.

Saddest Day Of The Year