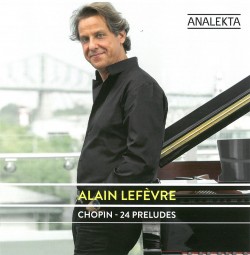 The following is an excerpt from a longer review of Chopin CDs which can be read in it's entirety here.

In fact, I would venture to say that the music of Chopin is a lot like wine – it is a result of the terroir, the quality of grapes and the winemaking technique. As for terroir, there is something magical when one hears that music at the Royal Baths Gardens in Warsaw, near the statue of Chopin (wrapped by two bronze weeping willows) or at Chopin’s family cottage in Zelazowa Wola, where his alleged piano is still in working order. Alas, that’s a pleasure not accorded to many. Still, there is something uncanny in the ability of Polish pianists to re-capture that ever-important terroir. Then there are the grapes – the beauty of Chopin’s writing was that no piece, no matter how slight, could be considered minor. The Minute Waltz, the Preludes, the Mazurkas or songs, regardless of length, command attention equal to that of the Piano Concerti. If all his scores are difficult, then the Mazurkas are particularly so, as their intuitive, internal rhythm has tripped up many a virtuoso. There is a reason, after all, for a separate award category for Mazurka interpretation at the Chopin International Piano Competition – a prize so elusive, that on several occasions it was not awarded. Finally we come to the winemaking technique. All three of the pianists in this review are no amateurs and their technique can be vouched for by the international prizes they have garnered – Ingrid Fliter was a silver medalist of the 2000 Chopin Piano Competition, Janina Fialkowska won the inaugural 1974 Arthur Rubinstein competition and Alain Lefèvre scored a JUNO, Prix Opus and ten (That’s ten!) Prix Felix. So, how do they fare?