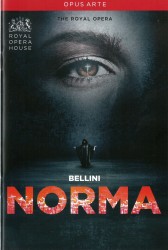 Ah, Norma, the opera with which young Bellini (merely 30 at the time) cemented his hold on Italian stages! He did create it as another vehicle for Giuditta Pasta, the foremost soprano of the time, yet she was followed by countless others including Rosa Ponselle, Maria Callas, Canada’s Sondra Radvanovsky, and now, Sonya Yoncheva. Breaking with Romantic and Classical tradition, however, is the fact that Norma is no damsel in distress. She is a force of nature, potent, fearless and terrifying. She is also in charge of her own, however tragic destiny. That alone is enough to experience the opera with goosebumps on one’s arm. Here, the director, Àlex Ollé of the famous collective La Fura dels Baus, chooses to present Norma as enmeshed in a religious and military apparatus, an intellectual choice. However, rather than presenting modern-day, right-wing evangelical orthodoxy, he gives us Spanish Inquisition-era ultra-Catholicism. This results in unintended humour and the need for even more of a suspension of disbelief: a woman, ordained as a top priest? So yet again, we are best left just listening to the music…

And what music! Pappano is the undisputed conductor-king of the operatic stage. The three principals are in fine form, especially Calleja, as a strong, commanding Pollione, rather than the frequently portrayed wimpy ladykiller. In the end, it seems that Yoncheva, though gifted with a silky and precise voice, does not have the dark notes with which Callas’ and Radvanovsky’s Normas strike fear in our hearts.