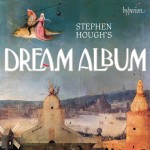 Pianist Stephen Hough’s Dream Album (Hyperion CDA68176 hyperion-records.co.uk) is an artful program of works by Liszt, Sibelius, Elgar and other familiar composers. The pieces are chosen for what Hough calls their “lyrical” or “hallucinatory” quality. Hough’s playing is utterly captivating and intensely intimate. He’s a magician, a tease, and a brilliant performer who creates an intoxicating dream world of pianistic expression.

The familiar repertoire items are exquisite and completely engaging – each one a gem. But the real impact of this recording is Hough’s own creative gift. Of the 27 tracks, around half are either his transcriptions or compositions. The scale of his ability to write in the language of the piano is astonishing. His fluency and enormous vocabulary give his compositions a rare potency. There are no extra notes, no empty, wasted phrases. Every element Hough creates is carefully and economically placed by his unerring musical judgment. This is the genius of his gift.

Listen to his arrangement of the traditional melody Blow the wind southerly and Strauss’ Radetzky March, and marvel at his musical commentary on the main thematic material. Moscow Nights gets the same treatment and undergoes a remarkable rebirth.

Niccolo’s Waltz is a witty nod to a Paganini Caprice, and Matilda’s Rhumba is a clever allusion to the famous Australian ode to the waltz, in march time! But my favourite is Hough’s Osmanthus Romp. Syncopated, highly energized and brimming with optimism, the composition captures the essence of Hough’s artistic soul.

This fabulous CD is going to get a lot of play. 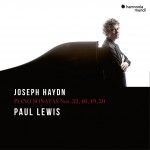 Paul Lewis has added another recording to his growing discography, Joseph Haydn Piano Sonatas Nos. 32, 40, 49, 50 (Harmonia Mundi HMM 902371 harmoniamundi.com). These four sonatas from Hob. XVI span nearly 20 years of Haydn’s career and provide a good example of how his writing evolved over that time. Lewis spends most of his effort in getting to the exploratory nature of Haydn’s style. He recognizes the relatively brief nature of the musical ideas and is mindful not to belabour them, favouring instead the timely pursuit of the next thought. While Lewis is careful never to miss an opportunity for a pause, tempo change or gentle landing, his intention is always focused on how Haydn is assembling his ideas architecturally, and how a disciplined rhythmic approach makes that happen effectively.

The Sonata in C Major No.50 is a fine example of how an opening movement strongly dependent on very specific rhythmic patterns can yield to a second movement seemingly free from those elements, before launching into a closing movement that restores the pulse of the work, rich with ornaments and arpeggios. Lewis’ complete command of keyboard technique makes the Haydn sonatas a joy to hear. His playing is as beautifully planned and organized as the composer’s ideas. His technique is clean and articulate, and his ability to find delightful moments of emotion would make Haydn blush. 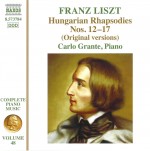 Franz Liszt Hungarian Rhapsodies Nos. 12-17 (Naxos 8.573784 naxos.com) is the latest addition to an enormous recording project of the complete piano works of Liszt. This disc, Volume 48, features Carlo Grante performing the Rhapsodies that Liszt wrote in the 1840s plus another from around 1871. Grante has nearly 50 recordings to his credit, covering all the major historical composers in addition to a number of contemporary ones.

Grante’s approach to the Hungarian Rhapsodies reflects careful thought of what Liszt was trying to express. These are not pianistic lava flows erupting from volcanic fantasies; rather, they are reflections on the phenomenon of “gypsy” influence in Hungarian music. Opinions of what this influence actually was have changed since Liszt’s time, but the elements Liszt’s music considers are easy to identify. Grante picks these out and interprets them convincingly. Folk dance rhythms, imitations of gypsy instruments like the cimbalom, and characteristic ornaments and phrasings all contribute to the atmosphere of Liszt’s 19th-century Hungarian national ethos.

The final track on the disc is Puszta Wehmut (Longing for the Steppes). While some consider it a miniature Hungarian Rhapsody, its real impact is as a work with a strong contemporary feel of the 20th century, still several decades hence.

Grante’s contribution to this Naxos series is very fine indeed. An additional noteworthy feature is that he performs on Bösendorfer’s newly engineered concert grand, the 280 VC. It has a consistently mellow tone throughout its range and an impressive ability to be mysteriously subtle. 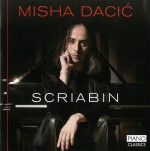 At 18, Misha Dacić was the youngest competitor at the 1996 Liszt Competition in Budapest, where he came to the attention of Lazar Berman who made him his student for the next six years. Dacić’s new recording Scriabin (Piano Classics PCL10136 piano-classics.com) is impressive evidence of this young pianist’s talent and creative intellect.

The decision to choose Scriabin for an early career recording is as courageous as it is risky – even more so when the repertoire spans most of the composer’s lifetime. But therein lies Dacić’s plan. Something about Scriabin’s artistic evolution appeals to him deeply enough that he wants to portray it in his program choices. The first six tracks are early works, etudes and mazurkas mostly, and are consistent with the technical challenges and forward-looking language of composers at the turn of the 19th century. The remaining ones cover the rest of Scriabin’s life up to his death in 1915. This is where the turbulence, only hinted at subtly in the early works, emerges more forcefully.

Scriabin uses every compositional technique to portray his growing personal turmoil. The music becomes denser, planned structure gives way more frequently to freer forms, and key relationships become more distant. Dacić embraces this journey of dramatic change with a startling command of the keyboard and a musical maturity beyond his years.

It’s a thoroughly captivating disc that should add Dacić to the list of Scriabin’s finest interpreters. 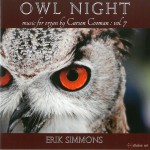 Organist Erik Simmons’ new release Owl Night – Music for Organ by Carson Cooman (Divine Art dda 25163 divineartrecords.com) is the seventh volume in this series. All the recordings use the digital modelling technology of the Hauptwerk system, enabling the recording to be made off-site. In this case, the Cavaillé-Coll pipe organ of 1882-85 in the Abbey of Saint-Étienne, Caen, France is the instrument featured on the disc.

Cooman is an American composer and organist whose output volume is astonishing. This recording presents recent compositions from 2016 and 2017. As a performer, Simmons has an affinity for contemporary organ music, and his exposure to Cooman’s work is extensive. The music takes full advantage, especially under Simmons’ hands, of the imaginative and emotionally evocative colouring of which the Abbey organ is capable. The title track Owl Night is an excellent example of this. Simmons uses a mellow flute rank to portray the extended hooting theme that recurs throughout the piece. Preludio Staccato is another example of the remarkable orchestral effects available on this instrument. Here, the mutation ranks create a lovely bell-like shimmer to the upper lines.

The repertoire is well chosen and makes for very satisfying listening as a digital concert. The Toccata, Aria and Finale that concludes the program is suitably grand, and even on a mid-range sound system there’s no doubt about the power and grandeur of this magnificent pipe organ. 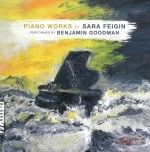 Benjamin Goodman is an Israeli pianist whose latest recording Piano Works by Sara Feigin (Navona NV6147 navonarecords.com) introduces a relatively unknown composer. Sara Feigin (1928-2011) was born in Latvia but fled with her family during WWII. Her musical gift was already obvious as a child. She developed this further while away from Latvia and continued it at the Riga Conservatory upon her return after the war. In the 1970s she settled in Israel, where she continued to compose and teach.

Goodman is technically superb and meets the challenges Feigin poses in her music. Written with the evident influence of French and Russian composers, Feigin’s language is predominantly harmonic but not without occasional challenges to traditional tonality. Goodman captures the poignant emotion in Feigin’s writing whether expressed dynamically or harmonically. It’s all music of great contrast with the points of tension and release set very far apart.

The Sonata is the work with the most formidable content. Four movements build gradually to an extremely intense and powerful conclusion. More than any of her other works, it reflects her experience of the tragedies visited on so many people in the middle of the last century. Goodman understands Feigin at a level deep enough to portray her experience in a convincing and appropriately troubling way.

When Alexander Gadjiev won the Ninth Hamamatsu International Piano Competition in 2015, one of his admirers credited him with the “ability to hypnotize the public.” His new recording Literary Fantasies – Piano Works, Liszt & Schumann (Acousence Classics 13117 acousence.de) is ample proof that this young pianist (b. 1994) is indeed enchanting. Gadjiev has assembled a program of works inspired by literature. Liszt’s Three Petrarch Sonatas begin the disc and immediately convey the impression that Gadjiev plays from some meditative place deep within. The feeling of introspection is unmistakable, particularly in the final sonata. The other Liszt literary-based fantasy is Après une lecture du Dante. Here Gadjiev is at full force, as Liszt needs him to be, for much of the work. But a brief tranquil section near the end offers a contrast that he exploits superbly, giving the finish the final impact it properly requires.

Two items by Robert Schumann also appear on the disc. The Op.16 Kreisleriana, full of opportunities for great expressive contrast, is highly effective, largely due to the extent that Gadjiev is able to withdraw into remarkably controlled pianissimos. Schumann’s Fantasy Pieces, Op.111, No.2 concludes the CD. The closing restatement of the opening musical material is so tenderly played that, if experienced as a live performance, an audience might never applaud for fear of disturbing the beauty of the final, lingering moment.

Krzysztof Jabłoński has a long list of achievements that reach back to his laureate designation at the 1985 Chopin Competition in Warsaw. His new recording Chopin Etiudy Op.10, 25 (The Fryderyk Chopin Institute NIFCCD 215 nifc.pl) is a rare example of astonishing keyboard technique, still fully capable of all that Chopin could ever demand.

While blinding speed is an impressive feature of any performance, Jabłoński demonstrates something else that leaves an indelible impression. There’s an unarguable correctness about all his tempos. Whether the dreamy Etude No.3 in E-Flat Op.10 or the meteoric descent of the arpeggios in Etude No.12 in E Minor Op.10, the tempo is always perfect for the piece. The secret, as Jabłoński has discovered, lies in simply knowing – feeling – what is right for the piece. In every instance he chooses a speed that causes no lost notes and no sense of rushing through tender moments, but that always connects to the deeper current of the music, conveying the notion that it’s going somewhere, that there’s a destination.

The Op.25 dozen etudes are as consistently perfect as the Op.10. Two that stand out are No.9 in G-Flat Major for its playfully light staccato touch, and No.24 in C Minor for the way Jabłoński brings out the inner melody while a torrent of arpeggios swirls around it.