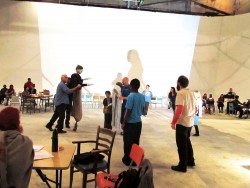 Like an Old Tale: An East Scarborough Retelling of The Winter’s Tale by William Shakespeare, (to give it its full title) is the latest chapter in Jumblies Theatre’s decade-long journey “to expand where art happens and who gets to be part of it.” Under the artistic direction of Ruth Howard, Jumblies undertakes multi-year residencies in a community, uncovering its stories and creating opportunities for the people of the community in question to turn those stories into art. “Every Jumblies community residency culminates with a large-scale production, one that melds original music, visual arts, dance, puppetry and projections into a vast theatrical realm.”

The idea that music and theatre often combine in forms other than “musical comedy” was on my mind when I entered the rehearsal hall of the St. Lawrence Centre to talk with 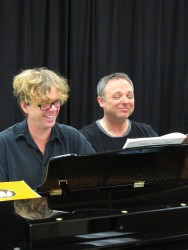 , the co-writers and performers of Two Pianos Four Hands (2P4H), arguably the most successful play in the history of Canadian theatre. Opening on November 2 for a limited run at Toronto’s Panasonic Theatre, before it moves to Ottawa’s National Arts Centre in January, the production marks the show’s 15th year, a remarkable milestone that has seen various incarnations of the piece accumulate close to 4,000 performances in 175 cities (worldwide) and play to upwards of two million people.

Though small in size, 2P4H covers a lot of ground as it traces the lives of two boys, Ted and Richard, in their quest for stardom as concert pianists. Working fervently towards their dream, the boys suffer pushy parents, eccentric teachers, repetitive practice, stage fright, nerve-wracking competitions and, finally, their own limitations. After 15 years of tinkling the ivories, they apprehend the gap between the very good and the great, only to arrive at the humbling conclusion that stardom lies beyond their reach. 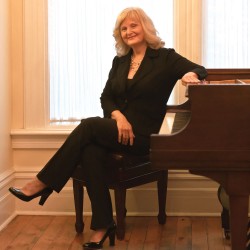 When we contacted Christina Petrowska Quilico early this past summer, she was, no surprise, busy on more than one front. For one thing, she was busy writing program notes for her 26th CD. The CD features two piano concerti written for her, by Heather Schmidt (Piano Concerto No.2) and by George Fiala (Concerto Cantata for piano, opera chorus and chimes). “I gave the world premieres for both pieces” she explained. “And I am stuck on finding a good title so that was what I was working on right now.”

“For another thing,” she said, “I am looking forward to taking one of my daughters to see Alice in Wonderland with the National Ballet of Canada. My daughters and I love the ballet and we have all taken lessons.”

“So no slacking off during the summer?” we asked. 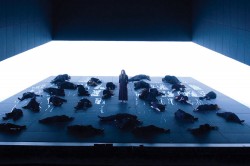 When Robert Carsen came to Toronto last spring to direct Gluck’s Orfeo ed Euridice for the Canadian Opera Company, it was the first time he had worked in his home town in almost 20 years. In 1992 he had directed the world premiere of Harry Somers’ Mario and the Magician for the COC. At that point, he was already being recognized as one of the most imaginative and exciting directors around. Today he is one of the busiest — last year alone he worked on 21 new productions and revivals.

I spoke with Carsen backstage at the Four Seasons Centre for the Performing Arts a few days before the opening of Orfeo ed Euridice. Though his work is controversial, he does not reveal any desire to confound or outrage anyone, least of all his audiences. Instead he seems intensely concerned about being understood.

Orfeo ed Euridice was a huge hit in Toronto. At the two performances I attended, the audience stood up and cheered at the end. Performances sold out, and it went on to win two Dora awards. But Carsen was already well aware of what a powerful production he was bringing to Toronto, since it had been first presented at Chicago Lyric Opera in 2006, and had been revived elsewhere a number of times. 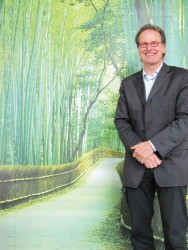 Douglas McNabney, violist is one of Canada’s distinguished chamber musicians. He has toured extensively throughout Canada, Europe, and the United States, and is a Juno — and Grammy-nominated recording artist. Formerly artistic director of the Domaine Forget International Festival and Academy, he is also coordinator of chamber music at the Schulich School of Music of McGill University in Montreal and a busy soloist and guest artist across Canada, the USA, and in Europe, with chamber music societies, ensembles, and (in past years) at summer festivals. He is also, now, the second artistic director of Toronto Summer Music in its five year history, succeeding Agnes Grossmann last fall, which has put a bit of a crimp in his summer touring, and a significant gleam in his eye.

Most significantly, though, for this story, the Toronto Summer Music Bloor/Bathurst offices, with their eye-catching mural, are just down the hall from The WholeNote’s digs, which made him an ideal and convenient starting point for WholeNote’s annual ramble down the highways and byways of summer music (and for the story’s main photograph). As is our custom, we have chosen to follow music’s makers in their summer peregrinations, posing the same four or five questions to each respondent. Here are McNabney’s responses, followed by “teasers” from the replies of others who responded in time for this magazine’s deadline. The story now takes up its home on our website where it will, if history is a reliable precedent, continue to grow and develop as the summer progresses.

What are we interrupting (i.e. taking you away from to write this)?
Still exhilarated after performing the Black Angels String Quartet by George Crumb with the SuperNova String Quartet at ScotiaFestival in Halifax ten days ago. Keeping in touch with managers and agents after last week’s ISPA conference in Toronto to book artists for 2012 TSM. Planning to find a successor at McGill for Jonathan Crow who has just been named the new TSO concertmaster. Establishing the incredibly complex rehearsal schedule for the TSM Academy and Festival, writing programme notes, getting my tux ready to attend the MadHot National Ballet Gala this evening … Oh yes, coordinating the pouring of new foundations next week for our cottage renovations …

What are you most looking forward to as an audience member between now and September 7? That’s like asking me which one of my children I prefer! … I’ve chosen artists and put every program together with such care — I’m dying of anticipation for each. Kiril Gerstein’s Toronto debut? Sir Tom Allen? Christine Brewer, our new Mentors and Fellows series where our young artists get to perform with the likes of Menahem Pressler, Anton Kuerti and André Laplante? I won’t want to miss one of those!

How about as a music maker/player? No question, the Mendelssohn Octet — the season finale of the TSM Festival with Jonathan Crow leading. Fireworks guaranteed!

What are you already preparing for beyond the summer? and (how) do your summer plans tie in? In terms of TSM, the Festival theme for 2012 and 2013 is already set and I’m starting to book artists in consequence. For my own performing, I’m looking forward to recording the complete Beethoven String Trios with Jonathan Crow and Matt Haimovitz, our third album after the Mozart Divertimento in 2007 and the Bach Goldberg Variations in 2009.