It happens every time after the Hallelujah Chorus in Handel’s Messiah. There are always audience members in tears – profoundly affected by the art and majesty of the music. There are not many other major works that have this effect, and probably none that are so beloved in Toronto. St. Michael’s Choir School performs Parts II and III of Messiah for Easter 2018,

having performed Part I during Christmastime 2017.

There’s a long European choral history of all-male choirs, commonly known as boy’s and men’s choirs. They’re a common feature in many churches and boys’ schools in Europe, for example in the Anglican tradition in the UK. They are not common in Canada, but a handful of Canadian boys’ and men’s choirs still exist. Few, anywhere, have such a storied history as St. Michael’s Choir School in downtown Toronto. Adjacent to the head of the Archdiocese of Toronto – St. Michael’s Cathedral Basilica – St. Mike’s Choir School has been generating high-quality musicians since 1937.

Peter Mahon, interim choir head at St. Mike’s, sat down with me over the March break to talk through their upcoming Messiah performance. I’m no stranger to Messiah myself, as a singer with the Toronto Mendelssohn Choir whose annual performances in Roy Thomson Hall with the Toronto Symphony Orchestra draw well over 8000 patrons over a week-long run. Mahon is also no stranger to the work as a singer: a veteran countertenor, he sings in the alto section of Tafelmusik Chamber Choir, whose own annual Messiah run reaches about 5000 patrons and includes the incomparable “Sing-Along Messiah” at Massey Hall.

Messiah is a big work, both technically challenging and requiring a high level of artistry. So, perhaps not surprisingly, as far as Mahon knows, the work has never been performed by the school. “It’s very easy in a place like St. Michael’s Choir School to only focus on what you do well,” says Mahon. “These guys have to basically do a performance every week, preparing for a mass; four or five pieces of music, and the older boys, at least two pieces of chant. You can focus on that mass preparation, and there’s loads of work to do.” Mahon relishes the challenge of introducing this beloved Toronto tradition to the choristers of St. Mike’s. “It’s nice to have a change of pace. I think they’re finding it very refreshing.”

The first half of Messiah, performed by the school this past Christmas, has six chorales that are conventionally performed. Parts II and III have about double that amount depending on cuts or additions. Unlike the Christmas performance, which numbered over 160 choristers, this time Mahon has assembled a smaller set of students, around 60, to present the work. The boys had to audition to perform in this concert. Any wrangling of children aged 10 to 17 is inherently challenging and Mahon appreciates that for this concert the boys want to be there, rather than have to be there.

Andrew Walker, an alumnus of the St. Michael’s Choir school program, returns as one of the two tenor leads at the core of the tenor section. Other Tafelmusik professionals joining in are Richard Whittall and Simon Honeyman on countertenor/alto; Paul Jeffrey, joining Walker on tenor; and Joel Allison and Keith Lam on bass. All of them are joined by the all-boy treble line on soprano. Whittall and Honeyman share the alto solos and Michael Colvin joins as tenor soloist. The only female-identified voice will be Meredith Hall as soprano soloist.

“I had never done Messiah before I did it with St. James Cathedral,” says Walker, joining me at a café before a Toronto Mendelssohn Choir rehearsal. He was introduced to the piece after leaving St. Mike’s. “We never did a major work or oratorio while I was there. It was always about providing music for the Cathedral. Even when we did our major concerts for Christmas or the spring or fall, it was pretty much always motets.”

Walker reflects on the power of being able to perform a work like Messiah: “I think it’s incredibly difficult to know what it really feels like until you have done it. In Grade 5, I was in intermediate choir. It’s the first year you start providing the music at the cathedral. But in Grade 5, to learn this music … Messiah is a great piece of repertoire to sink your teeth into, but it’s a big work to take on as one of the first pieces of music in just the first ten years of your life. It’s exceptional. It’s a good challenge and a testament to the teaching staff, Peter, Teri (Dunn), and Maria (Conkey).”

Mahon has added another challenge for the choir in this Messiah, by emphasizing Baroque interpretation and aspects of Baroque singing style: spacing between notes to give the music lightness and energy; more articulation on specific notes and less on others, to drive musical phrasing; and dynamic phrasing that tapers off at the end, appropriate to the fugal counterpoint common at the time.

“They aren’t doing badly on the Baroque interpretation – but it all takes some getting used to,” Mahon says. They are used to Palestrina and songs like that, he explains, but the great sweeping sounds of Renaissance music are dissimilar to the technical precision and nuanced phrasing of equal length notes that he is asking for here. After all, these choristers are being asked to acquire a cultural feeling for Baroque music that usually takes years to master. 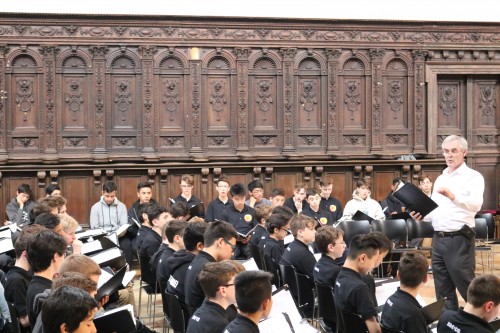 The fact that these boys are singing with an orchestra is already in itself exciting,” says Walker. “That a 13-year-old boy is being introduced to Baroque and period music is really something, and part of the mandate of the school. I think if you’re educating a new generation of singers, knowing about Baroque pitch is important.”

As a guide to matters of interpretation, Mahon has referred the boys to the Tafelmusik recording of Messiah, a close match to what he’s looking for. “It takes a little longer to teach them the music,” he says. “Getting them to do the style and actually understanding how to sing a Baroque phrase rather than a Renaissance phrase is quite hard.” It helps that Mahon himself led the larger contingent of choristers in the Christmastime 2017 performance of Part I so they are not entirely new to the art he’s looking for.

The boys are talented and excited, ready to delve into the work. They have been rehearsing since January. “It’s quite something,” says Mahon. “They’re so motivated, they know the music. In the fall, they auditioned with For Unto Us a Child is Born. This time around they auditioned with All We Like Sheep.” Walker is impressed to hear that the boys auditioned on that chorale: many singers consider the vocal runs in All We Like Sheep amongst the hardest sections of music in the entire score.

Walker reminisces about his time being back at St. Mike’s and what he would have felt like getting a work like Messiah to perform and having to audition. “I switched from being a treble in about Grade 8,” he says. “You are still a red jacket at that point. You get your blue jacket when you enter high school. At age 13, that these boys are actively wanting to sing this piece, and on top of that, can, is an incredible idea. It bodes well for the future of the choral scene in Toronto. What an honour it is to sing with a group of musicians and create this art together. The music lends itself to excellence, and to a really good show, to creating something magical. There are some moments in the piece that are life changing, and I don’t use that term lightly. What an amazing moment; how magical and momentous it is.” 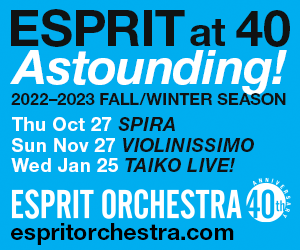