It is not everyday that you have the opportunity to sit and listen for five and one half hours to one slowing unfolding piece of music.  But that’s exactly what was happening at the Music Gallery in Toronto on October 14 as part of their X Avant VIII New Music festival.  The piece is called String Quartet #2, quite a nondescript title for something so epic, written by American composer Morton Feldman in 1983.

Undertaking this discipline of mind and body was the FLUX quartet from New York, who perform this ritual about once a year.  And what I heard via the grapevine after the show was that the players noted how attentive the Toronto’s audience was, with much less moving around than in other performances they’ve given. 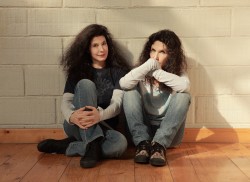 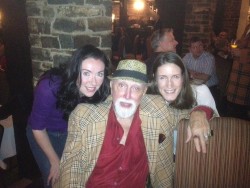 Watching Mark Murphy slowly weave his way through the Old Mill dining room to the stage, leaning on the arm of a helpful young man, is surely a testament to his own comment, “I’m eighty”. As he was seated carefully on his chair centre-stage with his music stand close by, I felt the wistful sadness of seeing this icon, a survivor of the classic era of jazz and one of a select few who can call themselves an innovator, on the decline. Yet Murphy’s first words to the audience were fully disarming and the opening phrase of ‘What Is This Thing Called Love’ completely erased my uneasiness. His is still the voice we know and love.

His characteristic tone – the way he almost cries out his notes, how he dips into his lower register then soars effortlessly into his falsetto – is clear and energetic. Age has not diminished his breath control, his ability to hold a straight note or his time feel. He sings with a seemingly careless ease.

His trio of relatively young players supported him flawlessly, consisting of Alex Minasian on piano, and two Canadians, Morgan Moore on bass and Jim Doxas on drums. Doxas’ sensitive style was particularly impressive, with seamless dynamic phrasing and flowing sounds that seem to simply appear.

Murphy is an expert craftsman who squeezes all there is from every syllable of a lyric. And squeeze the lyric he did on his aching performance of another Cole Porter standard, ‘I've Got You Under My Skin’. He introduced Porter as being "the best" and a "consummate composer" because he "controls all parts of the music", referring of course to Porter composing the chords, melody and lyric of each of his songs. While Murphy sang his unorthodox arrangement the room was silent. It was a spacey, tense version of the standard with an almost skeletal accompaniment by Murphy's trio. This spacious style, reminiscent of Shirley Horn with languid back-phrasing, with supremely relaxed, painfully slow tempos and with a nuanced approach to the lyric, was a recurring theme throughout the night.

Other notable ballads included ‘Turn Out The Stars’ (Lees/Evans), half-sung, half-spoken with strong hints of beat poetry, the devastatingly evocative ‘Again’ (Newman/Cochran) and a flirtatious version of ‘Fotografia’ (Jobim) which Murphy reprised later in the night using a different set of lyrics. Stepping up the tempo ever so slightly in George and Ira Gershwin’s ‘Stairway to Paradise’, Murphy demonstrated his uncanny ability of taking an old fashioned lyric and filling it with meaningful, modern feeling. He finds the delicacy of the idea, expressing it in the lighter and darker shades of a life rich in experience.

Well-known for his improvising, Murphy's scatting is both playful and direct at the same time. His somewhat mumbling syllables are really expressions in time, tone and intonation, and remind me of another jazz icon, Betty Carter. Murphy makes no distinction between interpreting a tune and improvising. He sings a little of the head then suddenly strays into his own melodies, throwing in ad lib lyrics and scatting. While performing ‘Stompin' at the Savoy’ at a quick, eyebrow-raising tempo for anyone familiar with the words, he tripped himself up by back-phrasing too far, and losing the lyric. He caught up by scatting a wee bit, and humorously playing the age card. It was charming when he sang, “What is this – I’ve gone to the other song again, haven’t I?”  He also touched on and improvised around his own famous lyrics in Oliver Nelson’s tune ‘Stolen Moments’ and Horace Silver’s ‘Senor Blues’.

During the break, Murphy sat amongst the audience shaking hands and signing autographs. We were delighted to have a little conversation and a picture with him.

The second set opened with Herbie Hancock’s ‘Maiden Voyage’. An indulgent, elongated ending set the tone for the rest of the show when Murphy interjected “Then suddenly everybody falls out of the boat” and went into an abstract scat. He obviously felt relaxed, with a glass of red and white on the go and sharing stories like the one about Tallulah Bankhead’s papier de toilette.

For his final song Murphy recalled the mood of longing and loss created in the movie Brokeback Mountain, then proceeded to perform a heartbreaking rendition of ‘Too Late Now’ (Lerner/Lane). It became clear that Murphy had masterfully created a mood of his own that evening, indulgent and tantalizing. After the warm welcome of the first set, we were treated to a tiny glimpse into his personality. At any moment he could plunge us into a new emotion, or surprise us with a pleasantly mischievous comment.

Murphy hadn't performed in Toronto in thirty years until this appearance October 1 at the Old Mill as part of the JAZZ.FM 91.1 Sound of Jazz Concert Series. He brought with him an expertise that could only be acquired from his impressive career which, at this point, spans six decades. He is currently working on a new recording with New York City vocalist Amy London, and his next Canadian dates are November 20 & 21, 2012 at the Jack Kerouac Festival in Quebec City.

Robert Wilson’s and Philip Glass’s seminal opera, Einstein on the Beach, made its triumphant Canadian debut Friday at the Sony Centre in a production that defies convention to this day, 36 years after its first performance. Filled with contemporary 1970s pop culture references from Patty Hearst to Mr. Bojangles to a list of NYC radio station WABC deejays, Einstein is both a timeless piece about time and a spacious piece about space.

Two days before opening night in a fascinating panel that uniquely chronicled the work’s origins by the three principal creators – dancer/choreographer Lucinda Childs is the third -- Wilson said its inspiration was “20th century god Albert Einstein.”  He explained that long duration plays always interested him – the production runs 4 hour and 20 minutes  -- and that he saw opera as an expression of its Latin origin “works” as in “including all the arts.”

Einstein comprises four acts and five brief  “Knee” connective interludes (Wilson calls them “close-ups”) and runs without intermission. The audience is welcome to come and go as it pleases. (Curiously, no one in the row I was in near the back of the Sony Centre’s main floor left their seats during the entire performance – except to stand at its conclusion.) The current production is the fourth since 1976 and the first since 1992. I was fortunate to attend the second at the Brooklyn Academy of Music in 1984, a mesmerizing experience as I recall. Based on that memory and recordings from the 1970s and 1992, this Luminato incarnation is indisputably the most musically proficient of the lot.

Wilson’s conceptual starting point for the opera, he explained at the panel, was a classical structure -- a theme and variations built around three images (a train, a trial and a field that would host a space machine). This solid foundation enables each scene’s individual elasticity to flourish. Wilson advised his audience not to look for meaning but to just get lost in it, quoting Susan Sontag: “To experience something is a way of thinking.”

Yet, Wilson did reveal that “On the Beach” alludes to the atomic bomb (specifically to the impending nuclear holocaust in Nevil Shute’s novel of the same name), that the train image is there because Einstein liked trains and that the lines of light, which slowly move in a myriad of ways throughout the opera, refer to time and space.

Wilson, trained as an architect, kept a notebook filled with drawings which were his ideas for Einstein’s visual content. When Glass came to compose the score at the piano he kept Wilson’s notebook in front of him. “The music came easily,” Glass said, attributing Einstein’s continued freshness after more than three decades to its being unlike any of their other collaborations.  “It’s sui generis,” he said.

Einstein appears in several guises throughout the work, as a young chalk-wielding theoretical physicist and as a sailing afficionado, for example, but most memorably as a violinist wearing what was (apart from the Beatles’ mop tops) arguably the most iconic hairstyle of the mid-20th century. The wig was worn by the prodigious Jennifer Koh (who played Spring and Summer from Vivaldi’s The Four Seasons with the TSO in March as part of a “What Makes It Great” concert).

In an impressive evening filled with time-bending stagecraft, energetic dancing that seemed to embody the “E” in Einstein’s most famous equation and unparallelled musicianship from soloists, chorus and instrumentalists led by Michael Riesman, Ms. Koh’s vibrant playing ranged from her forceful impeccably phrased repetitive cycles of notes -- a touchstone of much of the opera -- to the warmth of the haunting second theme in Knee 4.

Two days earlier at the panel, Glass explained that the violin becomes a touchstone since the most important thing for a musician was that Einstein played the violin. As to why many of the lyrics consisted of solfege syllables (doh re mi) and numbers, Glass recalled that it started as a teaching device to get the singers used to his idiosyncratic tone palette and complex time signatures. Wilson happened to walk in on a rehearsal and expressed his pleasure with the “lyrics”.  Glass kept them, the result of “my clumsiness and Bob’s naivete.”

Two more standouts in Friday’s performance were Andrew Sterman’s compelling tenor saxophone solo in Act 4, Scene 1 which soared Gato Barbieri-like as twenty-one people moved onto the stage individually or in pairs, stop-frame style and Kate Moran whose rendition of  “Prematurely Air-Conditioned Supermarket” elevated Lucinda Childs’s eight lines of Laurie Anderson-like seemingly trivial consumerist insights into high performance art. That most of it was delivered while lying on a bed in front of a judge in the second trial scene (Act 3, Scene 1) only made it more remarkable. It was my personal show-stopping moment.