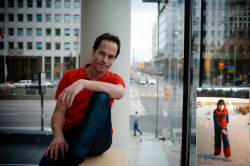 Johannes Debus, music director of the Canadian Opera Company Orchestra, speaks about his orchestra with love at a May 24 post-concert chat. “This great orchestra deserves to be onstage,” he says. The orchestra is one of the finest in the country, but is almost always in the pit of the Four Seasons Centre, barely visible to audiences. As part of 21C, the Royal Conservatory’s new music festival running May 24 to 28, the COC orchestra was onstage at Koerner Hall, fully visible and remarkable as always.

Mervon Mehta, executive director of performing arts at the Conservatory, is thrilled that the COC orchestra has appeared at Koerner Hall. What began as a phone call led to this concert, which featured mostly Canadian works as well as music by Unsuk Chin – the South Korean, Berlin-based composer whose work is the focus of much of this year’s festival. The performance marked the festival’s opening night.

“I tried to put together a menu that offers many flavours,” says Debus, who selected the concert program so as to bring out different themes within new music (rather than focusing ‘newness’ alone). American composer and poet Matthew Aucoin’s work The Orphic Moment had its Canadian premiere. The unusual choice of only one player in each of the 1st and 2nd violins and one viola was an odd pairing for the robust percussion demanded by the piece. The mallets featured prominently, played with athletic effectiveness by the musicians, dashing about onstage. The overall effect of this song was unnerving and creepy – not unsurprisingly, as it is meant to invoke a journey to the underworld.

Canadian composer Samy Moussa, whose piece Kammerkonzert was also on the program, was in town to catch the concert. A resident of Berlin for the last 10 years, he told the audience in the post-concert chat that Kammerkonzert was one of the last pieces he wrote before he left Canada. He reflects that his music since then has “become softer, more lyrical.” Kammerkonzert was chosen by Debus, who described it as an obvious choice for a new music concert. The compositional techniques at play, especially the numerous slides and pitch bends, make the piece interesting and exciting to listen to. It’s also not often that one sees a bass flute in action.

Unsuk Chin will later be featured in 21C with Soundstreams in the festival-closing concert, and was represented here by her piece snagS&Snarls, based on Alice in Wonderland. Emily D’Angelo, mezzo-soprano, provided a spirited, comical, and articulate performance. Her charismatic acting livened the work. Debus programmed Chin’s work not only because he knew she would be featured at the festival, but also because he describes her music as having “a sparkle…and a sense of humour.”

Debus chose Canadian composer Brian Current to open and close the concert. The opening was a new commission, the 2nd movement of the River of Light song cycle Current is aiming to complete in 2018. Naka is the Tłįchǫ word for the northern lights, and references Dene traditions from the Northwest Territories. Current’s inspiration has been the universal “fascination with transfiguration of light” common in most world religions. Naka opened the concert, preceded by drum thunder and the Canadian national anthem sung in Tłįchǫ by elders and members of the Tłįchǫ First Nation, who visited from the Northwest Territories. It also felt incredibly appropriate to have an Indigenous land acknowledgement read out by Mehta prior to the start of the performance.

The Elmer Iseler Singers excelled in both of Current’s works. Naka demanded their full attention and talent, requiring them to learn Tłįchǫ accurately from Elder Rosa Mantla. At times with open harmonics and swoops, the choir often evoked the northern lights themselves, providing ethereal, complex sounds at times. Positioned in the loft, physically above the orchestra, they seemed to be singing down into the world. The singers, with Lydia Adams at the helm, have consistently proven themselves the definitive choir for new and diverse music.

The closing piece was The Seven Heavenly Halls, the opening movement of the River of Light song cycle. Andrew Haji, tenor, was bright and expressive as the pilgrim journeying through the halls described in the Zohar. Special commendations go to the percussion players, who had more than enough work cut out for them. All of these songs included a fair amount of percussion work. The Seven Heavenly Halls in particular included three sets of steel pans, bells played with violin bows, sound tubes, and much more.

There is a powerful capacity for music to have difficult conversations about the relationship between newcomers, longtime Canadians and Indigenous peoples in this country. Richard Van Camp, a Tłı̨chǫ writer who served as librettist and narrator for the work, said it best: “What a perfect Canadian evening. This is how it’s done…when we listen and learn from one another.” With a little more intentionality and openness, opportunities like this can be the transformative light we so desperately need.

The Canadian Opera Company Orchestra, conducted by Johannes Debus, performed at the opening of the fourth annual 21C Festival at the Royal Conservatory of Music, joined by Emily D’Angelo (mezzo-soprano), Andrew Haji (tenor), Richard Van Camp (librettist and narrator), Elder Rosa Mantla, other members of the Tłįchǫ First Nation, the Elmer Iseler Singers and the 21C Ensemble, on Wednesday, May 24, 8pm at Koerner Hall in Toronto.