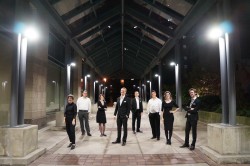 Last Saturday – in a world still reeling after the inauguration of now-president Donald Trump – Opus 8 provided a well-needed program of music centered on the theme of peace. Titled “Dona Nobis Pacem,” the concert was full of liturgical settings of the Agnus Dei. The choir was masterful in sound, warm and balanced in the church, and provided an uplifting power that filled and satiated the soul.

There’s something about singing sacred music in a sacred space – and the Church of St. Mary Magdalene is more important than most in Toronto’s choral music history. Healey Willan, now known for his catalogue of over 800 compositions, was choirmaster and organist at this church for 40 years. Elmer Iseler, who would go on to have a profound impact on the Toronto Mendelssohn Choir, the Amadeus Choir and of course, the Elmer Iseler Singers, was also a singer in this church’s choir.

On Saturday’s concert, Richard Dering’s Hei mihi! Domine provided a superb example of fine choral music making, with a controlled decrescendo towards the end of the piece. The echo and resonance of the sanctuary cradled the diminishing sound in the most inviting cocoon. Contrasted afterwards by Leonard Bernstein’s Agnus Dei and Dona Nobis Pacem (from his Missa Brevis), the following works’ strong forte sound was equally pleasing in a different way.

In between every couple of songs, one of the choristers would speak about the programming, giving snapshots of what to expect. This personal touch provided a lovely humanizing of the process, and helped bring some focus to the latter part of the first half, which was harder on the ear with unusual lines, byzantine influences, unusual cadences and dissonant endings in the Wellesz Agnus Dei and the “cacophonous” (as chorister Simon Honeyman calls it) Apostolo Glorioso by Guillaume Dufay.

The incredibly unusually setting of 3 or 4 adjacent semitones providing a sense of questioning and hesitancy in Robert Busiakiewicz’s Agnus Dei from his Missa Sapere Aude. The sopranos had more vibrato than the rest of the choir, which for me stood out particularly in Busiakiewicz’s piece. In music like this, the very specific pitches present a unique challenge for choristers; they require centering and little movement to hear their full effect.

The second half of the concert was by far the star of the show. The polyphony of Guillaume de Machaut’s Agnus Dei from Messe de Nostre Dame dates from the 14th century. The first ordinary mass written by one person, it is full of wonderful ascending and descending patterns. Opus 8 rose to its full potential here, with a lovely, balanced choral sound in the Cipriano de Rore Agnus Dei. Midway through, the voices mix into this cohesive, translucent, vibrating, sugary dessert. It is light and trembles in just the right way.

Other pieces on the program included Hosanna to the Son of David by Orlando Gibbons, Schien uns, de liebe Sonne, by Arnold Schoenberg, John Tavener’s The Lamb, and Herbert Howells’ Take Him, Earth, for Cherishing. The Tavener and Howells felt mostly congruent, with all voices moving most of the time together, while the Gibbons and Schoenberg felt messier to my ear – the more text, the muddier the sound, especially in a resonant church.

The choir finished with Josquin des Prez’s Agnus Dei from Missa L’Homme Armé. The gentle opening descending lines were perfectly executed. The work is supported by these ascending bass lines as the higher voices sing staggered, descending melodies. It is a bare composition, naked and exposed, but beautiful – and their performance of it proves that the singers of Opus 8 are stellar musicians.

I do not think that music director Robert Busiakiewicz had planned this concert to align with the American inauguration. I don’t think he could have possibly predicted that the theme of this concert would be so essential with a Trump presidency. But on this day of global protest against a dangerous world leader, it was here, in a church dedicated to a sex worker, that we found some rest and repose. This is the power of art and music: to be what we need, even when we don’t know we need it – and, through the process of creation and sharing, to help us find a way forward, even through the darkest times.