Concertmaster and soloist Leslie Dawn Knowles stands at the front of the string players, double stop melody soaring into the dome of the Church. The Toronto Mozart Players are having their first playthrough of the premiere of Farewell to a Soul Ascending by David Bowser. The Church of the Redeemer is a large open space with no obstructions between the audience and the stage. The feeling of spaciousness in the physical space is equally matched by the spaciousness of the composition. Bowser’s piece is one of three in the Toronto Mozart Players’ March 26 concert, a contemplative program on the emotional weight of loss. But also, as Knowles acknowledges, it is a program of ascension as well.

Bowser’s program is shaped by sharing the universality of loss. All three pieces he’s programmed speak to this, but it is his own premiere that he is most connected with. “The universal experience of loss is something we can all tap into, understand, and empathize with,” he says. “I think this piece is really talking about the experience of losing someone. The moments of reconciliation and new reality. There are a lot of climbing melodies and descending melodies. The upwards and downwards shapes are part of the struggle of recognition and acceptance.”

Bowser chose to write for solo violin and string orchestra. “I felt that strings were the most poignant. They’re the closest instrument to the human voice and give a lot of warmth and legato,” he says. It suits the sustained pitches in the piece that shape the emotions he’s trying to convey. This creates a technical consideration for the players to not only encourage the story, but also maintain the pitch over extended periods and give the notes the space required to be effective.

Knowles is equal to the task. “The biggest challenge is how sustained it is,” she says.
“Just the kind of calm it takes to do that and not be in a hurry to play notes and let the harmonies develop… It’s like when you’re going through a loss, it’s like time goes so slowly, the feeling... there’s no rushing out of it…You have to allow that sadness to happen...the calmness.”

Bowser has also crafted instances of silence in his music. “There are moments where it’s silent just for a moment,” he says, “and the contemplative moments after each movement of the Mozart. They’re not done attacca; they’re moments of just repose. And actually the silence is where we have these little moments that are valuable.”

Knowles appreciates this. “The silence is like the blank canvas,” she explains. “We have to have silence in order to process and be ready for what’s next.” She continues: “I’ve got places where I have to wait for the sound to clear before I play. It’s always, ‘better hurry up and play there’s nothing happening here,’ but no, the silence belongs here. Be patient. Just wait.”

But time continues, even when we feel the emptiness of loss. Bowser uses articulated eighth notes through the strings, usually in the double bass and cello, to give the feeling of movement. Bowser’s work evokes Samuel Barber’s Adagio for Strings and is reminiscent of John Williams’ main theme from Schindler’s List. The occasional moment of dissonance is enough to remind us that this is a song of unsettled feelings, and just enough to prevent the piece from wallowing in emotional heaviness.

Bowser leans strongly towards tenuto, legato phrasing in his piece, as well as in his interpretation of the Mozart Requiem. The relatively small set of players, about 20, playing in this fashion gives the music a sense of fullness. We will have to see if the legato will hamper the choir in the fugal runs, especially the opening Kyrie Eleison. The weighting and rallentandos at the end of some of the movements like the Dies Irae contribute to the overall spaciousness and fullness of Bowser’s interpretation and approach.

The higher strings are prominent throughout but are well balanced by the vocalists. The four soloists are pleasantly well-suited for each other’s voices. A darker depth to their voices helps their blend and matches well to overbalance of higher strings. The robust, harmonious sound comes across especially in the Recordare and the Benedictus. Soprano Andrea Núñez is the first soloist we hear; her warm and focused voice provides a great depth to the Introit. Lyndsay Promane provides a genuine and deeply satisfying sound matched by Dylan Wright’s active, rolling bass-baritone. Daevyd Pepper’s tenor voice carries clearly and almost over-effectively above the orchestra. These four are selected participants from the Toronto Mozart Vocal Competition.

Farewell to a Soul Ascending has another key theme, the connection of two people. Bowser wrote the piece specifically for Knowles on violin. It was her playing that he had in mind. “There’s not even words to describe what that makes me feel like. It’s humbling,” Knowles says, “to be trusted with something like this…it’s an honour…like being blessed with a child, a sacred trust.” They’ve been friends and colleagues for a very long time. They speak of being able to communicate with just a look and they are completely on the same page for this program.

“It’s an emotional rollercoaster – not in a violent sense, but in the quietness,” Knowles continues. “The opening is almost like a sob…It’s beautifully written. Very rewarding to play. Very zen-like. I felt comforted after playing it. There’s a real sense of peace.” Bowser adds, “It’s extremely uplifting and hopeful. There’s a lot of light in this music. There’s a lot of gratitude in this music. Even the Mozart Requiem contrasts between the vengeance and inevitability of judgement [with] the supplication of ‘please save us.’ There’s such a universality in that darkness and light.”

“Something that I’ve come to value in my experience with loss... to live the experience authentically and wholly seems to be the way through,” says Knowles, “this is also in the piece, to fully live the experience. Ignoring it doesn’t make it go away. There are certain things you have to go through. Knowing that other people have felt the same thing to is valuable and we’re able to share this and let people know that their feelings are valid. That’s what makes us human, that we do experience these things.”

Knowles speaks very highly of her fellow musicians. It’s easy to see her respect and deep love of the music she wants to share. “Rejoice that we have Mozart,” she says. “In a world full of things changing all the time and uncertainty, there are some things that remain constant. Things that break language barriers, distance barriers, and distances of time…come away with a sense of centeredness.”

David Bowser, artistic director of the Mozart Project, presents Mozart’s Requiem alongside a world premiere of Bowser’s own work, Farewell to a Soul Ascending, performed by the Toronto Mozart Players and the Hart House Chorus on March 26, 2017, at 2pm at Toronto’s Church of the Redeemer. 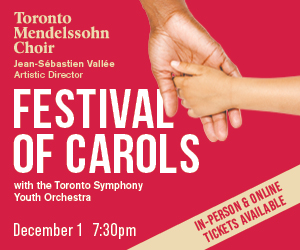