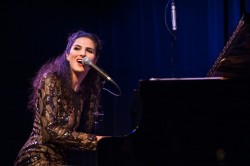 Pianist, singer, composer and arranger Laila Biali was born in Vancouver and has been celebrated worldwide, from the North Sea Jazz Festival to Tokyo’s Cotton Club and Carnegie Hall. She’s toured with Grammy award-winners Chris Botti, Paula Cole and Suzanne Vega, and has toured and recorded with Sting.

These days, seeing and hearing her is a profound experience, especially when she works in trio setting with such musicians as bassist George Koller, drummer Larnell Lewis, or her husband, drummer Ben Wittman. This is masterful, world-class music—accessible, soulful, intelligent and deeply moving.

Currently on the Laila Biali website there are dates posted in Australia, Switzerland, Poland, Germany—and Canada. After living in Brooklyn for a few years, Biali has recently moved back to Toronto, and is making her Koerner Hall debut on December 1. In addition to the musicians named above, she will be joined by trumpet ace William Sperandei, sharing the bill with Italian vocalist Pilar.

I wrote to Biali to ask her about her process, and about the music that inspires her to keep doing what she does.

Who are your three greatest musical inspirations and why?

Greatest three musical inspirations (though there are many and it’s hard to pick my top three!):

- Keith Jarrett. As a classically-trained pianist who moved into jazz later in life, I was inspired by Keith's ability to bridge the two worlds in a way that was familiar and compelling. When in college, I was so struck by the profundity and depth of his solo piano recordings, they would bring me to tears. His music touches a very deep place that transcends words.

- Björk. I'm not sure I've encountered a single artist as unblocked and free in their creative expression as Björk appears to be. She moves boldly and fluently through genres, various artistic media, science and technology, all the while creating art that is, in my opinion, a sumptuous feast for the senses.

- Joni Mitchell. No one tells a story like Joni does. Poetry and power, wisdom and whimsy, beauty and brashness all co-exist happily on her albums. She's a veritable force, a bright star within our great lineage of Canadian singer-songwriters.

You seem to be pushing yourself consistently to play, sing, write and arrange better and better...where does your musical motivation come from?
As a human being and as a musician, my primary desire and goal is to connect with others. Playing, singing, writing and arranging thus become instruments of communication and a means of connection within the world. I'm also driven by a thirst for the divine, and music provides a way of reaching beyond ourselves, to something greater.

When it comes to cover tunes, how do you select these?
I used to pick cover songs myself. [That] began when the CBC commissioned me to put together the project From Sea to Sky, which featured material from the Great Canadian Songbook (Joni Mitchell, Leonard Cohen, etc.). But now, I crowdsource covers through an initiative we call the “request-o-matic”. In short, I invite listeners to submit songs they'd like me to arrange personally and unveil at upcoming shows. A couple such songs have become fixtures of our live performances and are actually featured on the new album. You'll hear two or three of these at Koerner Hall on December 1!

For tickets to Biali’s December 1 show at Koerner Hall, head to http://performance.rcmusic.ca/tickets/seats/12403.

Ori Dagan is a Toronto-based jazz musician, writer and educator who can be reached at www.oridagan.com.