Readers of The WholeNote know me primarily as the Choral Scene columnist and an active participant in choral music in Toronto. My involvement and experiences in the rich cultural offerings of Toronto isn’t purely journalistic though, I’m also an avid theatregoer and it feels strange to me to go more than a few weeks without live art of some kind. This month I’m expanding our “What May Be” exploration beyond the choral world for some other touchpoints in the world of performing arts that I will miss. 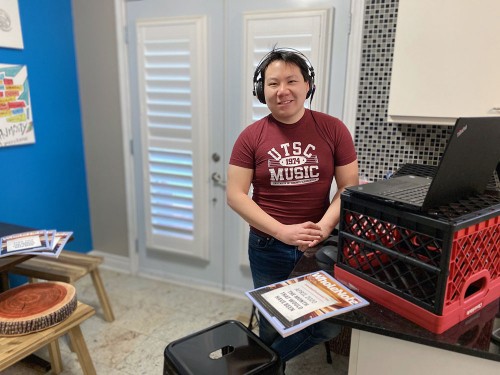 What Was, and Yet Again May Be, Thoroughly Enjoyed

The biggest theatre event of the year, hands down, was the Toronto arrival of the touring production of Hamilton. Toronto was home to the “Phillip” cast of the tour, and this was the biggest selling, most expensive set of tickets ever released for a Toronto music theatre show. The state of emergency happened a month into the Toronto run. I had early tickets in February, a trick of luck with the subscription my mom and I have had for a decade. And then I was lucky enough to catch it again when a friend’s tickets became available and my boyfriend snatched them up so he could see it as well. I’m lucky, so very lucky to have experienced this magnificent theatre magic twice.

The Ed Mirvish Theatre at its brim, all the way to the stools, with the truncating wall behind the mezzanine removed, holds 2300 patrons. In a week, Hamilton would have played to 23,000 people. Over the course of its three months this would have translated to 276,000 theatregoers. The magnitude of the loss is striking in numbers, and totally inconceivable in loss of experience.

The ramifications for theatre continue with the two-part Harry Potter and the Cursed Child openings planned for the fall of 2020 now postponed into the nebulous 2021. The all-Canadian cast was announced just before the state of emergency hit us in Ontario. The Wizarding World will stay beyond our reach for a little longer. Meridian Hall has the Toronto Symphony Orchestra still engaged for the film concert of Harry Potter and the Deathly Hallows for the end of October. It’s still to early to know whether this will proceed or not. It’s unusual to think this might be the next time I’ll be in the seat of one of our Toronto theatres enjoying a remnant of the pre-COVID-19 world.

One thing is sure, the appetite for Hamilton is still powerful. And Mirvish has said they will endeavour to bring it back. Maybe they will, with a permanent production next time, filled with Canadian talent.

What May Still Be A While Away

It’s no secret the Toronto Mendelssohn Choir (of which I am a member) has been without an artistic director for two years now. This choir is an important artistic partner to many arts organizations in the city, but also an important cultural treasure. Our entire season has been cancelled and this will have lasting effects as the artistic director search is also now postponed.

The painstaking, resource-intensive work of assembling a search committee, actioning the search, conducting interviews, narrowing a shortlist, and presenting candidates to the Choir and stakeholders for contention, is a long and arduous journey. This process began well over a year ago and is unlikely to conclude before a year from now. Mid-sized arts organizations like the Mendelssohn Choir are vital to the way that music sounds in Toronto. The musicians that make up this choir are found in every part of our cultural life. They are the teachers that empower young musicians in schools, the soloists that you hear in church every Sunday, the actors that liven up your stages, the doctors at the frontlines of pandemics, the journalists who toil at getting to the stories that affect everyday people.

There’s a magical connection between a conductor and musicians. Our colleagues at the Toronto Symphony Orchestra get to explore this new relationship with their new Maestro, Gustavo Gimeno. Soon enough, the TMC will get to know the gestures and facial expressions of their new conductor. After a time, the choir will learn to cohere around the meticulous downbeat of the hands, emotional flow along the lines and arcs, and create some truly beautiful music.

What You May Have Missed

The Toronto Symphony Orchestra has been performing some innovative and creative concerts that bring us closer to some beloved-worldwide cultural icons (while at the same time, bringing new audiences to the TSO). At the beginning of May, the TSO was to take on the bombastic score of the first of the newest trilogy of Star Wars films with 2015’s The Force Awakens. There are kids alive today who experienced Episode VII as their first Star Wars film. Followers of sci-fi epic sagas continue to fall in love with this series and the TSO started its play-through of the films in January 2019.

On April 10, 2020, Square Enix released a completely remade version of Final Fantasy VII. The cultural impact of this game is inseparable from the incredible power of its musical score. Nobuo Uematsu, the original composer, is one of the biggest composers in video-game music. The span of his talents covers boisterous opera, vicious Latin chorales, rock-infused riffs alongside 100-plus players in an orchestra and the simplest, loveliest of piano solos. For the remake, composer Masashi Hamauzu has taken the reins, enhancing and resetting the beloved music. Video games often have 30 hours or more of fully orchestrated music. Japanese composers like Uematsu and Yoko Shimomura may be unfamiliar to Toronto audiences, but are world-wide video-game icons.

Final Fantasy VII has sold almost 13 million copies since it came out in 1997. The remake is already at a third of those sales at the time of writing, ten days after it was released. At the end of June, the TSO was to perform the score for the new film at Roy Thomson Hall. This concert has been postponed indefinitely.

So, stay tuned readers of The WholeNote. What may be may still be far off, but then again, maybe not so far.