The opening Kyrie of the Bach Mass in B Minor is one of the hardest starts of any major work for a choir; with no starting pitch, the precisely placed hard “K” prior to any other sound, and careful phrasing that starts right away – the opening has much to say about how the rest of the performance will play out. Bold and full should be the effect. Bach’s masterpiece is not a light undertaking for any choir. This April, it’s safe to assume that Tafelmusik will take up this estimable work with its usual intense professionalism, deep artistry and impeccable technique.

“This is the seventh time Tafelmusik has [programmed] the Mass, with some 25 performances behind us,” shares Charlotte Nediger, Tafelmusik harpsichordist and organist. Instrumentalists and choristers alike relish revisits to Bach’s work, finding “new details and more depth in the score every time.” Nediger continues: “The Bach Mass in B Minor is a very challenging piece on every level, for all performers on stage …[It] demands an extremely high level of skill, virtuosity and artistry of every single singer, and the combined result is astonishing.”

Ivars Taurins takes the reins with early music soloists. Dorothee Mields, a German early music specialist, takes on the soprano. Laura Pudwell, Canadian, is the mezzo-soprano. English tenor Charles Daniels joins Canadian Tyler Duncan to round off the soloists. The essential horn solo in the Quoniam will be performed by Scott Wevers.

On the performance, Nediger concludes: “To say that it is inspiring is an understatement – it is also humbling, in the best sense. Tafelmusik is an ensemble in which everyone brings absolutely everything they can to every performance, and I think you sense that in the audience.” Nediger herself has an enviable position to take it all in, placed at the heart of the stage in front of the orchestra. With the surrounding forces of Tafelmusik Baroque Orchestra and Chamber Choir, she is uniquely positioned to enjoy the music as she works her way through the intense score.

Hilary Apfelstadt and the University of Toronto at Lincoln Center

Hilary Apfelstadt, (soon to be retiring) director of choral activities at the University of Toronto, last visited Lincoln Center, New York City, to perform as part of the Distinguished Concerts International New York City (DCINY) concert series for an International Women’s Day concert in March 2014. This month she returns for DCINY’s March 17 concert, conducting the combined forces of singers and orchestra in the major choral work on the program, Luigi Cherubini’s Requiem. Among the 200 singers from across the US and Canada, including the Luther College Choir from Regina, will be singers from Toronto’s Kingsway-Lambton United Church Chancel Choir and a few dozen singers from the four major choirs of the University of Toronto Faculty of Music. The Cherubini shares the ticket with a set of smaller choral works conducted by Martha Shaw, and the premiere of a concerto for flute, harp and orchestra by DCINY composer-in-residence Dinos Constantinides, led by DCINY principal conductor Jonathan Griffith. 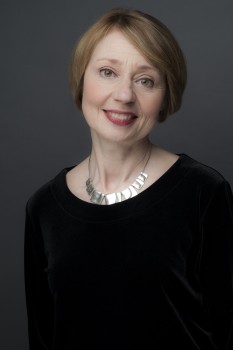 Of the Cherubini, Apfelstadt says: “It’s a lovely work, a little unusual, in that it has no soloists. The choir is singing almost nonstop. It was performed at Beethoven’s funeral because he admired it so much, but was originally created for the memorial of King Louis XVI of France.” This work follows the standard requiem format, but with Romantic and Classical elements reflecting the transition period beginning in 19th-century European music. The opening two movements are performed without violins. The deeper sound and broad crescendos provide a dramatic edge without the higher pitches. Apfelstadt also notes that the instrumentation lacks flutes, further contributing to a profound bass and heaviness in the music.

Early Romantic ideals are apparent in the bombastic Dies Irae, with the unusual programming of a gong. The same movement also shows a more classical ideal, with fugal runs and strings typical of Mozart and other classical contemporaries. The choir provides the dramatic energy of the piece, consistently singing in chorale throughout. The fugal runs of the Offertorium are particularly exciting.

Apfelstadt is mindful of the intense time commitments and existing rehearsals music students must juggle. “From a pragmatic point of view, when you’re teaching at school, you’re always trying to find things that are vocally challenging, without being overtaxing.” The goal is to set up the students for success and the Cherubini represents “a choral piece that is a challenge, with enough elements in it to be surprising.”

“They seem to like it, have a feel of accomplishment,” says Apfelstadt. “Virtually none of the students have encountered [Cherubini’s] work, or heard much about this composer. It’s really well written, bits remind me of Mozart, bits remind me of Beethoven. And because Beethoven was such a fan of the work, it’s like a stamp of approval.”

Those students who join Apfelstadt in New York will have the privilege of experiencing Lincoln Center from the stage. Here in Toronto, later in the month, on March 24 at the MacMillan Theatre, you can catch the entire massing of the four main faculty choirs, the Women’s Choir, the Women’s Chamber Choir, the Men’s Chorus and the MacMillan Singers, along with the University of Toronto Symphony Orchestra as they present the Cherubini Requiem. With 200 singers and the power of the U of T Symphony Orchestra at her fingertips, Apfelstadt looks forward to this performance capping off her distinguished career at the University of Toronto.

Mar 8 and 9: Soundstreams presents Tan Dun’s Water Passion. David Fallis helms this performance with instrumentalists and Choir 21. Dun has not often composed for choir and this complex work invokes the circular passage and flow of life, intimated by the story of Christ, and evoked by the presence and sound of water. Helmuth Rilling, founder of the Internationale Bachakademie Stuttgart, commissioned four new interpretations of the Passion of Christ from the four Gospels in 2000. Tan Dun was given the commission for St. Matthew’s. Mar 8, 7:30pm at the Isabel Bader Theatre, Kingston; Mar 9, 8pm at Trinity-St. Paul’s Centre, Toronto.

For a more conventional performance of the Bach St. Matthew Passion, Chorus Niagara under Robert Cooper performs it the week prior. Mar 3, 7:30pm at FirstOntario Performing Arts Centre, St. Catharines.

Mar 28 and 30, 7:30pm: The Toronto Mendelssohn Choir presents “Sacred Music for a Sacred Space.” All the choristers (myself included) always love this annual Easter tradition. Performing on Good Friday, in the aural and visual splendour of St. Paul’s Basilica, maintains an annual tradition of emotionally deep a cappella music presented by Toronto’s finest. Artistic director Noel Edison has programmed a horn of plenty including Eric Whitacre’s Sleep, John Tavener’s Song for Athene, Rachmaninoff’s Bogoroditse Devo and works by Bruckner, Mendelssohn, Łukaszewski and others.

Mar 30, 3pm: The Trinity St. Paul’s United Church Choir are joined by VIVA! Youth Singers and the Oakville Choir for Children and Youth in presenting “Good Friday Choral Concert.” Part of the programming is Andrew Balfour’s Take the Indian: A Vocal Reflection on Missing Children, a remarkable piece built from the pain of the Canadian government’s residential school atrocities and the longstanding institutionalized racism and neglect of missing and murdered Indigenous women and girls. Balfour, himself an Indigenous child taken by and into state care, is artistic director of Camerata Nova, an early, contemporary and Indigenous-infused music ensemble based in Winnipeg. Balfour is being brought in to help prepare the choirs. If sufficient weight is given to the work’s performance, its power and its discomforting narrative, I anticipate a significant and moving display.

Mar 31, 7:30pm: The Guelph Chamber Choir bids farewell to conductor Gerald Neufeld after 37 years at the helm. Neufeld, a longstanding music educator, has taught in the faculties at the University of Guelph and Western University. His final performance will be Brahms’ masterpiece: A German Requiem at the River Run Centre, Guelph.