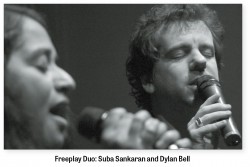 In a month when The WholeNote Canary Pages celebrates choral music and and features opportunities to participate in it, it’s fitting that there’s an incredible amount of amazing choral performance happening around the region. In this month’s column, on top of some great quick picks, SING! The Toronto Vocal Arts Festival runs throughout most of the month; I’ve dug into the fantastic upcoming Royal Conservatory 21C Music Festival launch featuring the Canadian Opera Company Orchestra, Elmer Iseler Singers and the 21C Ensemble; and finally, Elisa Citterio, Tafelmusik’s new artistic director takes the stage for Mozart’s Mass in C Minor. What a bounty indeed!

SING! The Toronto Vocal Arts Festival makes its return with events between May 11 and 28. This year marks the first for artistic directors Dylan Bell and Suba Sankaran, partners in FreePlay Duo, and masters of jazz and a capella arranging. “What makes SING! stand out is the sheer array of vocal artistry we offer in our various programs,” says Sankaran. “The ‘SING! In Concert’ series offers world-class groups from New York, and from our own backyard. ‘SING! In The Clubs’ offers a more intimate vocal experience, while ‘SING! Free,’ in the Distillery District, offers a weekend of multicultural and multi-stylistic acts, representing Canada’s unique cultural diversity, all free to the public. And ‘SING! and Learn’ offers educational outreach to schools, as well as public masterclasses where participants can work face-to-face with some of the greatest vocal ensembles in the world.”

During the festival, organizers hope to break two Guinness World Records: the most nationalities singing a national/regional anthem simultaneously; and the most nationalities in a simultaneous popular music sing-along. Bring your passports to show Guinness adjudicators and get ready to belt out O Canada. The pop song will be Rise Up led by Lorraine Segato, formerly of Parachute Club. On May 13 at 1pm, Distillery District Stage. Free!

Give Me A Head With Hair (please!)

Segato will also perform as part of the “O Canada! The Golden Age of Canadian Pop” concert, May 25 at the St. Lawrence Centre for the Arts. Organizers have gathered the members of the original Toronto cast of Hair which premiered here in 1969. The musical, which opened Off-Broadway in 1967, shaped a generation and provided the groundwork for the modern musical as we know it, creating a fusion of rock, culture and social commentary in music theatre. This is a remarkable chance to see the cast throw back 50 years.

“We’re pleased to be a part of this one-of-a-kind festival celebrating vocal talent from Toronto and around the world, bringing the best performers and facilitators together at Canada’s premier a cappella festival,” says Bell. “We look forward to bringing our experience and observations to SING! Toronto, and to building on the momentum of the last six years to make SING! 2017 the best festival yet.”

The Royal Conservatory’s new music festival, 21C, is a gem of contemporary art, now providing its fourth year of programming with nine concerts, five days, 31 premieres, (12 world premieres) and 90 percent Canadian artists. Mervon Mehta, RCM’s executive director of programming, says, “We are thrilled to welcome the Canadian Opera Company, the Canadian Art Song Project and Soundstreams as our artistic collaborators and to have Unsuk Chin, a composer of international stature, in residence.”

The festival begins May 24 at 8pm in Koerner Hall with Johannes Debus conducting the Canadian Opera Company Orchestra and the Elmer Iseler Singers with Lydia Adams, conductor and artistic director, and the 21C Ensemble. Featuring a host of Canadian and international composers, this promises to be one of the highlights of the festival. The concert will feature the Canadian premiere of American Matthew Aucoin’s The Orphic Moment taking inspiration from the “primal self-justification and self-glorification” of the story of Orpheus and Eurydice. Aucoin calls this a “dramatic cantata” exploring what would have happened if Orpheus had made the conscious decision to turn around escorting Eurydice back to the living as a deliberate choice of ultimate tragedy and, ultimately, of unparalleled inspiration.

The evening also features Toronto-based composer Brian Current presenting the world premiere of Nàaka (Northern Lights), the third movement of his River of Light multi-movement cycle, projected to be completed in 2018. Based on Dante’s Paradiso, Current’s inspiration for the entire cycle is the line: “And I saw a light in the form of a river, radiant as gold, between banks painted with wondrous springs.” Current furthers his thoughts on the piece: “No matter where we come from, or whom we pray to, a fascination with transcendence into light permeates nearly all of our religious beliefs and unites us. We are all part of the River of Light.”

Richard Van Camp, an indigenous storyteller, and Elder Rosa Mantla, both of the Dogrib (Tłįchǫ) First Nation in Fort Smith, Northwest Territories, provided language and cultural contexts for Nàaka. Recognizing the deep cultural and physical relationship of the northern lights to the Tłįchǫ, Nàaka forms the Canadian contribution to the River of Light cycle.

The concert will also include Current’s The Seven Heavenly Halls, another movement of River of Light, which won the inaugural Canadian Azrieli Music Project Prize in 2015. The Seven Heavenly Halls (2015) was inspired by the Zohar (The Book of Enlightenment), the most important work of Jewish mysticism (Kabbalah). Central to the story is the concept of the Sefer Hekalot (the Seven Heavenly Halls) described loosely as the complexity of forgiveness within light, figurative and physical. Current describes the work as “a 12 minute journey for choir, orchestra and solo tenor based on the Zohar that traces a mystical progression where each of the seven ecstatic states is described by an orchestral colour.”

A momentous occasion is upon us May 4 to 7 in Koerner Hall with Italian violinist and early-music specialist Elisa Citterio taking the reins of Tafelmusik Baroque Orchestra and Chamber Choir for the first time at Koerner Hall since her appointment as artistic director. Marking the end of Tafelmusik Chamber Choir’s 35th season, Citterio and Ivars Taurins lead the inimitable Mozart Mass in C Minor and Haydn’s Symphony No.98 in B-flat Major. British sopranos Julia Doyle and Joanne Lum are joined by Asitha Tennekoon, tenor, and Joel Allison, bass-baritone, as soloists. Don’t miss these performances!

There are a host of music-theatre-themed concerts in May.

May 6: The Oakville Children’s Choir presents a fun set of showtunes in “The Best of Broadway!”

May 6: Further east, the Mississauga Festival Choir is also presenting pops in “From Broadway to Hollywood” at the Living Arts Centre on the same day.

May 7: Even further east you can catch Florivox, a treble choir, in “Be Our Guest” featuring songs from popular musicals like Wicked and Hamilton.

May 10: The Cardinal Carter Academy for the Arts presents Missa Gaia/Earth Mass featuring 170 voices and the premiere of Paul Halley’s In the Wide Awe and Wisdom of the Night.

May 17: Elite ensemble Opus 8 presents another free concert in their series “H2O” – described as “no mere offering of sea shanties, but a phantasmagoria of all things aquatic, shipwrecked and watery.” If you didn’t know what a phantasmagoria was (like me) it’s a series of images like those of a dream.

June 2 and 3: Right at the beginning of June you can catch the Toronto Symphony Orchestra and the Toronto Mendelssohn Choir (in which I sing) with guests, the Huddersfield Choral Society in William Walton’s bombastic Belshazzar’s Feast. This huge British work will be led by conductor laureate Sir Andrew Davis. Part of the continuing Decades Project, this epic work was chosen by Peter Oundjian forthe decade 1930-1939. Later, at the end of June, Carmina Burana featuring the Toronto Mendelssohn Choir finishes off the Decades Project for the 2016/2017 season.